Persians Win the Battle of Karnal

The Battle of Karnal (February 24, 1739), was a decisive victory for Nader Shah, the emperor of the Iranian Afsharid dynasty during his invasion of India. The Shah's forces defeated the army of Muhammad Shah which was roughly six times the size of his own in what is regarded as the crowning achievement in a spectacular military career. the Indian army was lured into battle in segments and defeated in detail, in little more than three hours, paving the way for the Afsharid sack of Delhi. The battle took place near Karnal, 110 kilometres (68 mi) north of Delhi, India.
The Mughal army was lined up with Sa'adat Khan forming the right wing, which was in the extreme east and near the Yamuna river. Khwaja Asim Khan Dauran's division stood in the centre, while the Vizier Qamar ud-Din Khan and the Emperor took up the left wing along a canal.
The Persian right wing was placed under Tahmasp Quli Jalair, whilst the left wing was under Fateh Ali and Lutf Ali Afshar. Nader's son, Nasrullah, commanded the centre, whilst Nader commanded the vanguard himself, which consisted of 4,000 cavalry.
Persian preparations

Nader Shah at the Battle of Karnal in Chelsotoon Palace, Isfahan

* * * The Mughals' main weapon was their war elephants therefore Nader Shah ordered camels to be paired together and platforms constructed between them. A mixture of naphtha combustibles was placed on the platforms with orders to set them on fire during the battle so that the Mughal elephants would flee at the sight of the fire and cause mayhem in their own army.
Additionally, Nader Shah placed 3,000 of his best troops in front of his main position thus giving them a clear line of fire on the Mughal dispositions.

* * * Mughal preparations
The Mughal Army before the Battle of Karnal against Nadir Shah comprised 200,000 cavalry and 1,500 elephants, the Mughal Emperor Muhammad Shah used eight thousand pieces of artillery, which were drawn by elephants and oxen.
The battle
This section needs additional citations for verification. Please help improve this article by adding citations to reliable sources. Unsourced material may be challenged and removed. (February 2015)
The battle began a little after one o'clock in the afternoon, with a discharge of arrows on both sides. The Persian cavalry carried out a ruse of feigning flight. Sa’adat Khan gave chase and was ambushed three or four miles east of the imperial camp, well outside the covering fire of the Mughal artillery. The Persian cavalry drew aside and the pursuing Mughals found themselves in front of Persian guns at point blank range.
The Mughal vanguard fled but their commander, Sa’adat Khan, was able to keep his ground. However, his forces were also forced to withdraw and the extreme right wing of the Mughal lines collapsed. Khan Dauran's division in the centre of the battlefield was also forced to withdraw. 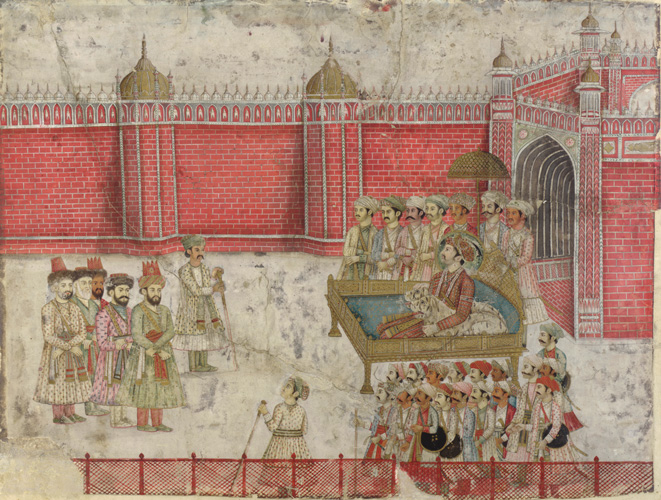 * * * The murderous fire of the Persian gunners continued for two hours. The Mughals fought bravely but were unable to respond effectively to the Persian guns. Khan Dauran was mortally wounded and brought back to the camp where he later died.
Mughal disarray
The concentrated fire of the Persians contrasted sharply with the disorganisation of the Mughals as their chief divisions were separated from each other on the battlefield by more than a mile. Mughal forces began to disintegrate as they proved incapable of responding to the Persian attacks on their lines. Khan Dauran was not able to co-ordinate with Sa’adat Khan and Asaf Jah I was inactive and gave no help to either Khan Dauran or Sa’adat Khan.
The Persians attacked sharply at those points in the battle lines where the Mughals were at a numerical tactical inferiority and were beyond the covering fire of the Mughal artillery. Mughal generals mounted on elephants became easy targets for Persian attacks whilst the Persian cavalry was swifter and out-manoeuvered the Mughals. The Mughal commander, Sa’adat Khan was taken prisoner by the Persians after his elephant was driven into Persian ranks by the out of control elephant belonging to his nephew.
With the loss of Sa’adat Khan and Khan Dauran, Mughal morale plummeted, the army started to disintegrate. Mughal camp followers started to loot their own camp whilst Mughal soldiers fled the battlefield heavily pursued by the Persian cavalry who inflicted a great slaughter. The Emperor, who had remained inactive throughout the battle, was captured by the Persian army.
Casualties 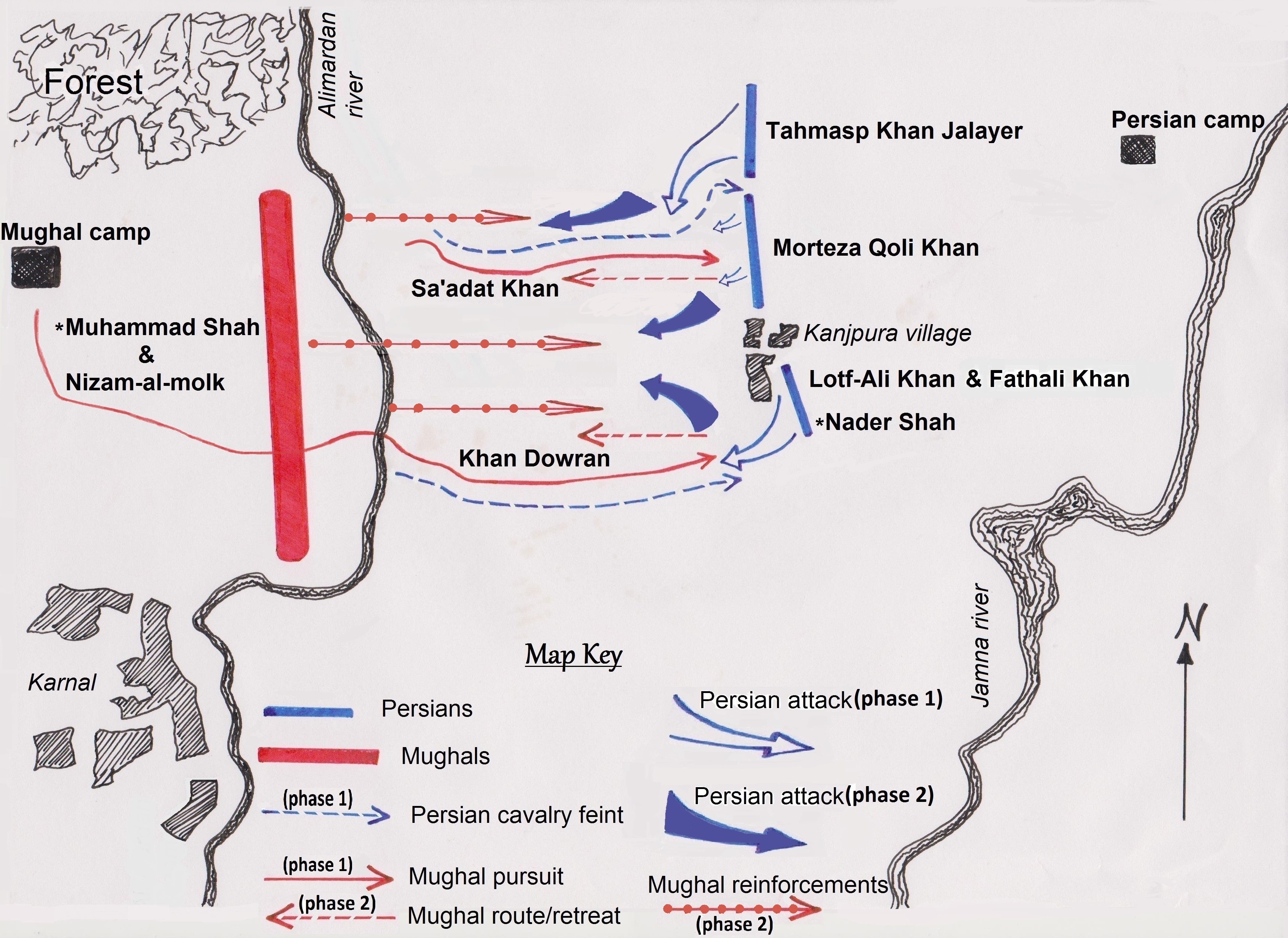 A diagram Map of the battle of Karnal

* * * The Mughals suffered far heavier casualties than the Persians. Exact figures are uncertain as accounts of that period were prone to bombast. Various contemporary commentators estimated Mughals casualties being up to 30,000 men slain with most agreeing on a figure of around 20,000.
The Persian army was estimated to have lost around 2,500 men.
Aftermath
Nader entered Delhi with Mohammed Shah as his hostage on March 11. When a rumor broke out that Nader had been assassinated, some of the Mughals attacked and killed five Persian Soldiers. Nader reacted by ordering his soldiers to plunder the city. During the course of one day (22 March) 20-30,000 civilians were killed by the Persian troops, forcing Mohammad Shah to beg for mercy, Nader Shah agreed to withdraw, but Mohammad Shah was forced to hand over the keys of his royal treasury and surrender the Peacock Throne to the Persian emperor.
The Peacock Throne thereafter served as a symbol of Persian imperial might. Among a trove of other fabulous jewels, Nader also gained the Koh-i-Noor ("Mountain of Light") and Darya-ye Noor ("Sea of Light") diamonds 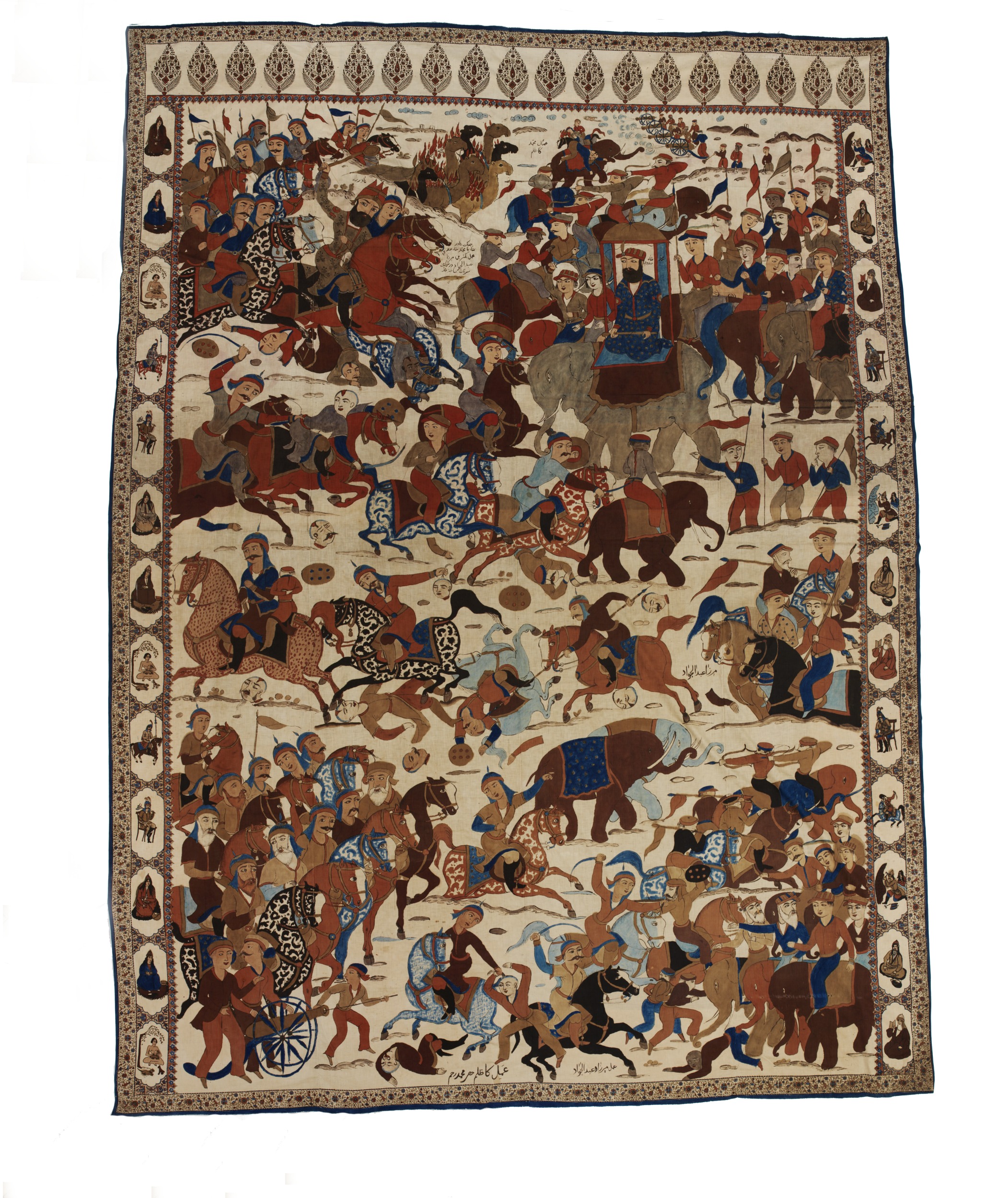 The battle of Karnal as depicted on a Persian rug (note the camels near the top edge of the rug with their backs on fire, referencing the myth of the Persian army using the tactic to scare the Mughal war elephants

* * * Persian troops left Delhi at the beginning of May 1739, also taking with them thousands of elephants, horses, and camels, all loaded with the booty they had collected. The plunder seized from India was so rich that Nader stopped taxation in Iran for a period of three years following his return.
Nadir Shah's campaign against the Mughal Empire, caused the Ottoman Sultan Mahmud I to initiate the Ottoman-Persian War (1743-1746), in which the Mughal Emperor Muhammad Shah closely cooperated with the Ottomans until his death in 1748.
References
Dupuy, R. Ernest and Trevor N. Dupuy, The Harper Encyclopedia of Military History, 4th Ed., (HarperCollinsPublishers, 1993), 711.
Floor, Wiilem(2009). The rise & fall of Nader Shah: Dutch East India Company Reports 1730-1747, Mage Publishers
Floor, Willem(1998). new facts on Nadir Shah's campaign in India in Iranian studies, p.198-219
Jaques, Tony (2006), "Karnal-1739-Nader Shah#Invasion of India", Dictionary of Battles and Sieges: A Guide to 8,500 Battles from Antiquity through the Twenty-first Century, Westport, CT: Greenwood, p. 512
Axworthy, Michael (2009). The Sword of Persia: Nader Shah, from tribal warrior to conquering tyrant,p. 254. I. B. Tauris
http://www.iranicaonline.org/articles/india-vii-relations-the-afsharid-and-zand-periods
https://www.google.ca/search?q=size+of+the+mughal+army+during+the+battle+of+karnal& ;oq=size+of+the+mughal+army+during+the+battle+of+karnal&aqs=chrome..69i57.11006j0j4&sourceid=chrome&ie=UTF-8#q=size+of+the+mughal+army+during+the+battle+of+karnal&tbm=bks
Axworthy p.8
"AN OUTLINE OF THE HISTORY OF PERSIA DURING THE LAST TWO CENTURIES (A.D. 1722-1922)". Edward G. Browne. London: Packard Humanities Institute. p. 33. Retrieved 2010-09-24.
Cust, Edward, Annals of the wars of the eighteenth century, (Gilbert & Rivington Printers:London, 1862), 228.

The collection of jewels, including the Koh-i-noor.