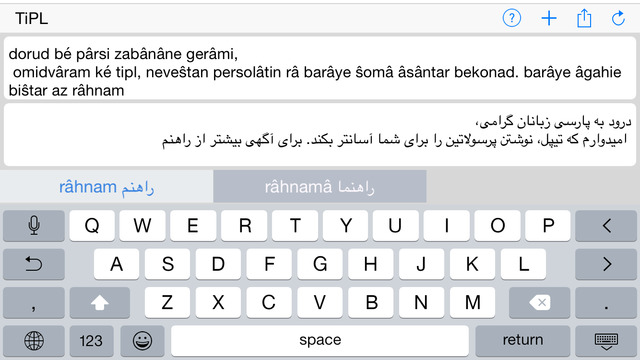 Description
TiPL is a Persian type writer, with spell checker & predictive text, it shows both, the traditional (فارسی) & Latinised Persian text.
What's New in Version 2.1
1 The 'w' key is now a replacement for â.
2 Addition of new words.
Parse Holdings Limited Web Site
http://www.tipl.co.uk /
Important: Updating the Persian text after you make changes:
When you make changes to existing text in PL, for example insert, modify or delete a word in a previous line, the contents of the PA panel needs to be updated to show the changes. To do this, press the Update button in the top right corner of the app. In this version of TiPL, there is a limit of 100 words for updates. When this is exceeded, you will get a warning message and your text will not be updated, you should save your text in another app and reduce the size of your text. You can type much longer text than 100 words, as long as you don’t need to update.
Important:
Pronunciation of most TiPL letters are, the same as or very similar to, equivalent letters of most Latin based languages.
However, TiPL has been designed, specifically, for correct spelling & pronunciation of Persian words and therefore users
should avoid applying rules of other Latin based languages and should always check the tables below, for pronunciation tips.
English speakers:
Words which include 'ar':
English speakers almost always pronounce 'ar' as a stretched 'a' or 'aar' e.g. as in car, par, part, mart.
This implicit rule should not be applied to Perso-Latin words in TiPL. 'ar' is always pronounced with a
short sharp 'a' sound, as 'a' is in man. Persian words examples: far, dar, bar, biŝtar
Words which include 'u':
bud: in Persian means 'was' and should be pronounced with a stretched
'o' sound similar to 'u' in Budapest, and not as in 'bud of a flower'
nun: in Persian is the colloquial for 'bread' and should be pronounced with
a stretched 'o' sound similar to 'oo' in noon, and not as in 'virtuous nun'
Words which include 'c':
C is always pronounced as ch in ‘chair’, whether it is before or after a vowel.
Examples: caman(چمن), câhar(چهار), cerâ(چرا), ci(چی), cune(چونه), mâc(ماچ), pic(پیچ), nuc(نوچ) and sâcmé(ساچمه)
Words which include 'th':
TiPL words will sometimes have the letter t & h following one another, as always, every letter in Perso-Latin has its own sound therefore t and h should be pronounced as 2 separate letters Example raxthâ(رخت‌ها), baxthâ(بخت‌ها).
Words which include 'oa', 'âo', 'âa' or 'âe'
TiPL words will sometimes include the above combinations, again as always, each vowel has its own sound therefore o, e, a & â should be pronounced as 2 separate letters, tasâod (تساعد) moalem (معلم) lâaqal (لااقل)
Words which include 'oe' or 'ae'
TiPL words will sometimes include the above combinations, in these specific cases, the e is not pronounced and is used to stretch the sound of the vowel before: boed (بعد) maeni (معنی)
Other words:
Dey (دی) not Day (1st month of winter)
mey (می) not may (wine)
ney (نی) not nay (cane flute)
pey (پی) not pay (foundation)
Rey (ری) not Ray (ancient region south of Tehran)
key (کی) not kay (when)
Known problems:
1 - General - Less commonly used Arabic words, are not included.
2 - Names - Not all personal & place names are included - Most Persian names can be typed correctly, provided rules are followed, however some Arabic & Other foreign names, may not be.
3 - Numbers - On most Android devices, when numbers are typed on their own, they are displayed left-to-right (as opposed to right-to-left), however mixed with text, they are displayed correctly.
4 - Adding a punctuation mark to some words may produce erroneous results, this is mainly when a word needs to be corrected: Normally, if you type khordeh TiPL will convert it to xordé but if you type khordeh? it will not. The solution is to type khordE? or khordé? or even better xordE?
---Read reviews, compare customer ratings, see screenshots, and learn more about TiPL. Download TiPL and enjoy it on your iPhone, iPad, and iPod touch.---
...

edition.presstv.ir 23/06/2012 Internet-IT
An Apple store employee refused to sell an iPad to an Iranian American customer, citing company policy that aims to comply with U.S. sanctions on trad...View Details»