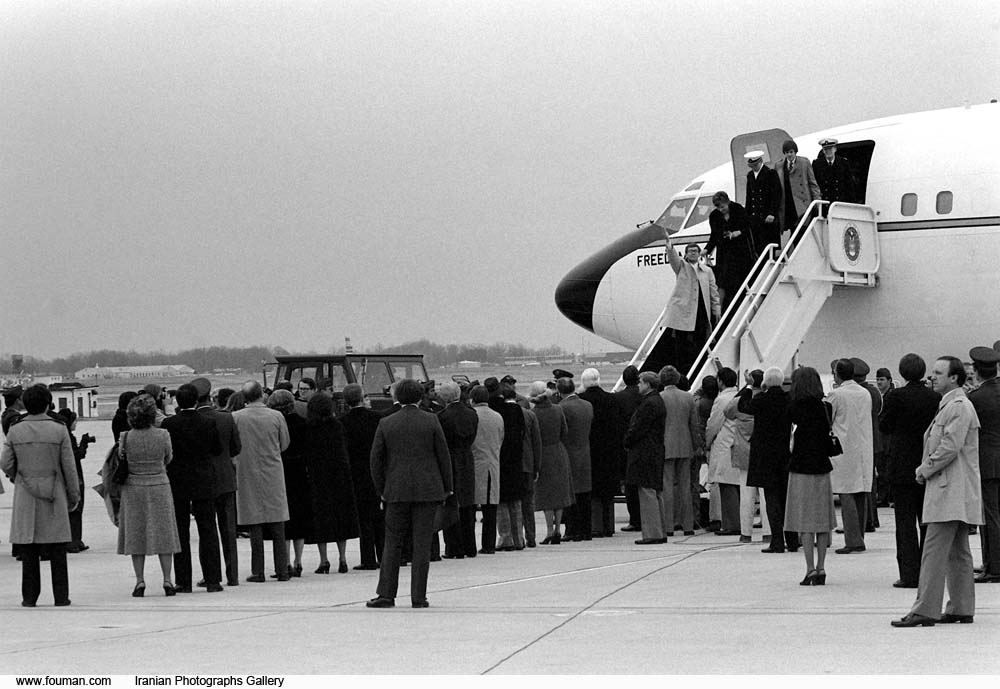 By Kery Murakami CNHI Washington Reporter Washington
For 38 surviving Americans taken hostage in Iran in 1979, more than three decades of lobbying and legal battles over compensation have finally ended.
A spending bill approved by Congress last week sets aside about $4.4 million for each of the hostages.
Last week’s budget provision gives each of surviving 38 hostages $10,000 for each day’s captivity, as well as a lump sum of $600,000 for each person who was a spouse or child of one of hostages at the time of the 444-day ordeal.
“The money can’t bring back family members, or the 444 days of their lives,” Sen. Johnny Isakson, R-Ga., who championed their cause, said during an interview. “But it would bring some closure and some justice.”
More than 60 diplomats, embassy employees and citizens visiting Iran were taken hostage Nov. 4, 1979, when militants stormed the U.S. Embassy in Tehran.
Some were released soon thereafter, but 52 endured 444 days of torture and mock executions before their release on Jan. 21, 1981, the day of President Ronald Reagan’s inauguration.

Many never truly escaped, said Tom Langford, a Virginia attorney representing the hostages.
Fifteen died premature deaths, including the suicide of a former CIA agent “from causes that flowed out of their mistreatment,” he said.
“I get calls about one of them being readmitted into a psychiatric facility because they are still having panic attacks, sometimes multiple times daily,” Langford said. “We have hostages who are reclusive and still scared of Iran because they were told when they left, ‘We’re going to come and get you.’”
The U.S. government gave the hostages token compensation in 1986. A proposal at the time would have paid each of them $100 per day — the travel allowance for government workers — but even that was cut in half during budget negotiations, according to a Congressional Research Service report on the hostages’ fight for compensation.
Over the years, $50 per day didn’t seem fair compensation for what they were still enduring, Langford said.

“Many of the hostages were severely tortured during the captivity. Families didn’t know day to day whether the Iranians would execute them,” said Al Madison, a public affairs consultant who worked with the group. “There have been divorces, PTSD.”
U.S. businesses and people other than the hostages collected $2.5 billion through the Iran-U.S. Claims Tribunal, created by the Jan. 19, 1981, agreement that freed the hostages.
Other former hostages have taken independent legal action. Former Associated Press correspondent Terry Anderson sued Iran for $341 million after being held hostage in Beirut, Lebanon, for seven years, claiming that Iran engineered his kidnapping.
But courts and even their own government thwarted the Iran hostages’ efforts to get more than half of the travel allowance for a federal employee going to a conference.
As part of the Algiers Accords, the United States waived its rights, and those of the hostages, to seek damages from Iran.
A suit filed by the hostages against Iran was thrown out by U.S. courts in 1982, citing the deal. Another filed by the hostages against the U.S. government over losing their rights to sue Iran was also tossed out.
The hostages tried again when a 1996 law allowed American victims of terrorism in foreign lands to sue a nation classified as a state sponsor of terrorism. But that case was thrown out in 2000, when President George W. Bush’s administration opposed it because of the deal with Iran.
“I think many of them felt like they were forgotten and abandoned by their own government, or made subordinate to the current policies and future economic interests of more powerful folks,” Langford said.
Last month, in marking the 36th anniversary of the hostage-taking, Isakson read a note on the Senate floor from William Daugherty, a former hostage who now lives in Savannah, Georgia. He and two other hostages living in Georgia declined a request for an interview.
“I’d like to remind the Congress that the corporations and banks have long received their compensation in whatever form it took,” he said.
Daugherty added of the aging former hostages: “Today is pretty much now-or-never for many of us.”
Several bills in Congress over the years to undo the Algiers Accords or compensate the hostages have gone nowhere. But this time, Isakson said, $3.8 billion was available from a 2014 settlement by the bank BNP Paribas for violating U.S. sanctions against Iran, the Sudan and Cuba.
New York Democratic Sens. Charles Schumer and Kirsten Gillibrand sought part of that money — $2.8 billion — for a dwindling fund for victims of the 9/11 terrorist attacks, Isakson said, paving the way for a deal for the former Iran hostages.
The spending bill set aside $1 billion for victims of terrorist attacks. That includes roughly $300 million for the Iran hostages, Madison said.
Isakson noted the settlement money otherwise would have gone into the U.S. Treasury.
“I can’t think of a better use of the funds,” he said. “This is part of the American heritage of taking care of our own.”

Kery Murakami is the Washington, D.C., reporter for CNHI’s newspapers and websites.
---For 38 surviving Americans taken hostage in Iran in 1979, more than three decades of lobbying and legal battles over compensation have finally ended. Iran Hostage Crisis ---
... consortiumnews.com 11/04/2014 History
Exclusive: The Senate wants to block Iran’s new UN ambassador because he was linked to the Iran hostage crisis 35 years ago, but that standard would s...View Details»