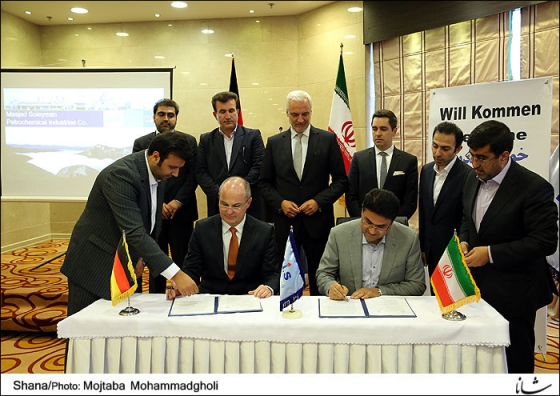 TEHRAN, May 28 (Shana) – Germany's Abels Decker Kuhfuß Lenzen (ADKL) won a contract for developing a major petrochemical project in Iran's southwestern city of Masjed Soleyman.
The German company struck the deal, worth €2b, on Thursday with Masjed Soleyman Petrochemical Industries Company (MSPIC). The contract's value can rise as high as €10 billion in the future.
The money will be invested in the first phase of a petrochemical project in Masjed Soleyman, said ADKL’s Bernd Lenzen after signing the deal.
Shana/Photo: Signing of the deal between ADKL and MSPIC

* * *
Ever since the landmark deal Iran struck with world powers in Vienna over its nuclear program and the removal of US-led sanctions on its key economic sectors, Tehran is trying to position itself as a safe investment destination and dozens of high-profile delegations from all continents have made the trek to the country for securing deals in a race to win a bigger market share in a ban-free Iran.
The deal with ADKL was signed during the visit to Iran by Garrelt Duin, the state minister for economic affairs and energy of Germany’s Nordrhein-Westfalen State.
Accordingly, the ADKL will assist Masjed Soleyman Petrochemical Industries Company (MSPIC) in providing funds, transferring the technology and implementing contracts for the project within the framework of engineering, procurement, construction and finance (EPCF).
MSPIC is keen on working with European enterprises, told the reporters the company's Managing Director Yousef Davoodi after signing the deal.
The project, to be developed in northern parts of Khouzestan province, will produce urea and ammonia as its key products. The daily production target of each in the first phase will be 3,250 tons of urea, 2,050 tons of ammonia.
---Germany's Abels Decker Kuhfuß Lenzen (ADKL) won a contract for developing a major petrochemical project in Iran's southwestern city of Masjed Soleyman. ---
...