Rouhani Struggles to Lift Iranians' Prosperity at His Own Risk - Bloomberg

Rouhani Struggles to Lift Iranians' Prosperity at His Own Risk - Bloomberg...
bloomberg.com 11/08/2016 Politics

Unease is growing that an end to sanctions has yet to lift living standards broadly and improve the economy
Ladane Nasseri
August 10, 2016 — 1:31 AM IRDT
Russia's President Vladimir Putin (R) meets with Iran's President Hassan Rouhani on the sidelines of the United Nations General Assembly in New York, September 28, 2015.

* * * The villas along the Caspian Sea at Mahmoudabad in northern Iran fill at weekends as well-off families drive up from Tehran. The lawns and flower beds that await them are tended by men like Morteza, who works 13-hour days starting at dawn for $510 a month.
A gardener to the privileged, he says his income barely covers living expenses for his family of four, and explains why he supported Hassan Rouhani for the presidency in 2013. Come May’s election, he’ll be switching his vote.
“Rouhani didn’t stand by the promises he made,” said Morteza, 35, who asked for his family name to be withheld. “He said he would create jobs, invest in the provinces. But we’re not feeling any change since the nuclear deal. I voted for him the first time around but won’t in the next elections.”
Frustration is rising in Iran as the jobs and better pay the government said would swiftly follow implementation of the July 2015 nuclear accord are yet to arrive. That’s a problem for Rouhani as he prepares to contest for a second term, and a concern for the international community that sees him as the best hope for an Iran that’s open for business and collaborative in foreign policy.
Bad News
A poll published in July captured the discontent. Seventy-four percent of those surveyed by Toronto-based IranPoll.com for the University of Maryland’s Center for International and Security Studies said their living conditions hadn’t improved. Only 42 percent judged the economy was getting better, down from 57 percent last year.
Nearly three-quarters said Rouhani had been “somewhat or very unsuccessful” in cutting unemployment. While 61 percent held a “very favorable” view of the president after the deal was signed, it’s now 38 percent. Still, a strong majority remain broadly supportive, with less than 20 percent having an “unfavorable” opinion of Rouhani. IranPoll.com interviewed 1,007 Iranians by phone. The survey had a margin of error of 3.2 percent. 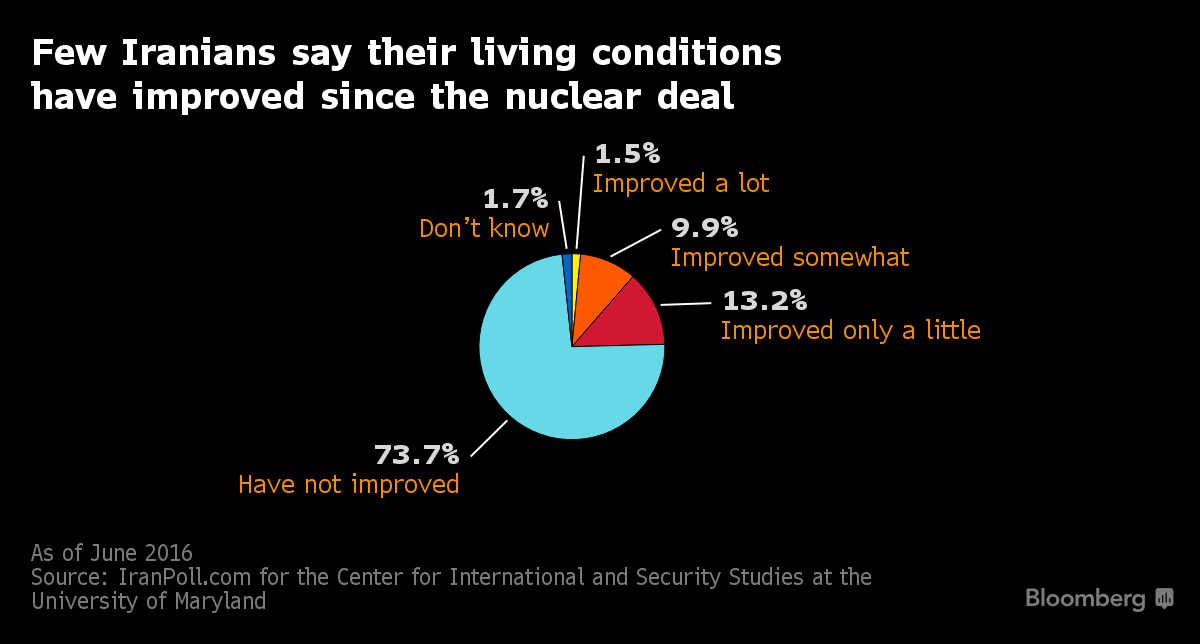 The findings show Rouhani may be vulnerable in the election should his conservative opponents field a popular candidate. A narrow victory for the president also risks helping conservatives block the kind of economic and social reforms he has championed.
In the same poll, Revolutionary Guard Corps. commander Qassem Soleimani, instrumental in Iran’s military involvement in Syria and Iraq, received generally favorable ratings above 70 percent. And while official campaigning won’t start for months, former President Mahmoud Ahmadinejad has also used recent speeches to criticize the government. His supporters are spreading that message online.
“The push back from hardliners is very strong and will likely increase,” said Aniseh Bassiri Tabrizi, a research fellow in Middle East Security at the Royal United Services Institute in London. If Rouhani can’t show “concrete benefits” from his diplomatic success, he may “have difficulty getting the support he needs to be re-elected,” she said. 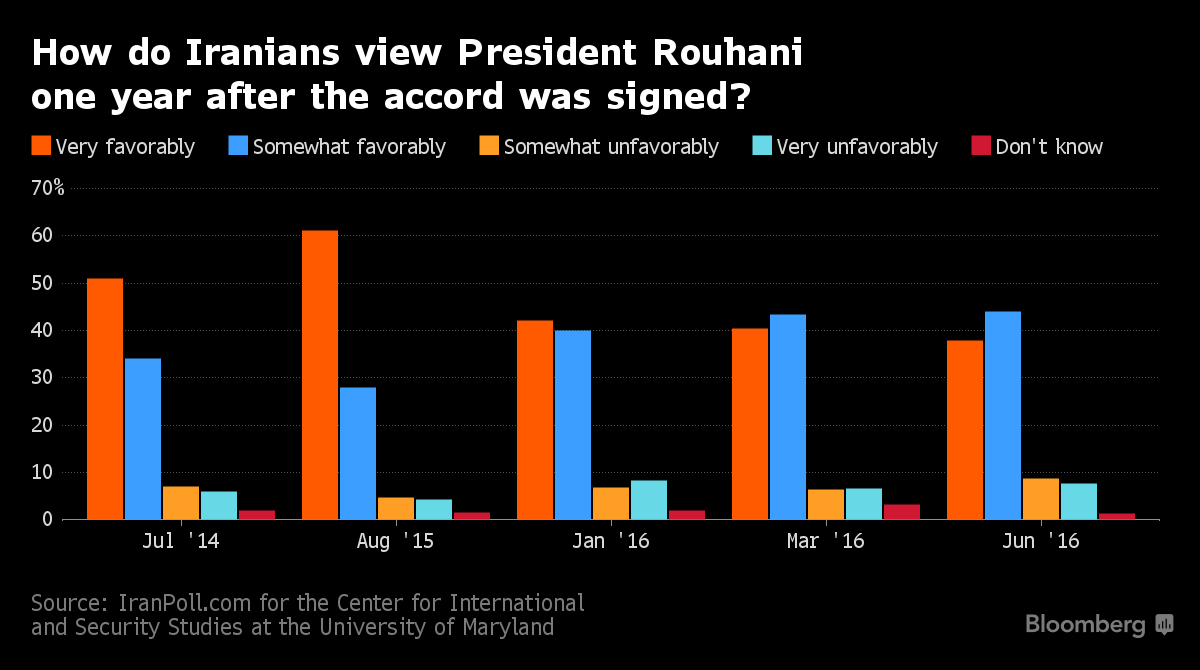 Yet Suzanne Maloney, an Iran scholar at the Brookings Institution in Washington, says Rouhani remains well placed to win given the probable unwillingness among top leaders to turn at a time of transition to someone untested.
“The powers that be would much rather have a known quantity in this key office at this moment,” she said, especially as “there’s some potential” for change in the nation’s top job, held by 77-year-old Ayatollah Ali Khamenei. Rumors of the supreme leader’s poor health have circulated for a decade. He had prostate surgery in 2014.
Buying Time
For now, the government is attempting to buy time. Expectations -- initially set high to rally support behind the deal -- are being lowered a notch or two, said Ellie Geranmayeh, Middle East and North Africa policy fellow at the European Council on Foreign Relations in London.
“They need to say, ‘we made advances, we created a more positive environment for the economy but there’s a lot more work to do and it’s likely to be slower than first expected,’” she said.
Rouhani’s diplomatic offensive to lift sanctions aimed to drag Iran out of crisis and spread opportunities beyond an affluent few, who raced ahead even amid ever-deeper economic isolation.
Speaking on Wednesday in a cabinet meeting, Rouhani said his government's policies had been reliant on vision and "hope."
The nuclear deal's aim was "to defend people's rights" and "to open the path of economic activity," he said according to the official Islamic Republic News Agency. "To reach our long term plans we must strengthen our hope in the future." 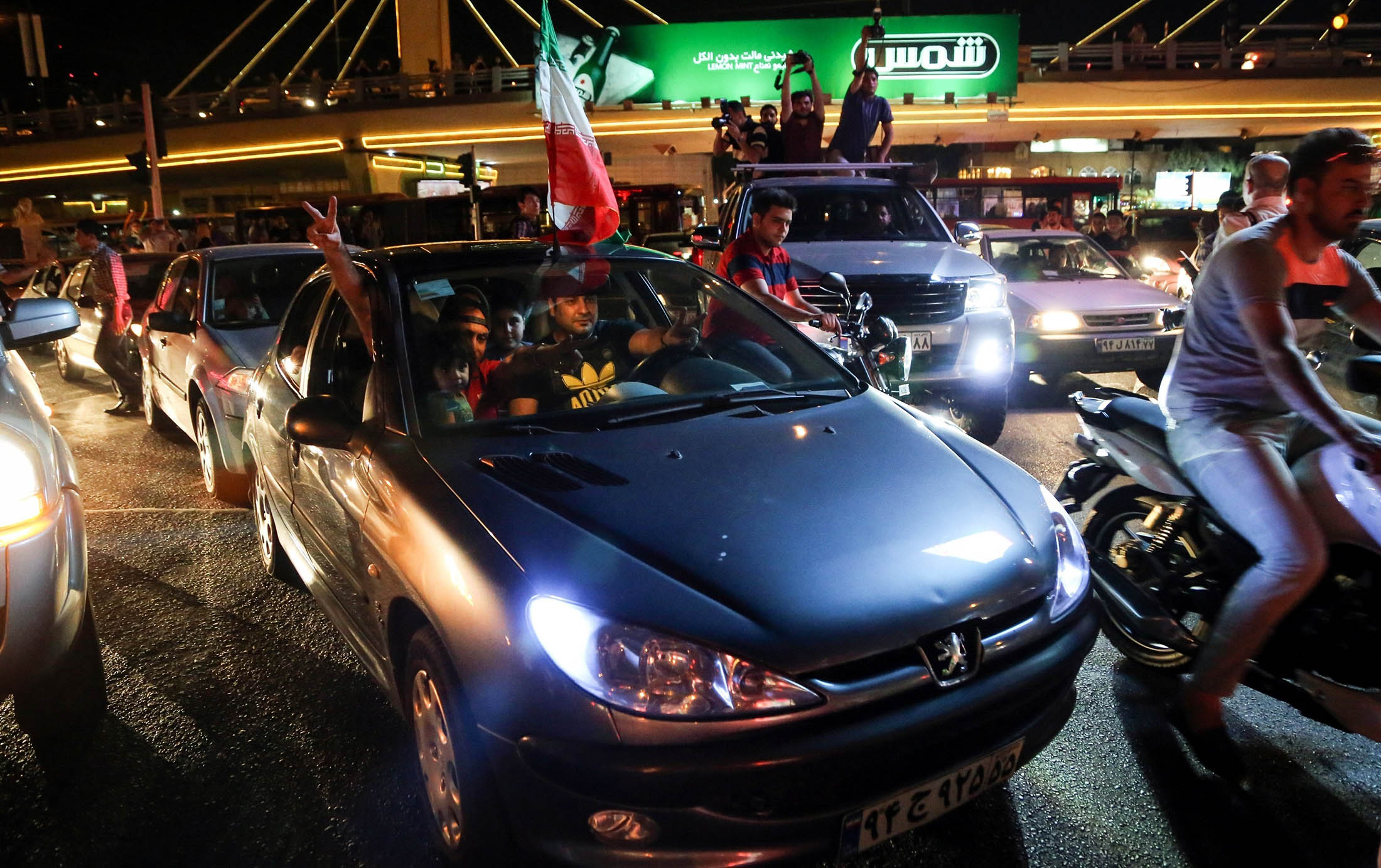 * * * Since curbs were lifted in January, oil exports have risen almost to pre-sanctions levels. Inflation continued its fall from a peak of 40 percent when Rouhani took office, and is now in single digits. The president, who won 51 percent of the vote in 2013, has backed a freer media, more relaxed dress codes for women and greater female involvement in public office and business.
U.S. Ties
But crude’s slumping value means oil revenue is expected to be less than half of what it was in 2011. At the same time, U.S. sanctions over missile development and Iran’s links to designated terrorist groups remain and are deterring global banks. A quarter of the youth population is out of work. Foreign-investment pledges are short of target. And with both candidates in November’s U.S. presidential election less tied to the deal than Barack Obama, relations with Washington may have peaked.
Rouhani must demonstrate the benefits of an economic resurgence will be distributed beyond the elite, said Maloney, author of “Iran’s Political Economy Since the Revolution.”
Those waiting to be convinced include retired government employee Ali-Akbar Kermani, who was in Tehran’s Ferdowsi Square with a stack of dollar bills he hoped to sell for a small profit. “One of my sons just finished high school and the other one is at university,” he said. “I keep telling them to become independent and not count on me. But there are no jobs.”
Khamenei Pressure
Shopping for groceries in the capital, Behjat Mirzai, 47, pointed out that Rouhani “inherited a devastated economy” in need of “miracles.”
Khamenei, who supported the nuclear negotiations but sought to balance the interests of hardliners who didn’t, raised the pressure on Rouhani, recently asking: “Are we witnessing any tangible impact on people’s lives after six months?”
He has also lashed out at top earners, after leaked pay slips showed some managers at state-run financial institutions earning tens of thousands of dollars a month while the average urban family, according to official data, took home $650 -- and spent $632 of it.
On the Caspian coast, Morteza considers himself lucky on one count. “Most of the men in my family and among my friends don’t have work,” he said. In Mahmoudabad, many spend their days “just hanging out at the tea-house smoking shisha.”
—With assistance from Hashem Kalantari.
---Unease is growing that an end to sanctions has yet to lift living standards broadly and improve the economy ---
...