How We Know ISIS Was Made In The USA 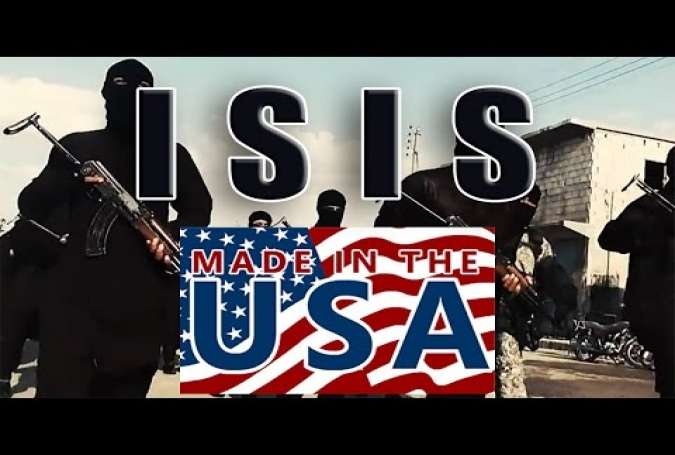 Islam Times - Judicial Watch proved it. Under a Freedom of Information Act request, Judicial Watch was able to obtain a (heavily redacted) copy of the Defense Intelligence Agency (DIA) directive that initiated the creation of ISIS in 2012.

“THE WEST, GULF COUNTRIES, AND TURKEY [WHO] SUPPORT THE [SYRIAN] OPPOSITION . . . [SUPPORT] ESTABLISHING A DECLARED OR UNDECLARED SALAFIST PRINCIPALITY IN EASTERN SYRIA . . . IN ORDER TO ISOLATE THE SYRIAN REGIME . . .”.

Not even Judicial Watch seems to have appreciated the significance of this document, where its press release focused on the Benghazi attack. Recent releases of Hillary’s emails, moreover, confirm that taking out Assad has nothing to do with his alleged abuse of the Syrian people but because it will help Israel.

Just in case it has slipped anyone’s mind, Hillary was Secretary of State from 2009 to 2013. Barack was inaugurated in 2008 and steps down in 2016. It happened on their watch. It could not have happened without their approval. They really did create ISIS!

The chemical attacks on Syrian citizens on 21 August 2013 was meant to justify lobbing cruise missiles into Syria. Obama was ready, but Americans were not. And when the ploy was debunked by a 50-page dossier the Russians provided to the UN, they resorted to “Plan B”, which was the creation of ISIS by the DIA.

The chemical weapons are widely believed to have been provided to the “rebels” by Prince Bandar of Saudi Arabia, to whom the Bush family refers as “Bandar Bush”. But recent releases of Hillary’s emails suggest that she was directing the transfer of weapons from Libya to Syria and chemical weapons may have been among them.

The Benghazi attack appears to have been initiated because Ambassador Christ Stevens was concerned that some of the weapons being sent to Syria could be used against the civilian population. The Obama administration has stonewalled inquiries as to whether Benghazi had anything to do with transferring weapons to the rebels. That means “Yes!”

The signs have been there right along the way, but the media has not been reporting them. Here are some of the facts reported in a recent study about ISIS:

* On 23 February 2015, *FARS* reported that the (much maligned) Iraqi Army had downed 2 UK cargo planes carrying weapons for ISIS, which was among the first signs that things were not as the world was being told by Western—and especially US—news sources.

* On 1 March 2015, *FARS* reported that Iraqi popular forces are known as “Al-Hashad Al-Shabi” shot down a US helicopter carrying weapons for ISIL in Al-Anbar province of which they had photographs.

* On 10 April 2015, *Press TV* reported that, in response to a request by Syrian that ISIL be named a terrorist organization, the US, Britain, France, and Jordan refused, which was rather baffling on its face.

* On 19 May 2015, Brad Hoof of levantreport.com, “2012 Defense intelligence Agency document: West will facilitate rise of Islamic State ‘in order to isolate the Syrian regime”, based upon the release of a selection of formerly classified documents obtained by Judicial Watch from the US Department of Defense and Department of State.

* On 22 June 2015, ex-CIA contractor, Steven Kelley, explained the US “created ISIL for sake of Israel” and to have a “never-ending war” in the Middle East, which would make the countries there “unable to stand up to Israel” and to provide “the constant flow of orders for weapons from the military-industrial complex at home, which is feeding a lot of money to the senators pushing for these wars”.

There’s more–a lot more, including photographs of Sen. John McCain with Abu Bakr al-Baghdadi. You can find dozens of them on the internet. In Washington, ISIS is widely known as “John McCain’s army”. So what’s wrong with a candidate for president making the point that his opponent and her most prominent support actually created ISIS? Trump is right.