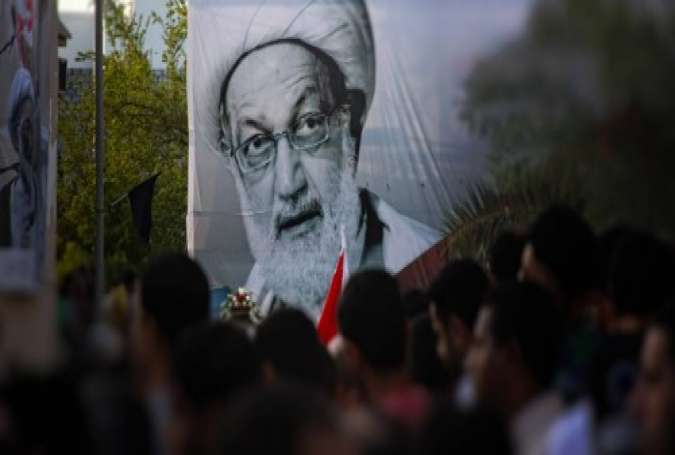 Islam Times - The supreme Shiite religious leader in Bahrain Ayatollah Sheikh Isa Qassim did not attend his first court hearing on July 27, 2016. Sheikh Isa did not even assign a lawyer and so did the other defendants in the same case. A day before, Sheikh Isa refused to receive a notice to stand before the court. His family also refused to attach the notice to the front door of their house.

* * *
The opposing Shiite cleric, whose nationality was revoked on June 20, 2016, by a royal decree, is being sued by the Bahraini regime for performing his religious duty in receiving the Khums (alms) money; a Shiite religious duty. If the aim behind revoking the Sheikh's citizenship is to exile him, the aim of his trial over laundering money, then, is to confiscate the "religious rights" (money) of Shiites.

Sheikh Isa's first hearing was held in the presence of the plaintiffs and judges only. The courtroom was cleared for them to claim whatever they wanted. The defendant; however, did not even care for the trial, or the court. Since his citizenship was revoked, Sheikh Qassim did not stop issuing opposing statements in his name along with other senior Bahraini Shia clerics. He even couldn't care less for the decision that revoked his citizenship.

Is the Sheikh doing so to challenge the regime, stir up the situation or provoke further escalation? Of course not. These reckless and irresponsible actions are the regime's traits and not the Sheikh's. Sheikh Isa prevented the eruption of a civil war after the King announce the "National Safety" period in 2011, along with the consequences that followed affecting the Shiites in the country; from attacks on Shiite place of worship, demolition of Shiite mosques, murder, torture, imprisonment, to insulting Shia beliefs.

Then, why is the Sheikh doing so?

For if the Sheikh addresses the decision, then it means that he recognizes it. No political authority has the right to revoke the citizenship of an indigenous citizen over peaceful opposition.

If Sheikh Isa accepted to appear before the judge to prove his innocence, this means he is giving value for these charges. Raising such charges against a person like Sheikh Isa Qassim is considered an ethical and social crime. Such decisions are made by the authorities, yet any of the corrupt officials who steal the public money are never held accountable, and even get promoted to higher posts.

Appearing before a court the is ruled by a political decision and judges appointed by the king, who deems his people the first enemy, has turned the country into a big open prison and used his authority as a tool to punish his people, is a recognition of the legitimacy of these courts and those working in them as well as the sentences issued by them.

Yes, Sheikh Isa Qassim wants to tell the Bahraini regime: I don't recognize the actions taken against me and against the people as well. I will act as if your measures do not exist. I do so out of respect of myself and my country, stressing on the need for reform and change. I will carry on this harsh journey no matter what happens. This country shall remain steadfast and proud by its people and the regime shall fall into the abyss.

Anger as Shi'ite cleric among 47 in mass Saudi terrorism execution ...