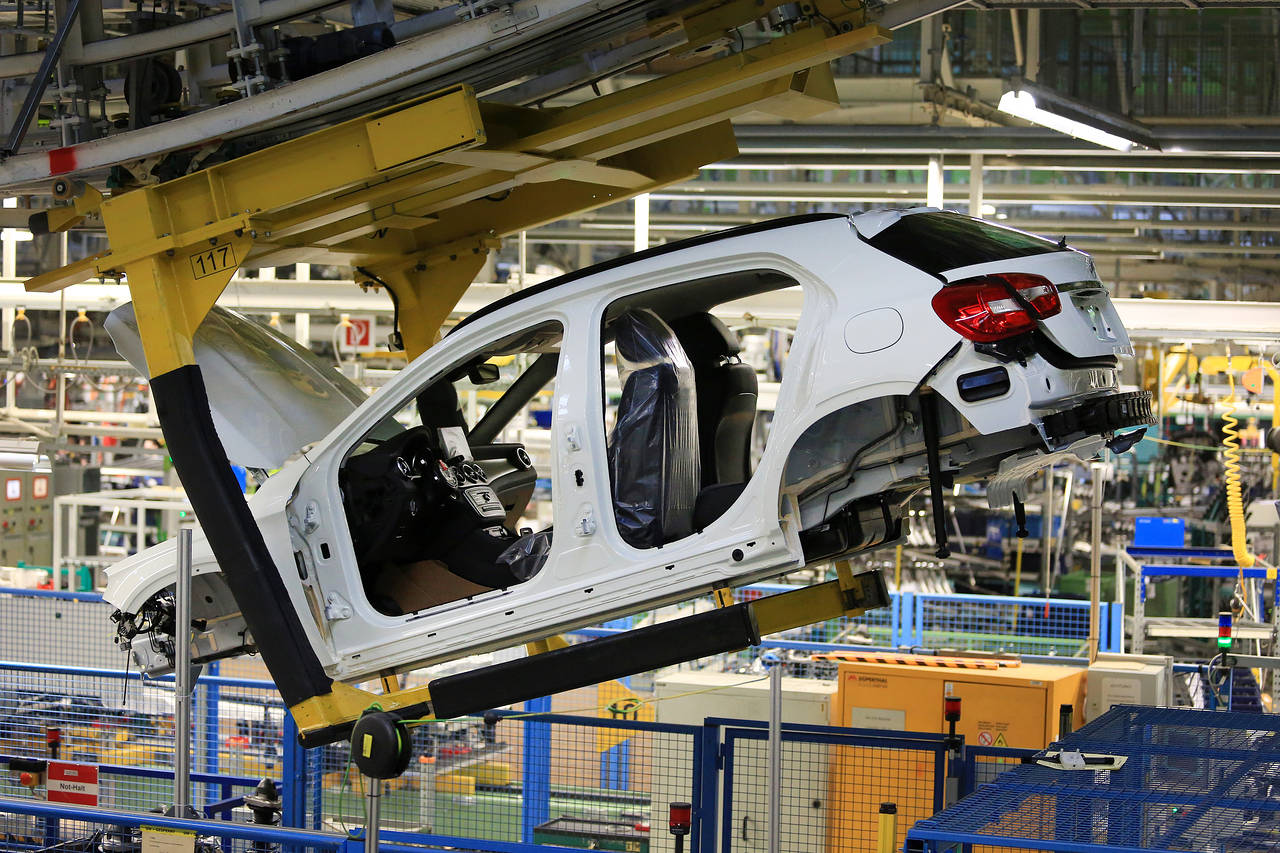 Seats and a dashboard sit inside the body shell of a Mercedes-Benz GLA compact SUV automobile on the assembly line of a Mercedes-Benz factory in Germany. The German automaker announced plans in January for a joint venture in Iran to build Mercedes-Benz trucks after trade restrictions tied to the country's nuclear program were lifted. Photo: Krisztian Bocsi/Bloomberg News

* * * By Christopher Alessi
Aug. 31, 2016 8:21 a.m. ET
FRANKFURT—German companies hoped the opening of Iran’s economy following the lifting of international sanctions in January would let them rekindle longstanding commercial ties and quickly strike gold.
Despite a jump in exports, the results have left Germans disappointed.
Soon after world powers last summer signed a deal to lift economic sanctions on the Islamic Republic in exchange for curbs on its nuclear program, German business delegations started visiting Iran. Even before sanctions were officially lifted in January, Germans sought local distributors and prepared to resume trade.
Other European delegations followed but expectations were particularly high that German-Iranian business ties would flourish. Some German firms never fully retreated from Iran, even when sanctions were toughest.
German multinationals including engineering conglomerate Siemens AG have announced plans for large industrial projects in Iran.
In the first six months of this year, German exports to Iran climbed 15%, to €1.13 billion ($1.26 billion), according to the German Federal Statistical Office. Germany’s worldwide exports during the period totaled €603.2 billion.
But many German business and government leaders had predicted the lifting of sanctions on Iran would trigger a bonanza for their industrial firms, which want to sell Iran equipment to help rebuild its aging infrastructure.
Disappointed Germans are now blaming the shortfall primarily on remaining U.S. prohibitions on some transactions with Iran.
“The development lags behind our expectations by far, because of the [U.S.] sanctions still in place,” said Gregor Wolf, director of European and international affairs at the Federation of German Wholesale Foreign Trade and Services. “Companies are afraid of U.S. retaliation,” he added.
Many Western financial institutions are hesitant about engaging with the Iranian market for fear of facing U.S. fines, Mr. Wolf said. That reticence complicates payments.
“Even though there is a positive influence from all the events since last year, the international money transfer [system] is not officially open yet,” said Ashkan Pirayesh, an Iranian-German with German firm Richter Lighting Technologies GmbH, who participated in a German business delegation to Iran last September. Mr. Pirayesh said Richter is in the process of building a local office in Tehran but was not yet exporting to Iran.
Despite the removal of many nuclear-related sanctions imposed by U.S., the European Union and United Nations, other U.S. sanctions on Iran persist. The U.S. still designates Iran a State Sponsor of Terrorism, which blocks loans to the country by international banks with ties to the U.S., and consequently Iran’s access to global markets.
“Monetary transactions with Iran have been severely penalized by the U.S.,” said Ludovic Subran, chief economist at Euler Hermes Group, a German trade-insurance provider backed by Allianz SE. “Everyone is waiting for the Americans to take the first step.”
Nevertheless, the payment situation has eased since last year, experts say. At that time, German firms active in Iran had to route payments through indirect channels such as the United Arab Emirates or Turkey.
Now German companies have a few more options, said Amir Alizadeh, deputy managing director at the Tehran-based German-Iranian Chamber of Commerce.
Hamburg-based European-Iranian Trade Bank AG, which until January had been blocked by sanctions, is back in business and a conduit for German firms to receive payments, Mr. Alizadeh said. Some smaller banks with limited ties to the U.S. have also begun working with Iran, he said. The trade bank could not be reached for comment.
The German government in June settled a longstanding debt dispute with the Iranian government, handled through Euler Hermes, which reopened export-credit guarantees for companies that want to trade with Iran. This could pave the way for more German firms to establish business ties in coming months, Mr. Alizadeh said.
Some deals have taken time to conclude. Siemens in May signed agreements with Iran to modernize its energy infrastructure, including providing Iran with the technological know-how to build some gas turbines. Siemens also aims to develop Iran’s wind-power capabilities and its railway sector.
A spokesperson for Siemens said the company’s portfolio in Iran was “precisely aligned” to help the country achieve plans to increase steel and cement production, export cars and become a gas-and-electricity hub.
Siemens declined to elaborate on how it would obtain payments from Iran.
Beyond the challenges of payment, obstacles remain for German and other western firms pursuing opportunities in Iran, according to experts. These include currency instability, a complicated bureaucracy, a shaky legal system and ongoing political risk in the country and throughout the wider Middle East.
“Nevertheless, Iran is going to be an interesting market in the long term, especially for German exporters,” Euler Hermes’s Mr. Subran said. “In the best case, German exporters could double their exports in the coming years.”
--- ---
...