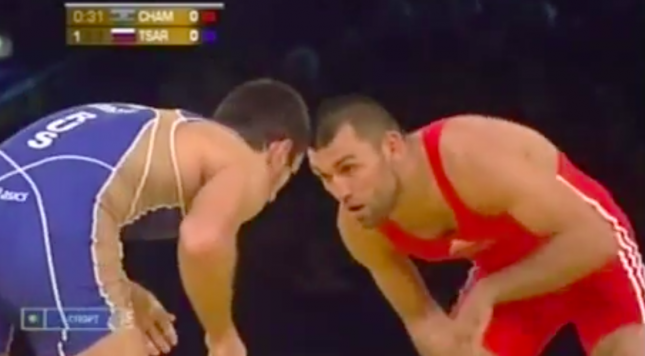 * * * Chamsulvaraev, 32, was from Dagestan, Russia, a Muslim region of the country on the Caspian Sea near the borders of Georgia and Azerbaijan. The wrestler joined ISIS recently and his main job was to recruit young girls to be suicide bombers.
The 32-year-old is suspected of recruiting Diana Ramazanova, a pregnant teenager who last year blew herself up in Istanbul. Ramazanova was one of many girls he recruited. Once he joined ISIS, he reportedly focused on recruiting girls from the Caucasus region of the former USSR near where he is from.
Earlier this month, Chamsulvaraev was killed when a car was struck by a U.S. drone near Mosul, a city in Northern Iraq, according to reports out of Russia. Previously, Chamsulvaraev had been in Saudi Arabia and Syria.
Before joining ISIS, Chamsulvaraev was a world renown wrestler. After switching his citizenship to Azerbaijan in the mid-2000s, Chamsulvaraev won the bronze at the European Championships in 2007 and 2008 before taking part in the 2008 Beijing Summer Olympics.
In 2009, Chamsulvaraev finished second at the wrestling World Championship before becoming the European Champion in 2010.
Chamsulvaraev’s mother in law, Karina, played a role in radicalizing him according to various reports. She detonated grenades in front of an Istanbul tourism police station in January of 2015. She is reportedly the widow of an ISIS fighter as well.
---Chamsulvara Chamsulvaraev won the European wrestling championship in 2010 before joining ISIS. This month, he was killed in a U.S. drone strike in Iraq. ---...

valuewalk.com 18/11/2015 Politics
By Brinda Banerjee on November 17, 2015 4:30 pm in Politics, Russia Russia and Iran have suggested that a phase of greater cooperation, trust and par...View Details»