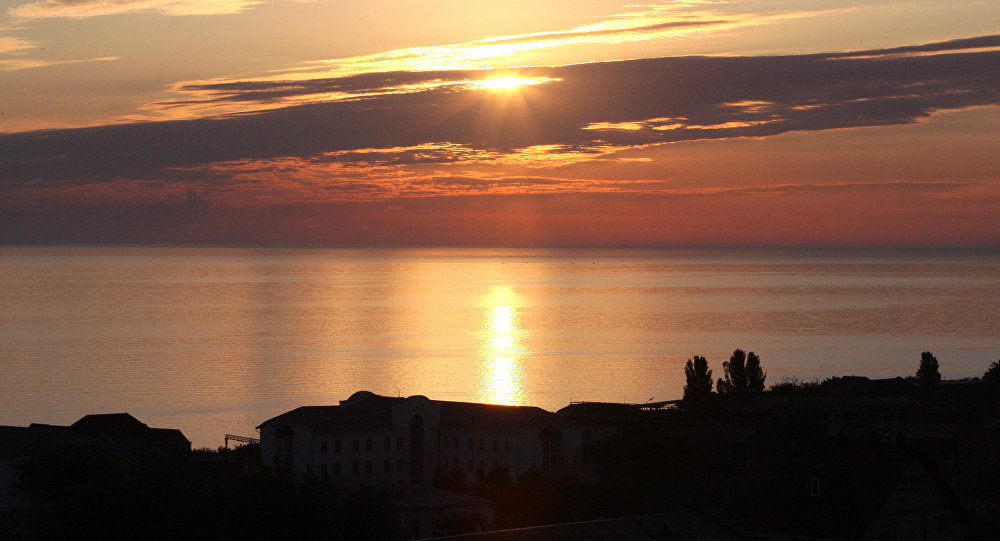 Tehran's 'Big Lake' Claim Muddies the Waters in Caspian Sea Dispute
© Sputnik/ Said Tsarnaev World 21:57 26.10.2016(updated 22:57 26.10.2016) Get short URL 31426120 The unique features of the Caspian Sea has dogged decades of negotiations on the status of the body of water, political scientist Vladimir Sazhin told Sputnik Persian.
This week the 47th Session of the Special Working Group (SWG) on the development of the Convention on the Legal Status of the Caspian Sea met in Tehran, where deputy foreign ministers of the Caspian states discussed a possible agreement on the Caspian's legal status.
Since 1991, the five Caspian Sea countries have made agreements on a range of areas including the environment, the protection of marine resources, security, co-operation in the case of emergency situations and military activities in the lake. In practice, they have come to agreement regarding the division of the water surface into zones of exploitation. According to this agreement, the five Caspian countries have the right to exploit marine resources up to 25 miles from their coast. This includes 15 nautical miles which constitutes national waters, plus another ten nautical miles in which each state has the exclusive right to fishing. The rest of the water is considered international. Political analyst Vladimir Sazhin told Sputnik Persian that while the Caspian Sea countries have made a lot of progress on the issue, a final Convention is still far from being agreed. "I will say straightaway that for the moment the prospect is extremely remote. At the moment the legal framework for the Caspian Sea is based on two agreements signed by Iran and the Soviet Union in 1921 and 1940," Sazhin said.
"Azerbaijan, Kazakhstan and Turkmenistan, three new littoral states established after the collapse of the Soviet Union, do not recognize these agreements and are holding discussions about the future status of the sea."
"Of course, this is justified because after all there are now five, not two independent Caspian states, each of which has an equal right to this sea-lake, on the basis of their geographical location," Sazhin explained. The issue of whether the Caspian Sea, the Earth's largest enclosed body of water, is actually a lake or a sea is at the core of many of the disagreements, since a lake comes under the jurisdiction of the states along its shore, and not international law. Iran is convinced that the Caspian is a lake, and its waters and resources should be divided equally five ways. This would give Tehran control over 20 percent of the water and sea bed. Bilateral treaties signed between Iran and the USSR also recognized the sea as a lake, giving the two countries the right to divide its resources equally between them. However, Iran's four neighbors in the Caspian now say that, as reflected by its name, the body of water is really a sea. Therefore, they argue, the water and sea bed should be divided according to a modified median line.
A median line runs at an equal distance from the states' acknowledged coastlines. A modified median line enables some flexibility in cases where sub-sea resources have already been developed, or a field found by one country spills over the median line.
Russia and Kazakhstan were the first to sign an agreement delineating the sea according to this principle in 1998, and signed a trilateral agreement with Azerbaijan in 2003. In 2004 Kazakhstan and Turkmenistan also signed an agrement to define their territorial waters, which came into effect last year. However, the proposal is rejected by Tehran since its Exclusive Economic Zone would constitute only 13 percent of the sea according to this principle, roughly the same zone it controlled during the Soviet Union, and continues to exploit today. Azerbaijan to the west of Iran and Turkmenistan to the east reject in turn Tehran's idea, since it would deprive them of some territorial water and resources. Other issues to be resolved around the Caspian Sea include navigation, underwater communications and transit, including oil pipelines. Despite the stumbling blocks, all parties are actively engaged in discussions to resolve these issues. Five sessions of the SWG have been held this year alone, one in each country's capital city.

---The unique features of the Caspian Sea has dogged decades of negotiations on the status of the body of water, political scientist Vladimir Sazhin told Sputnik Persian. ---
...