U.S.renews '79 State of Emergency with Iran 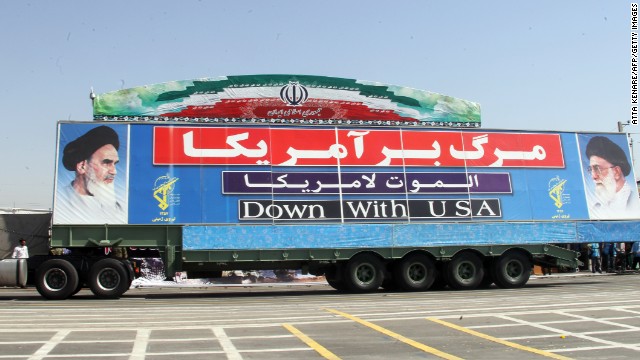 A military truck with a banner against the USA during an annual military parade which marks Iran's eight-year war with Iraq, 1980-88, in the capital Tehran, on September 22, 2013.
The White House on Tuesday renewed its State of Emergency with Iran -- declared in 1979 and renewed periodically since then.
"This is a routine renewal of the policy and is not new or connected in any way to the Geneva discussion," an Obama administration official said, referring to the recent nuclear talks between world powers and Iran in Switzerland. "The previous order did not expire — we must renew it to prevent it from expiring."
The United States ended diplomatic ties with Iran on April 7, 1980. This occurred after militants seized control of the U.S. Embassy in Tehran on November 4, 1979 and took dozens of embassy workers hostage.
There have been tensions for years between the United States and Iran over Tehran's nuclear aspirations.
The United States and allies have long believed Iran wants to build nuclear weapons. Iran, however, says it only wants to use nuclear power for peaceful purposes.
Progress toward reaching an agreement over the nuclear program has been made in recent months after the election of President Hassan Rouhani, seen as more moderate and pragmatic than his predecessor.
https://www.whitehouse.gov/the-press-office/2016/03/09/notice-and-letter-continuation-national-emergency-respect-iran
Notice -- Continuation of the National Emergency with Respect to Iran
NOTICE
- - - - - - -
CONTINUATION OF THE NATIONAL EMERGENCY WITH RESPECT TO IRAN
On March 15, 1995, by Executive Order 12957, the President declared a national emergency with respect to Iran, pursuant to the International Emergency Economic Powers Act (50 U.S.C. 1701-1706), to deal with the unusual and extraordinary threat to the national security, foreign policy, and economy of the United States constituted by the actions and policies of the Government of Iran. On May 6, 1995, the President issued Executive Order 12959, imposing comprehensive sanctions on Iran to further respond to this threat. On August 19, 1997, the President issued Executive Order 13059, consolidating and clarifying the previous orders. I took additional steps pursuant to this national emergency in Executive Order 13553 of September 28, 2010, Executive Order 13574 of May 23, 2011, Executive Order 13590 of November 20, 2011, Executive Order 13599 of February 5, 2012, Executive Order 13606 of April 22, 2012, Executive Order 13608 of May 1, 2012, Executive Order 13622 of July 30, 2012, Executive Order 13628 of October 9, 2012, and Executive Order 13645 of June 3, 2013.
On July 14, 2015, the P5+1 (China, France, Germany, Russia, the United Kingdom, and the United States), the European Union, and Iran reached a Joint Comprehensive Plan of Action (JCPOA) to ensure that Iran's nuclear program is and will remain exclusively peaceful. January 16, 2016, marked Implementation Day under the JCPOA, when the International Atomic Energy Agency issued a report verifying that Iran had completed key nuclear-related steps as specified in the JCPOA, and the Secretary of State confirmed the report's findings. As a result, the United States lifted nuclear-related sanctions on Iran consistent with its commitments under the JCPOA, including the termination of a number of Executive Orders that were issued pursuant to this national emergency. Though the lifting of nuclear-related sanctions constitutes a significant change in our sanctions posture, non-nuclear related sanctions remain in place.
Despite the historic deal to ensure the exclusively peaceful nature of Iran's nuclear program, certain actions and policies of the Government of Iran continue to pose an unusual and extraordinary threat to the national security, foreign policy, and economy of the United States. For this reason, the national emergency declared on March 15, 1995, must continue in effect beyond March 15, 2016. Therefore, in accordance with section 202(d) of the National Emergencies Act (50 U.S.C. 1622(d)), I am continuing for 1 year the national emergency with respect to Iran declared in Executive Order 12957. The emergency declared in Executive Order 12957 constitutes an emergency separate from that declared on November 14, 1979, by Executive Order 12170. This renewal, therefore, is distinct from the emergency renewal of November 2015.
This notice shall be published in the Federal Register and transmitted to the Congress.
BARACK OBAMA
THE WHITE HOUSE,
March 9, 2016.