Iranians visiting the palace of King Darius in the ancient Persian city of Persepolis near Shiraz in southern Iran in September 2014. The Islamic republic is now a booming destination for Europeans seeking an adventurous vacation. Even tourism from the US is picking up, say industry insiders.PHOTO: AGENCE FRANCE-PRESSE

* * * With lifting of most sanctions after nuclear deal, the Islamic state opens up to foreigners
TEHERAN • For all of Iran's attractions - breathtaking scenery and numerous World Heritage sites, among other things - there are plenty of downsides to vacationing in the Islamic republic.
Alcohol is forbidden. There is very little nightlife, at least in public. All women, including visiting foreigners, are obliged to wear a headscarf.
None of that has changed, but suddenly, Iran is a booming destination for Europeans seeking an adventurous vacation. Even tourism from the United States is picking up, industry insiders say.
"I knew Iran only through the image the government presents in the media," said Ms Magali Magnim, 33, a video technician from Lyon, France. She and two friends have been in Isfahan, one of Iran's most historic cities, as part of a three- week tour. "But everything is so different from what I expected."
What surprised her was that it felt safe. "Here on the streets, I feel more safe than in France," she said.
For many tourists, a trip to Iran was always more than just a holiday. It was a journey into the unknown, with a frisson of danger added.
For decades, news coverage of the country was overwhelmingly negative, led by such topics as the Islamic revolution and the hostage crisis of the late 1970s; the death sentence issued against British writer Salman Rushdie; the crackdown on protests in 2009 and accusations that its leaders were trying to build a nuclear weapon. For outsiders, Iran has been a dark and scary place.
What was often lost was the other side of Iran: its ancient history, its young and open-minded population, its food and culture. Following the nuclear agreement, which led to the lifting of most sanctions and a reconnection to the world, the sharpest edges seem to have been taken off. Long suspicious of foreigners, Iranian officials - led by President Hassan Rouhani - are now welcoming them.
How many Western tourists are visiting is hard to gauge accurately. Officials say more than 5.2 million tourists visited last year, and that more are expected this year. But that counts the millions of Shi'ite pilgrims that visit annually.
Opening the country to tourists is part of Mr Rouhani's carefully planned outreach to the West, aimed at cementing ties after the nuclear deal. Iranian visa policies were already quite simple, with Europeans able to obtain one on arrival. After the nuclear deal, the government extended the tourist visa to three months from two weeks. Americans and Britons are treated differently, and permitted to travel the country only in guided tours.
Every breakthrough in the tourism sector is widely celebrated. Hotel development, in the deep freeze in the years of isolation, has kicked in, with three new properties in Teheran since 2015 and more planned.
Ms Magnim and her friends have found a way around the problem of hotel room shortages by using social media as their guide. Through a website called Couchsurfing, they spend their nights in the houses of Iranians who want to meet foreigners. "When you stay in people's homes, you get to know the real culture," Ms Magnim said.
The number of Iranians offering beds and couches to crash on has mushroomed in recent years, to over 36,000 from virtually nothing, the Couchsurfing website reports.
Mr Reza Memarsadeghi, 43, who studied philosophy in Canada and returned to Iran to take care of his ailing father, is now known as the "Godfather of Couchsurfing", having hosted more than 1,000 foreigners in his parents' basement.
But mixing with foreigners is already suspicious, to Iran's hardliners at least, and having hundreds sleep over is too much even for those seeking better ties with the West. In August, Mr Memarsadeghi was arrested and charged with making "propaganda against the Islamic republic", for hosting Western men and unveiled Western women who were mingling. He is awaiting trial. Still, he wished that even more foreigners would come to Iran.
"It's all about people meeting people, that will change the world."
--- ---
... 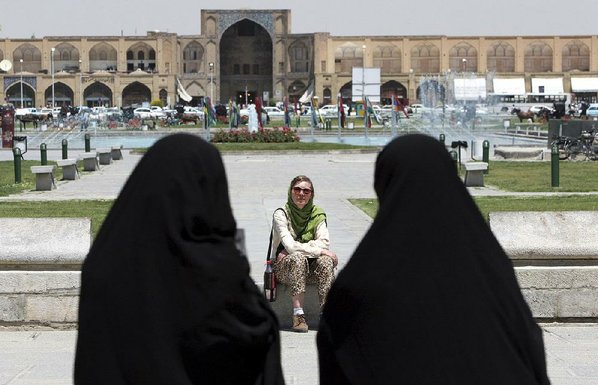