Persian Lion of the Gir Park

An Asiatic lion, found only in Gir National Forest in India.

* * * The Gir Forest in India is home to one of the most successful conservation programmes for lions. Kevin Galea gets up close and personal to some of them.
Conservation areas are bad for the back. The Gir Forest in Gujarat, west India is the last remaining home for Asiatic or Persian lions. It also has the largest number of marsh crocodiles, leopards and sleeping policemen.
As well as a highly successful breeding programme of potholes, their numbers grow every night.
If you go on an Indian lion safari you will be in for a bumpy ride. The Gir is made up of 400 partially-tarmaced kilometres from Ahmedabad, which one brochure described as “a city flourishing in pollution.”
I decided to forgo some of the unique on-site attractions of the family-friendly Fern Resort in Sasan Gir – ranging from kite flying ( seasonal) to jiggery making, beginners’ kabaddi, lemon and egg racing, kho kho (tag), musical chairs and even ‘make your own lion mask’. Instead, I went on a three-hour, £120 early morning jeep safari to spot a rare gene pool.
“Isn’t he handsome?” said my English-speaking guide Mr Bhikku. “A really good-looking fellow.”
Ten yards away from us, a lion was dozing off his early morning kill and, although we remained upwind, he was audibly suffering from unneutralised stomach acid.
Under a nearby flame tree, a group of lionesses picked at the carcass of their breakfast, a spotted chical deer.
A crested serpent eagle circled overhead. Vultures queued in the tree tops. A boar scurried into the undergrowth. “We are all vegetarians here,” smiled Mr Bhikku.
“There is no dearth of bush meat for the king of the jungle!” He tilted his head, giving a textbook wobble. “The shiyals and sharakhs will be close by – those are the jackals and hyenas.” 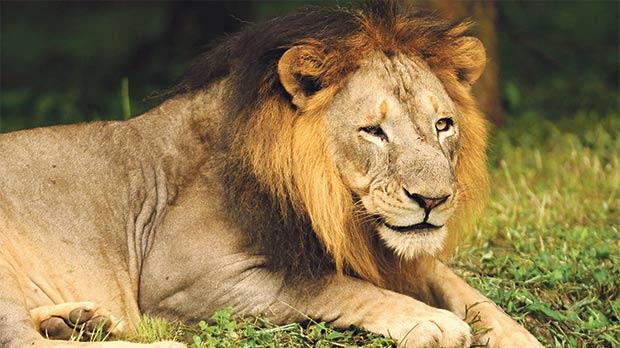 It was 7am and already 40°C. There were four of us on the dawn tour – an American, a German couple and me. The American couldn’t close his aperture and went on and on about preventing motion blur and how he was on evaluative metre mode in JPG format and trusting to horizontal stabilisation. He thrust his outsize lenses past my nose. He was eager, he said, to add to his on-field wildlife portfolio.
He asked me what I was using. I said “C2H5OH”. To reduce camera shakes I had invested in a tourist alcohol licence. Gujarat is India’s one dry state.
We bumped up and down through the scrub. Every tree root tested the coccyx. Our guide spoke of rock pythons and spectacle cobras.
“Tigers are found across 17 Indian states but lions only in one. The dry deciduous forests of north-west India, an one hour flight from Mumbai, are the last remaining habitat of the Asiatic or Persian lion. It is the only place in the world where you can see “Leo panticara” in the wild.
We stopped. Bhikku put his finger to his lips and shushed us. “Babbar sher.”
Asiatic savaj lions were removed from the critically-endangered species list in 2005
Another bloated lion panted in front of us. 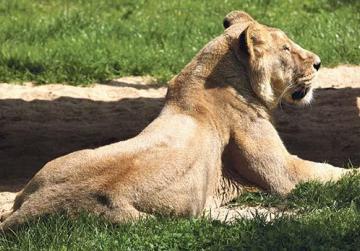 The female Asiatic lion, also known as the Indian lion.

* * * “Gir forest management has become a model for the study of human-wildlife management,” he whispered. “We have lady rangers who look after the lions. For some reason, they trust them more than they trust men men. We have just had our lion census. It happens every five years. There are no issues, only good news. The lions are surviving and thriving.”
We moved further into India’s largest tract of semi-arid deciduous forest.
Begun in 1962, the Gir Lion Project is a conservation success story. The first count was undertaken in 1880 by a Colonel Watson. He recorded 12 lions. The first Forest Service tally was in 1963 (285). In 2010, 411 lions or “were recorded (97 males, 162 females and 152 cubs).
The most recent census – the 14th – revealed a 27 per cent increase in lion numbers; 109 males were counted as well as 210 females and 213 cubs.
A lioness sprawled under a carvanda tree. They live separately from males. They can have six litters. Once, the presence of lions was widespread from the Middle-East to Greece and north and east India. However, they died out in Europe some 2,000 years ago. They were hunted to near extinction in India by princes, maharajahs and Brits until the Nawab of Junagadh banned hunting at the end of the 19th century. 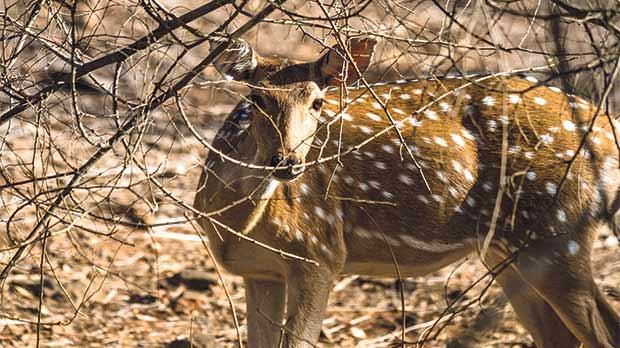 * * * There may be now 48 official tiger reserves in India. The tiger, with its 2,000 wild population, might bring in more tourism revenue but the lion, thanks to Indian PM Narendra Modi, has been re-instated as the national animal. In 2007, Modi, who was born in Gujarat, started a programme to involve more female villages in conservation work.
“Poaching and timber felling is a problem,” explained Bikkhu.
He introduced us to one of the Blue Caps or Behens (sisters). “They are the famous cat women of Gir!” He laughed.
“We are preserving our heritage,” said Sonal. She was sitting astride her Honda Hero motorbike. She held a walkie-talkie and she was dressed in khaki. “The lion is the symbol of Indian sovereignty and the four-headed lion is on our bank notes. The Persian lions are the last remaining descendants of the lions of Daniel, Androcles and the Roman gladiators. They are our pride, but Gir also has largest population of leopards in India.”
A sambar raced past. She smiled. “That’s the menu!” A boar disappeared into the bushes.
Asiatic savaj lions were removed from the critically- endangered species list in 2005. A breeding centre has been established at Sakkarbaug Zoo in Junadagh.
A lion yawned and stretched in front of us. So did the Germans. The American kept clicking.
Back at the Fern, I birdwatched from my balcony, ticking off black drongos, tailor birds, sunbirds, green bee-eaters, rose ringed parakeets and the charming and very helpful hotel manager, Debasish Muduli. He asked me whether I was enjoying the aviculture.
“They are our most important guests. But the savaj and sinh are the king of the jungle here. Long live the lion king.”
We heard a camera click and looked over at the American’s room. The manager smiled and handed me a leaflet.
“Photography vantage points within the resort attract a lot of birds and offer complete contentment to the greedy lenses of enthusiastic camera.”
Blurbs never lie. Shooting things is still a popular pastime in India.
The writer flew to India from the UK using Jetairways.com. The closest airports to the Gir are Porbandar and Keshod. He stayed at the Fern Gir Forest Resort (www.ferngirforestresort.com)
www.girnationalpark.in
--- ---
...

Auto to Oil Shipping Companies Poised to Profit From Iran Accord...