Where did Somonids (Samanids) Rulers of Bukhara Disappear?

Where did Somonids (Samanids) Rulers of Bukhara Disappear? ...
theasian.asia 23/11/2016 History

Aftab Kazi on 23 November , 2016.
Sultan Ismail Samani established the foundations of ruling Sammanid dynasty in Bukhara which ruled from 875 to 1040 AD over regions of Central Asia that now comprise modern Uzbekistan, Tajikistan, Kazakhstan, Kyrgyzstan, and Turkmenistan. The tomb of Sultan Ismoil (Ismail as spelled in the Middle East) with its Zoroastrian and Buddhist architectural design still decorates the beautiful old town of Bukhara that is now a part of the Republic of Uzbekistan and remains the focal points of many pilgrims from all over the world. Many Bukharans believe that wishes desired at the tomb are always accomplished. In the adjacent modern Republic of Tajikistan, Somoni is valued as the national symbol and Dari (early Farsi), developed in the Court of Samanids remains the national language.
However, historians and laymen alike often wonder what happened to the Royal court of Sammanid and their family members. By now one cannot find any Somoni either in Uzbekistan or Tajikistan. Honorable professor Dr. Richard Nelson Fry of Harvard University wrote in his book Bukhara (Costa Mesa, CA, Mazda Publishers, 1996) that the last Sammani he met in the city was in 1960. Iranian and other Central Asian histories remain void of any mention about the Sammanids. The Royal family simply disappeared from the world history without any trace after Mahmood Ghaznavi, one of the Samanids appointed governors of Ghazni (also called Ghazna, now in Afghanistan) together with the Karakhanids of modern Kyrgyzstan overthrew the Sammanid dynasty after capturing Bukhara in 1004.
During my several visits to the region I always wondered what happened to the Samanids, the Royal dynastic family of the Bukhara State? During my professorship at the American University of Central Asia (2005-7) with students from all over Central Asia including Uzbekistan and Tajikistan, I often asked my students about the whereabouts of Somonids. My Tajik students often answered that they have some Somoni (Samani, as spelled outside Central Asia) still living in Tajikistan, but simultaneously thought about my question with a surprise.
In January 2013, during a Central Asia related IDSA conference in Delhi, Dr. Abbas Malki, former deputy foreign minister of Iran and I thoroughly discussed the whereabouts of Somonids. He told me that none of the Iranian histories has any mention of this royal family. By then, I had been researching our histories in Sindhi (modern Pakistan) language. The history of Sindh also includes some rulers locally called as Sammas with Turko-Persian names such as Jam (Jamshed), Sanjar, Toghachi, and Tamachi, etc. In Sindh and also in parts of modern India some Rajput tribes are also called Samma but they originate from Sami groups and have different local names. In my opinion, the name differences clearly differentiate them. But the question remains that what actually initiated such serious differences? History of Central Asia, particularly of the Ghaznavid dynasty offers no clue. 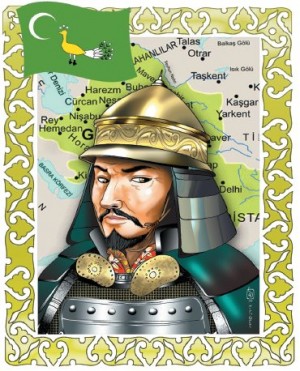 Although Sultan Mahmood Ghaznavi had his official historian named Behaqi, but he only chronicled every day affairs at the Court not the major happenings. Besides, Ghaznavi was never kind to the Royal Courts of Bukhara and, Khiva (now in Uzbekistan/Gurgang (now in modern Turkmenistan) another Turko-Persian Kingdom also conquered by Mahmood. People of Uzbekistan still haven’t forgotten Mahmood Ghaznavi for burning the scientific books (being a Muslim orthodox against the Greek school of thought) of the great Madrassa (college) libraries in Bukhara and Khiva/Gurgang which at that time had produced world-class scholars of medieval ages such as Khwarizmi, Abu Ali Sina (Avicenna) and Biruni, etc.
While reading Central Asian History and works written by Biruni, I realized that Mahmood Ghaznavi was accustomed to send the captured royal families to far away distant places together with their courtesans, artisans and small armies. He sent the royal family of Khiva to Nandana Fort nearby Kashmir in Sindhu Valley located at a three hour long drive from modern Islamabad. Biruni, who served the Khiva family was also a prisoner of war and spent much of his life at Nandana Fort, where he very deeply acquired the Sindhu Valley sciences, such as astronomy, medicine and local languages, the knowledge that ultimately culminated into one of his major works now called Hindustan (translated into English as India).
Our esteemed Dr. S. Frederick Starr chairman of the Central Asia-Caucasus Institute & Silk Road Studies Program at SAIS, Johns Hopkins University and author of his latest monumental work The Last Enlightenment: Central Asia’s Golden Age from the Arab Conquest to Tamerlane (Princeton University Press, 2015) and an admirer of Biruni, while attending a conference in Islamabad, very much wished to visit the Nandana Fort where Biruni had measured the world circumferences through astrolabe, even predicting the existence of the American continent using his astronomical knowledge (Biruni joined the Court of Ghazna in his late age). We could not visit Nandana Fort for security reason, but instead visited the ancient Taxila a historical city, capital of several Sindhu Valley rulers such as Kanishka and Asoka, and where the ashes of Mahatma Buddha are also buried. History readings established that Mahmood sent far away from the Royal family of Khiva/Gurgang. Thus it is was very likely that he also sent away the Samanids of Bukhara to another faraway place. But the question is where?
My own Sindhu Valley background and interest in the history of Sindh compelled me to research the history of Sammas, in particular those with Turko-Persian names, who also emerged as rulers, and ruled Sindh approximately 400 years after the fall of Soomra dynasty who succeeded Arabs in 9th century AD. Although I have read various histories of Sindh during my student life, on my recent two-week-long visits to Sindh in late December 2015, I had the opportunity to re-read a 17th century history of Sindh titled Tuhfatul Kiram (Sindhi Adabi Board, Jamshoro, 2011 authored by Mir Ali Sher Qaniue Thattvi in Persian, from Thatto, then capital of Sindh under Sammas and once a major trading center/emporium that was constructed on the model of Bukhara during the Samma rule).
The translation in Sindhi language was completed by Makhdoom Amir Ahmed and edited by Dr. N.A. Baloch in 1975 and several editions have been reprinted since. One thing struck my mind that during the early 11th century the place of Kalakot (Kala Fort, located nearby the Makli Hills) overnight was renamed as Samoee (Samma city as pronounced in Sindhi language, pages 366-367). Author does not explain how, but inquisitive minds with some knowledge of broader Central and South Asian history could easily question, “Are Sammas of Sindh with their Turko-Persian names the Sammanid (Samma in local Sindh vernacular). Connecting various scholarly dots, I realized that that is very likely the fact. After the Ghaznavid conquest of Bukhara, Samanids did not disappear, but the entire royal family was sent far away to Sindh and settled at the Kalakot, which after their arrival started to be called Sammoee. That makes considerable sense.
Mahmood Ghaznavi attacked Sindhu Valley/ (Western Hindustan as Central Asians and Iranians called it) seventeen times and controlled the entire Sindhu Valley land area that is now called Pakistan. He even captured and destroyed Mansura, the Arab Capital of Sindh (Al-Hind as called by Arabs and Persians). After the fall of Arab rule in Sindh in the 9th century AD, a local tribe of Soomra (supposedly converted Muslim from Buddhism after the Arab conquest) ruled as a dynasty approximately 400 years. With Ghaznavid conquest of Sindh, they accepted the suzerainty under Ghaznavids providing an annual tribute to Mahmood. Kalakot was under the Soomra rule.
Local histories tell us that Soomras did not appreciate but were compelled by Ghaznavids to accept the royal Sammanid family of Bukhara who arrived with their courtesans, artisans and a small army. Kalakot is located on Makli Hill nearby a city then called Nangar (trading center in local Larri [end of the river area] vernacular). Within some years the newly arrived Samanids localized, now called Samma in Sindhi language, established a new town next to Nangar named Thatto on the model of their old city of Bukhara with hundreds of Madrassas, mosques, etc. The new city became known as Nangar Thatto, which still remains as a historically important trading center, located forty miles nearby modern Karachi, albeit it now remains in dilapidated condition. Overtime, the new generations of Sammas localized and cultivated immense influence, so much so that after the fall of Soomras, Sammas (Samanids) emerged as new rulers of Sindh and ruled Sindh for nearly 400 years. Their rule was often disturbed by the warring tribes of Central Asia, namely Khiljis, Ghorids, and Afghan Tar Khans, etc. the new Central Asian rulers of Hindustan. There rule however was confined to the southern parts of Sindhu Valley and often subordinated to the Muslim rulers in Delhi with annual suzerain tribute.

Sammanid or Sammas of Sindh were lucky enough to have been deported to Kalakot in Sindh. They were already familiar with Sindh as their Bukhara state carried on trading with the Gulf and nearby regions through the ports of Sindh. Several Samma princes already lived in Sindh for trading reasons and had married with the royal Muslim families of Gujarat and Kutch, regions that are considered as the last leg of the Sindhu Valley Civilization (now a part of modern India).
Therefore, the Royal Sammanid dynastic family did not disappear but was relocated in Sindh where they were renamed as Sammas under local vernacular and ultimately emerged as new rulers. Their rule is considered legendary by the people of Sindh. To this day, Jam Tamachi remains as an undisputed distinguished fabulous ruler of Sindh, treated as a Hero in good parts of Sindhi folklore and literature. The other famous Samma rulers include Jam Nizamuddin, Jan Nindo, etc.
Sammas are now living in different parts of Sindh and many of them are also engaged in the domestic politics of modern Sindh. At least one of them a Toghachi from the Thar Desert region also served as Chief Minister of Sindh during the military rule under President Musharraf. Many are still called Jam(s). Two weeks ago I shared this research with the Ambassador of Uzbekistan who was kind enough to visit my home in Islamabad. He became enthusiastic and requested that I must very soon write and publish an article. Like Uzbekistanis, people of Tajikistan who cherish Somoni (Samani –Samma) as their national Hero will also appreciate this research.
--- Samanian , Samanian Dynasty , Samanid , Ismail Samani , Samanids , Samani ---
...