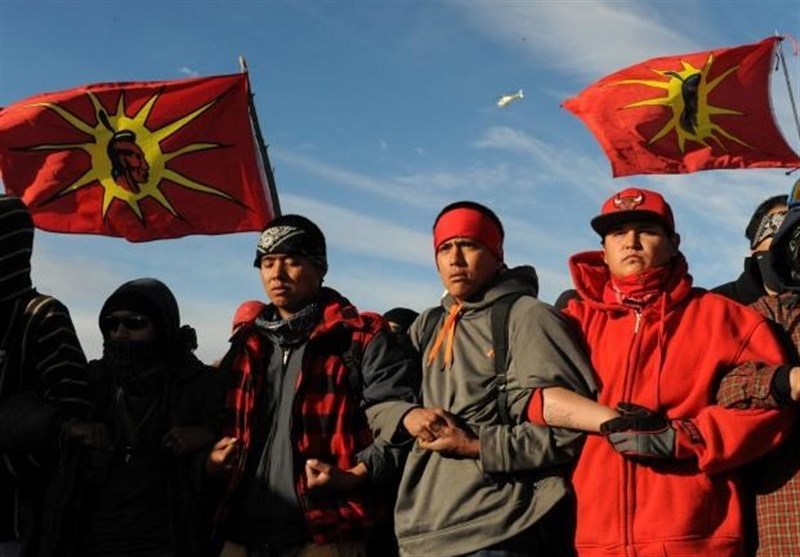 TEHRAN (Tasnim) – American Activists protesting the continued construction of the Dakota Access Pipeline must shut down one of their camps by Dec. 5, the Army Corps of Engineers ordered in a letter sent to the Standing Rock Sioux Tribe's leader.
Citing increased violence between protesters and law enforcement and the increasingly harsh winter conditions, the corps said it decided to close its land to the protesters who have been there since early April. This will shut down the Oceti Sakowin camp, which is one of the three camps located near the construction site.
"Today we were notified by the US Army Corps of Engineers that on Dec. 5th, they will close all lands north of the Cannonball River, which is where the Oceti Sakowin camp is located," Standing Rock Sioux Tribal Chairman Dave Archambault II in a statement. "The letter states that the lands will be closed to public access for safety concerns, and that they will allow for a 'free speech zone' south of the Cannonball River on Army Corps lands,” NBC News reported on Friday.
Colonel Henderson, district commander of the Army Corps of Engineers, wrote that he had implored the Standing Rock Sioux Tribal Chairman Dave Archambault II to tell members of his tribe to move from the property north of the Cannonball River.
"I am asking you, as a Tribal leader, to encourage members of your Tribe, as well as any non-members who support you who are located in the encampments north of the Cannonball River on Corps' lands to immediately and peacefully move to the free speech zone south of the Cannonball River or to a more sustainable location for the winter," he wrote in the letter to the chairman.
The decision, Henderson wrote, was to protect the public from violent confrontations between law enforcement and protesters, who call themselves "water protectors," as well as the "harsh North Dakota winter conditions."
The letter was sent after a protester's arm was severely injured by a concussion grenade that protesters contend was thrown by local law enforcement. The police also sprayed protesters with a fire hose in near-freezing conditions.
The free speech zone the corps has proposed is slightly more than 41 acres, located south of the Cannonball River and provides clearer jurisdiction for police, fire and medical units.
The letter makes it clear that the land will be closed to the general public and anyone who enters it will be considered trespassing and could face prosecution under federal, state and local laws.
Earlier on Friday, Bismarck police made more than 30 arrests at a local mall for criminal trespassing involving the protesters. In total, approximately 100 protesters had gathered to generate a prayer circle, which, police say, disrupted Black Friday shopping.
The protests — which have continued since their inception in April and are now the largest American Indian protest in modern history— stem from a continued demonstration against a 1,170-mile oil pipeline.
Thousands of people have flocked to North Dakota to aid the Standing Rock Sioux Tribe, who believe the pipeline could contaminate their water source, the Missouri River, and desecrate the tribe's sacred sites.
The company behind the pipeline, Energy Transfer Partners, says that it has taken measures to prevent such leaks, that the pipeline is far safer than transporting oil with trucks or trains and that there is no archaeological significance to the area.
--- ---
... presstv.ir 28/10/2016 Nature
*** A line of police move towards a roadblock and encampment of Native American and environmental protesters near an oil pipeline construction site, n...View Details»

Iran-US Direct Flights May Soon Be Taxied to Runway... tasnimnews.com 31/10/2013 Economy
TEHRAN (Tasnim) – Direct flights between Iran and United States may be launched in the near future, preferably from Iran’s Kish Island, an economic ac...View Details»