Why Iran Is Opening Its Doors to Bold Architectur

Why Iran Is Opening Its Doors to Bold Architectur ...
architecturaldigest.com 09/12/2016 Culture

With 21 UNESCO World Heritage sites already within the country’s borders, the modern architecture movement appears to be making up for lost time
Text by Nick Mafi
Posted December 8, 2016
The Tabiat Pedestrian Bridge, which won the 2016 Aga Khan Award for Architecture, is located next to the Holy Defense Museum in Tehran and designed by the Iranian architect Leila Araghian. Barzin Baharlouie

* * * For much of the world, the image of Iran is hardened by its politics. Since the Islamic revolution of 1979, the country has been transformed from a pro-Western stronghold that promoted freedom and equality to the very antithesis of democracy. Yet a visit today to the capital of Tehran might change your perspective. Of course, the Iran we see in the news is still there, with all its anti-American propaganda. But beneath that increasingly fragile veneer of extremism is a growing sense of global curiosity and national pride. This cultural shift is signaled by the country’s first-ever Fashion Week, pro-Western art throughout the city, and especially the flourishing of modern architecture.
“Right now, the massive trend in Iran is to design and build structures with the goal of being recognized by the media,” says Hooman Koliji, associate professor of architecture, planning, and preservation at the University of Maryland. “Therefore, there is an implicit effort and competition to create forms that look different and, dare I say, sexy.” This approach to modern architecture has garnered great results for Iranian talents such as Leila Araghian, whose design of Tehran’s Tabiat Pedestrian Bridge took home the prestigious 2016 Aga Khan Award for Architecture, bestowed every three years. Certain elements of Araghian’s bold, modern design (pictured above) incorporate motifs of Iranian architecture dating back centuries. With its close proximity to the spectacular Alborz mountain range, the Tabiat Pedestrian Bridge became an instant viewing gallery for the building’s natural surroundings. 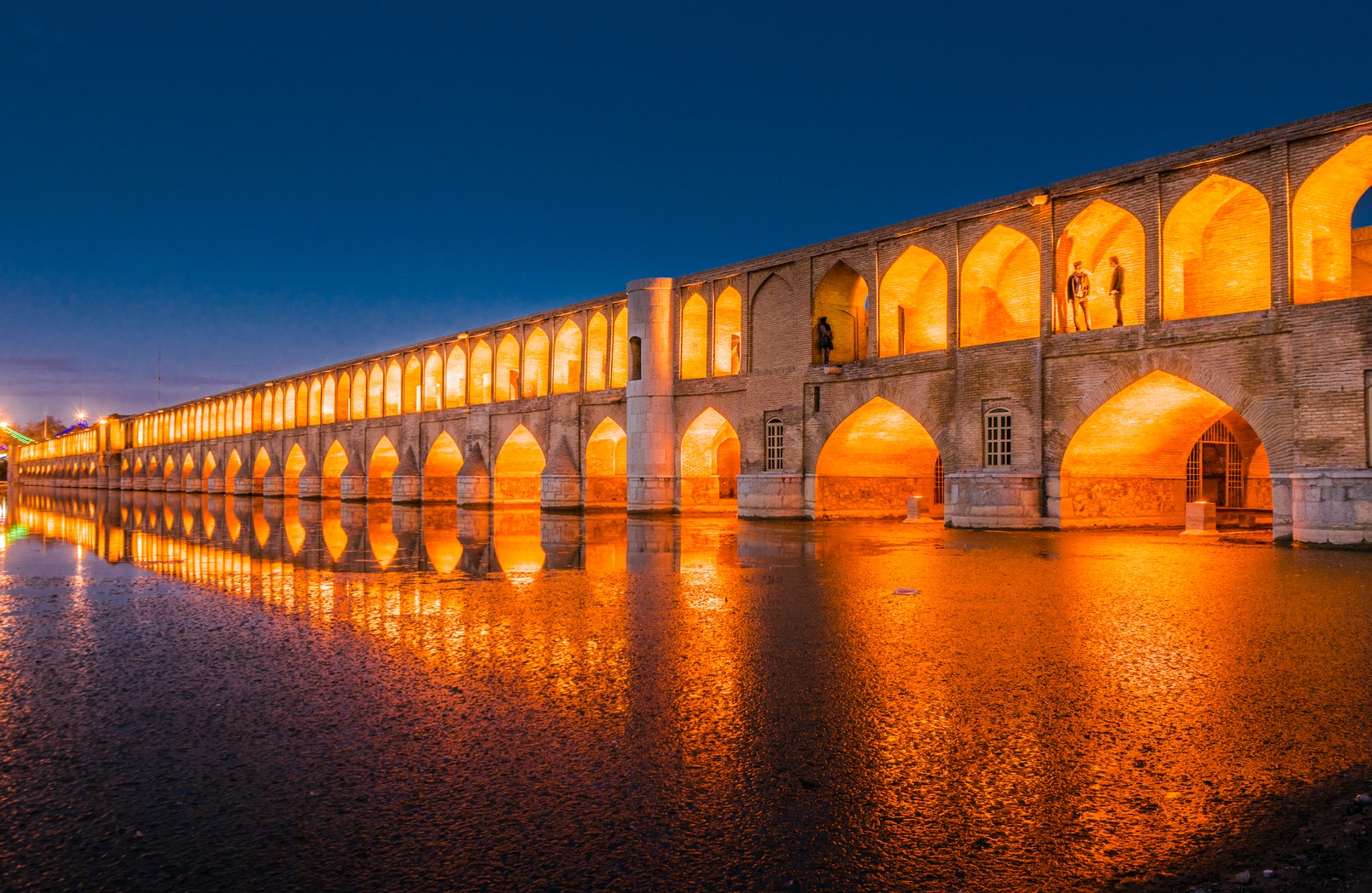 An image of Si-o-se Pol, one of eleven spectacular bridges in the city of Isfahan, Iran. Completed in 1602, the structure is nearly 1,000 feet long.Getty Images

* * * Another iteration of this connection with nature can be seen in the ski resort designed by the Tehran-based firm, RYRA Studio. Located in the mountains just north of Tehran, the bone-white structure blends in naturally with the snow-capped mountains surrounding it. “While the shapes and angles and sizes of structures have changed over time, the importance of nature has maintained a central role in Iranian architecture. You can see that fundamental theme from the Achaemenids dynasty (550–330 B.C.) through the Qajar dynasty (1789–1925 A.D.),” Koliji notes. 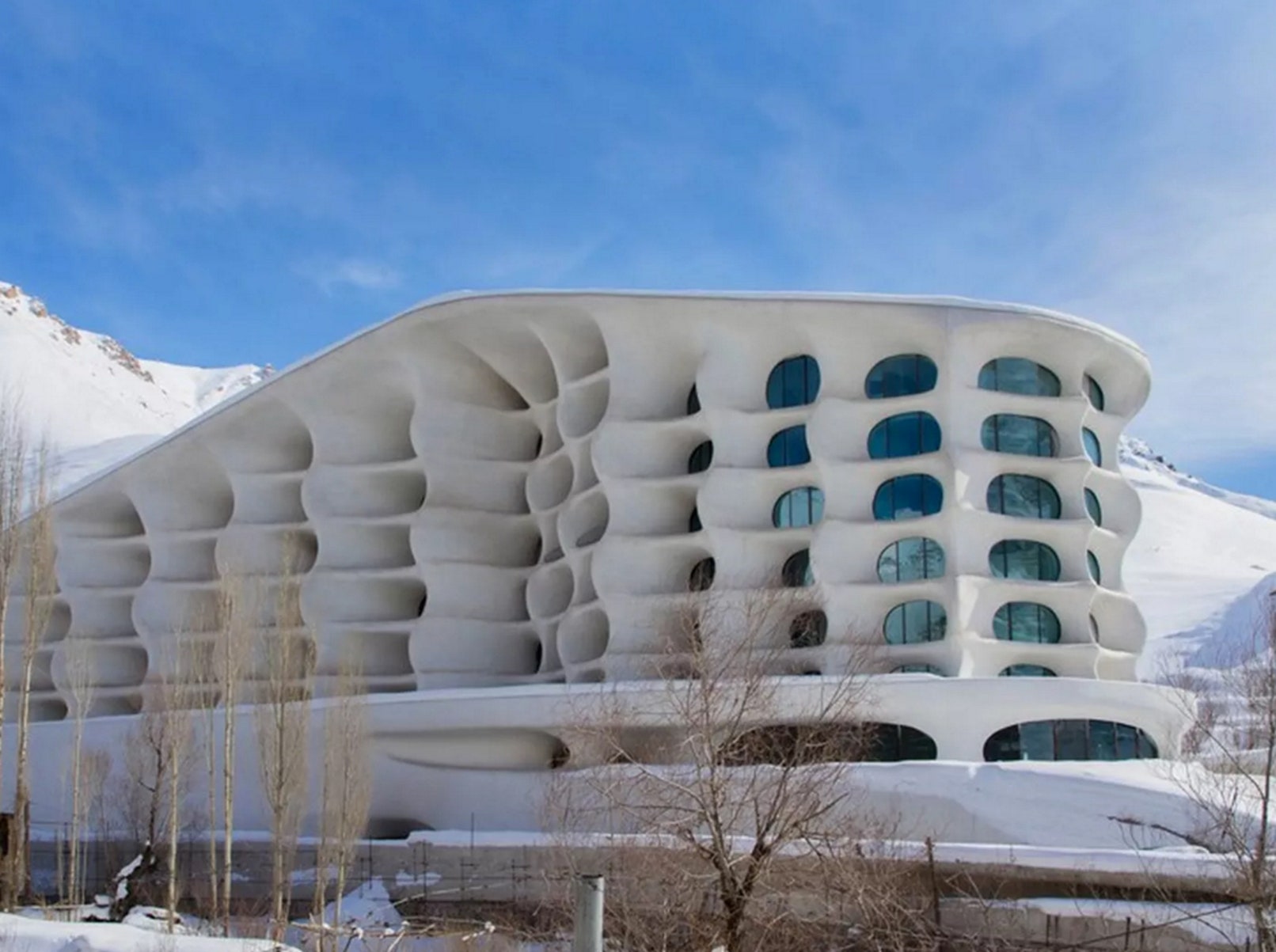 * * * A native of Tehran, Koliji received his undergraduate and graduate degrees from nearby Shahid Beheshti University. After a brief stint as a faculty member at his alma mater, he moved to the U.S. to pursue a second masters and second Ph.D. in architecture and design research. Now a tenured professor at the University of Maryland, Koliji has written and lectured for more than a decade about historic and contemporary Iranian architecture. It’s difficult to find many people who have more knowledge, or pride, in Iranian architecture than Koliji. And it is both knowledge and pride that ties modern Iranian architecture to its past–an understanding and an appreciation for all that came before.
Indeed, to understand Iran’s current architecture, it’s important to examine the significant structures created by its people in the past. “Of course, there was Persepolis, which was the capital of the Persian Empire and a turning point in the culture,” Koliji explains. “There was also Arg-e Bam, a city in southern Iran [pictured below] that’s famous for being the world’s largest brick structure and listed by UNESCO as part of the World Heritage Site.” By the mid-20th century, one could find in Iran the same Brutalist architecture seen in the Western world. After the revolution of ’79, however, everything changed. “There was an expectation to rediscover an Islamic identity in architecture,” says Koliji. High-profile structures, such as the Dezful Cultural Center, expressed this shift in aesthetic.

The entrance to a mosque in Isfahan, Iran. The structure is part of Imam Square, formerly known as Shah Square, which was built from 1598 to 1629 and is now a UNESCO World Heritage Site.Getty Images

* * * The 1980s brought a difficult period in Middle Eastern history, as Iran and Iraq battled in a bitter eight-year war. Its consequences were wide-ranging and even bled into Iran’s architecture. “With a big demand to rebuild the country and provide housing for the fast-growing population, there was a flourish of low-quality buildings (both in design and construction). With the exception of a few public buildings, which were commissioned to top design firms, most buildings suffered low-quality design and execution,” says Koliji. 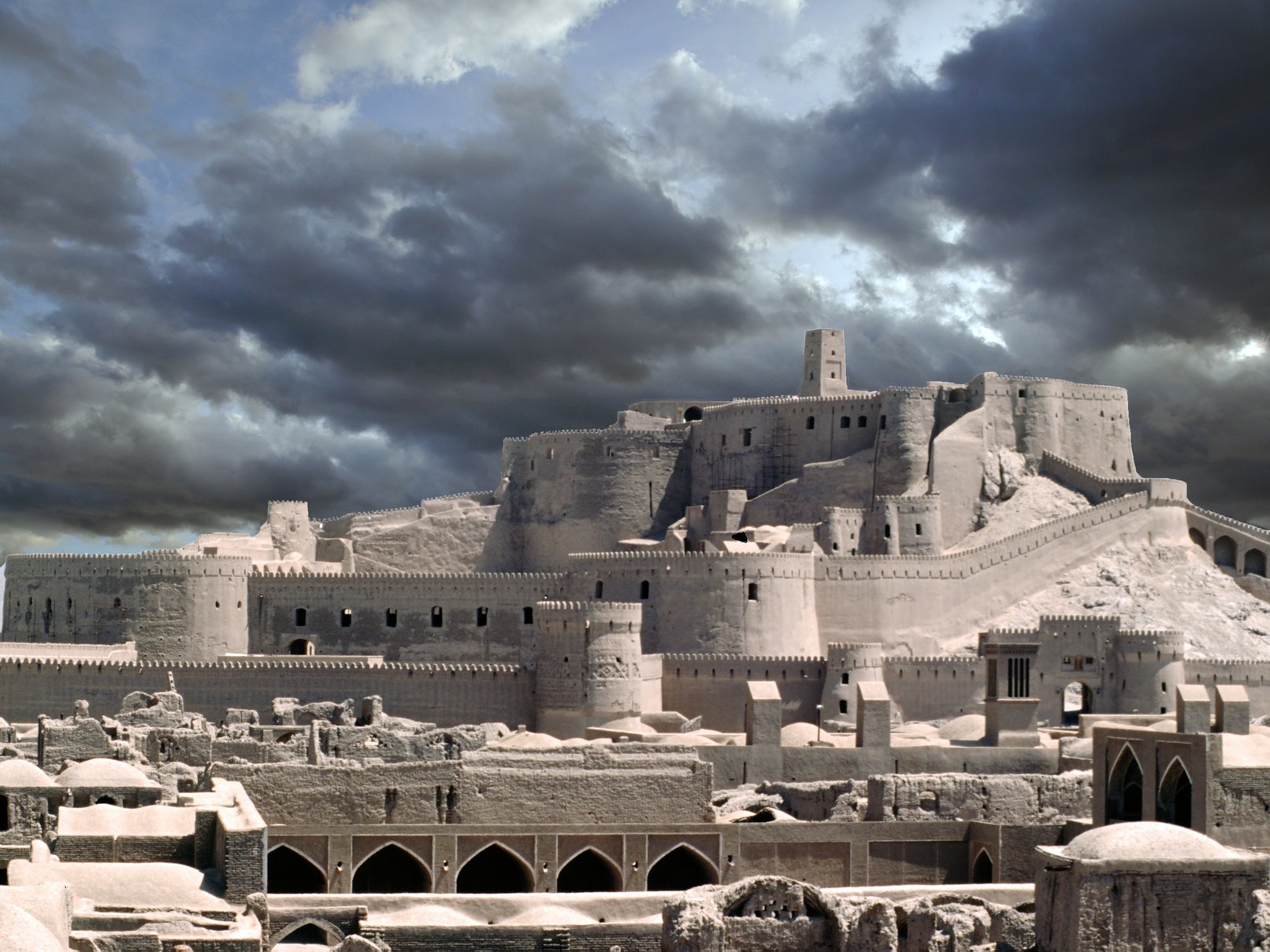 * * * Following the revolution, the U.S. imposed sanctions against the country. In 1995 and again in 2006, those sanctions were significantly expanded. During this time period, the financial strains were felt throughout the country—architecture not being an exception. “Since the government funds the large projects, many architects saw their contracts cancelled or, at best, suspended—in many cases, indefinitely—which really hurt firms. So designers turned to smaller-scale projects with private clients.” This, in Koliji’s opinion, was not healthy for the architectural integrity of the country. “Most owners dictated exactly what they wanted, and that’s how the homes were built. For example, in the decade after the Iran-Iraq War, it became popular for affluent families to build homes that were Romanesque in style.” 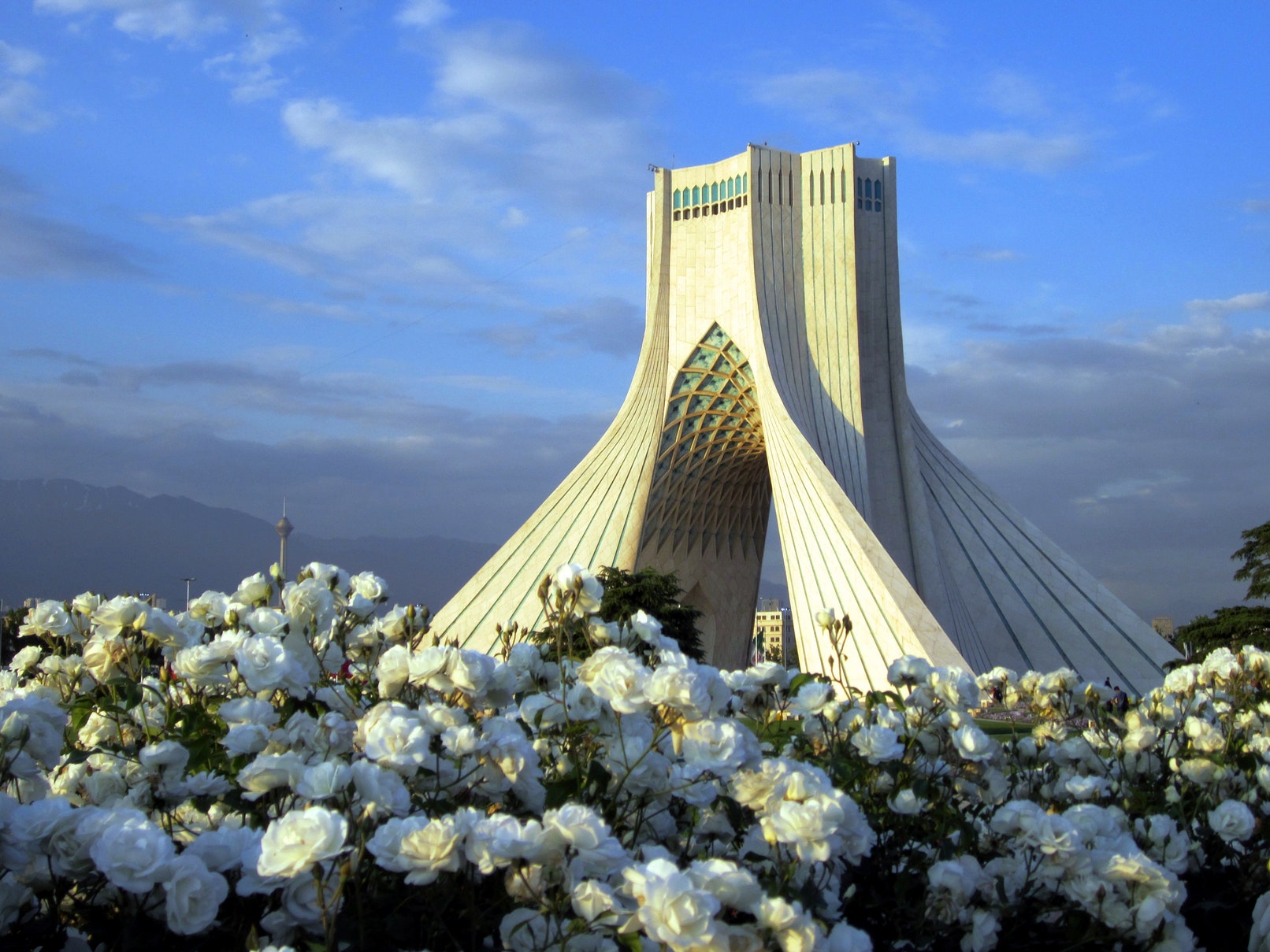 The Azadi Tower in Tehran was built in 1973 to commemorate the 2,500th anniversary of the first Persian empire. Getty Images

* * * As for the future of Iranian architecture? It’s still a bit hazy. Since Iran signed a nuclear deal with six other countries (including the United States), the economy appears to be moving in the right direction. And if such structures as the Tabiat Pedestrian Bridge or the RYRA Studio ski resort are any indication, the nation’s architecture appears to be following.
--- ---
...