Iranian artisans to script Modinama in the Capital

Iranian artisans to script Modinama in the Capital ...
dnaindia.com 05/01/2017 Culture 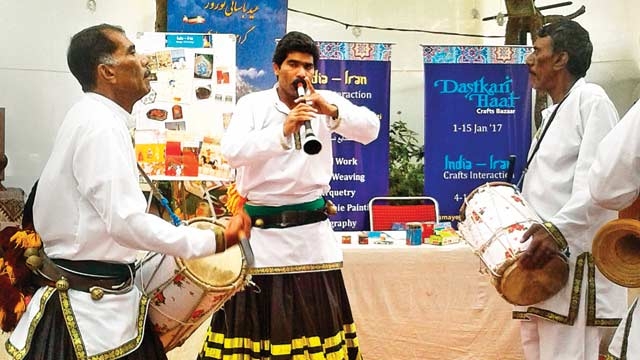 
Shweta Desai | Thu, 5 Jan 2017-06:40am , New Delhi , DNA
In an exhibition-cum-workshop, 'Namayeshgahsanaye-E-Dasti Iranva Hind', the Dastkari Haat Samiti and Iran Culture House have brought nine artisans from Iran and 200 artistes from India under one roof at Dilli Haat
For centuries, Persian artists, calligraphers and painters illustrated Indian tales, portraits of emperors and memoirs to create stunning manuscripts depicting the rich legacy of the shared ancient and civilizational ties.
In modern times, to celebrate the Indo-Persian cultural ties, a group of Iranian and Indian craftsmen are collaborating once again to bring to life the old Persian manuscript style with Indian miniature paintings, whose central story and character will revolve around Prime Minister Narendra Modi and his historic visit to the Islamic Republic of Iran last year.
In an exhibition-cum-workshop, 'Namayeshgahsanaye-E-Dasti Iranva Hind', the Dastkari Haat Samiti and Iran Culture House have brought nine artisans from Iran and 200 artistes from India under one roof at Dilli Haat. The highlight of this cultural interaction will be a collaboration of Iranian and Indian artistes to create a manuscript bearing signature styles of Persian and Indian art.
"The manuscripts in olden times told the story of journeys, of travellers going to far off lands and their experiences there. This manuscript will be a modern story on the journey of PM Modi to Iran last year and how he is trying to revive the old links between the two civilizations,'' Jaya Jaitly, president of the Dastkari Haat Samiti told DNA.
Apart from strategic and development agreements, Modi also signed a cultural agreement to revitalize the ancient shared cultural ties with the Persian empire. In his speech, Modi had reminded the audience about the great times when "Persian calligraphers wrote the scripts illustrated by Indian artists''.
Jaitly said the modern manuscript will replicate this format: Persian calligraphy enmeshed with Indian miniature painting. It will also include experiences of the artisans on their visit to India and working together with Indian artistes.
While the India-Iran relationship is old, political compulsions and international sanctions left the ties between the two countries cold and dormant. The current exhibition is an attempt to revitalise the art and cultural ties which drifted away in the 20th century. "The cultural way is the softest form of diplomacy to strengthen the ties by bringing the artists and the people together," Jaitly said.
Iranian ambassador Gholam Reza Ansari said that political and economic reasoning should not dictate cultural links and there should be open interaction between the two countries. "After all there is no difference between Indians and Iranians. We are the same,'' he said.
The manuscript—commissioned by the Indian Council for Cultural Relations (ICCR)—is written in Farsi, Hindi and English.
Iran depicted in Kashmiri art
In early 14th century when Sufi scholar and poet Mir Sayyid Ali Hamadani travelled with 700 followers in tow to spread the message of Islam in Kashmir, his visit made such an impact that along with Sufism the Valley's art and culture became infused with Persian influence. The weaves of carpets and shawls and the colourful fine traces of papier mache, typical to Iranian arts were made their own by the Kashmiri craftsmen. The influence of Iran in Kashmir became so deeply entrenched that the later was immortalized in the poems as Iran-i-Sageer (mini Iran).
--- ---
...