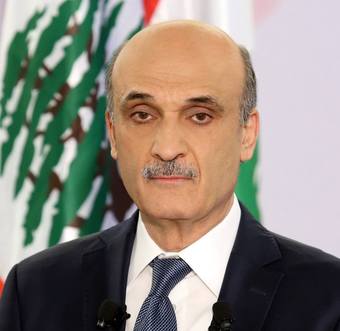 Lebanese Forces chief Samir Geagea said the upcoming visit of President Michel Aoun to Saudi Arabia will carry important issues particularly reactivating the military aide program for the Lebanese Army, and considered Aoun's travel to Iran as a “normal” procedure.
“Aoun's Trip to Tehran is a normal matter, and if Iran wants to provide aide to the Lebanese State, why not?” said Geagea in an interview to the Kuwaiti al-Qabas daily on Saturday, rejecting the notion about the return of Bashar Assad's influence on Lebanon or Syria.
On Aoun's visit to Saudi Arabia which will begin next week, Geagea described the step as “excellent. It will carry important issues mainly the military aide to the Lebanese Army and the return of Gulf tourists to Lebanon.”
The President is scheduled to kick start a trip to SA on Monday that will followed by trips to Qatar and other Arab countries.
On the possibility of running serious dialogue with Hizbullah, Geagea remarked: “There are no serious signals until now. What shall this dialogue be based on? Sayyed Hassan Nasrallah and I both do not like to play around, our constants are well known and we don't like to walk along mysterious and traditional politics.
“When Hizbullah decides that its time to make a State in Lebanon and limit the strategic decision to it, only then will we be able to agree with Hizbullah. We cannot agree on the trilogy of army-people-resistance. The State's institutions are known, and we only recognize the Lebanese army and security forces and apparatuses,” added the LF leader.
--- ---
...