These illustrated Persian manuscripts depict the highs and lows of love

These illustrated Persian manuscripts depict the highs and lows of love...
scroll.in 21/02/2017 Arts Zayd revives the fainting Laylá and Majnūn (Qays) in the wilderness in Laylá va Majnūn from the Khamsah of Niẓāmī written for the Timurid/Mughal Emperor Akbar I. Ascribed to Farrukh Chelah (BL Or 12208, f. 123r)

* * * With a written tradition stretching over a millennium, much of it still preserved in manuscripts, here are select examples of epic and romantic compositions from the British Library’s growing collection of digitised Persian manuscripts available online to observe wonderful and alternative responses to love, physical and spiritual.
We begin with a painting (Grenville XLI, f. 66v) illustrating a lyric poem or ghazal (rhyming a-a, b-a, c-a, and so on) by one the genre’s most distinguished exponents, Ḥāfiẓ of Shīrāz (d. circa 1202). Although its tone is initially celebratory, the composition continues by examining different aspects of the lover’s condition, gradually moving toward the melancholic. Couplets 1, 2, and 6 illustrate this shift:
Love’s musician possesses an amazing instrument and sound / every air composed strikes a chord.
May the world never empty of lovers’ laments / their sound possesses a delightful harmony.
Showing tears of blood, doctors commented / it is the disease of love, requiring heartrending medication.
The painting is broadly consistent with the ghazal’s narrative arc, showing seated musicians in the foreground facing several figures on a canopied stone platform. The mature male on the left is presumably Ḥāfiẓ addressing his patron, seated on the right, notionally depicted here as a youth absorbed in love’s sorrows. 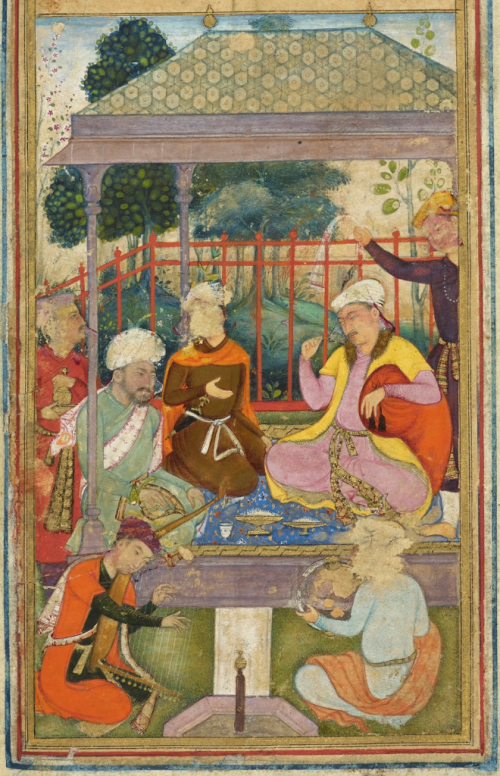 Illustration to a ghazal celebrating love and music from an undated Dīvān of Ḥāfiẓ. The painting is unsigned (BL Grenville XLI, f. 66v)

* * * Although the manuscript is not dated, it is thought to have been transcribed around 1600-1605 in Timurid/Mughal India, and illustrated very soon after. Some of the damage caused to other figures in the same scene is due to the partial obliteration of faces and strategic overpainting (now partially removed), ordered by later owners.
Another Dīvān of Ḥāfiẓ (Or 14139, f. 47r) refurbished with decorated margins just a few years earlier at the same court isolates the celebratory theme of the first couplet interpreted more straightforwardly as a European musical entertainer playing a fiddle-like instrument while dancing on the spot, and enclosed within an ornamental cartouche.
Epic poetry and romances play an important role in distilling specific personal traits and emotional states in the characters of the heroes, heroines, and lovers they seek to celebrate, and thereby humanising the ghazal’s expressive and frequently abstract repertoire of conceits and metaphors.
The exploits of the archetypal hero, Sasanian ruler Bahrām Gūr (Bahrām V, d. 438), are the subject of several works of epic poetry, notably the Haft Paykar, part of the Khamsah or Quintet of poems by Niẓāmī of Ganjah (d. 599/1203). In one of the finest manuscript treasures at the British Library, the interpretation of a distinctly amorous scene has been the source of some confusion (Or 2265, f. 221r).
The Haft Paykar’s allegorical narrative describes Bahrām Gūr’s encounters with seven princesses over the period of seven evenings. An illustration close to the beginning of the narrative appears at first to depict the first of the seven encounters, specifically, with the Princess of India dressed in black, representing Saturn. A closer reading of the text indicates the painting is an illustration from an edifying tale told by the Indian princess of King Turktāzī entertained by Turktāz, queen of the faeries.

Ghazal celebrating love and music from a Dīvān of Ḥāfiẓ dateable to circa 1470, with illumination added in the margins as part of later refurbishment (BL Or 14139, f. 47r)

* * * After a lengthy description of Turktāzī awaking in an enchanted garden, the mas̲navī (couplets rhyming a-a, b-b, c-c, and so forth) gradually recounts the impression made be the queen’s magical arrival and unveiling to expose her European (literally Rūmī or Byzantine) features and complexion. Following tender exchanges, the romantically-charged feast of duck (replaced in the painting by pomegranates) and wine takes on a renewed intensity. It is at this point the surge of passion is delicately summarised by the use of familiar musical metaphors establishing the convivial mood:
The musician entered and cup bearers departed / joyousness hardly needed an excuse.
Every imperforate pearl was pierced (in sequence) / every song followed another.
Dance opened the field to form a circle / entering on foot, skipping and gesturing.
In another mas̲navī from the same work, but a different illustrated manuscript (Or 12208, f. 122v), Niẓāmī records with particular sensitivity the doomed relationship of two pre-Islamic lovers, Laylá and Majnūn (originally known as Qays). Qays, distracted with love’s ardour for his beloved since childhood, Laylá, is driven to the wilderness where he is reduced to rags. It is at this point he is given the epithet majnūn, Arabic for ‘possessed by jinns’ or ‘maniac.’ Later, a mutual friend, Zayd, momentarily reunites Majnūn with Laylá in the vicinity of her tents. The scene of their dramatic meeting is evoked in the following selection of couplets:
Majnūn, upon seeing his beloved / glimpsing his soul in a dark veil.
He, alive, though spiritless / she, withholding her life, yet dead.
The two lovers collapsed, senseless / worldly sounds evade their ears.
Bloodthirsty beasts encircle / sharpening their claws in the dead.
The two fallen lovers remained / until midday on the path. 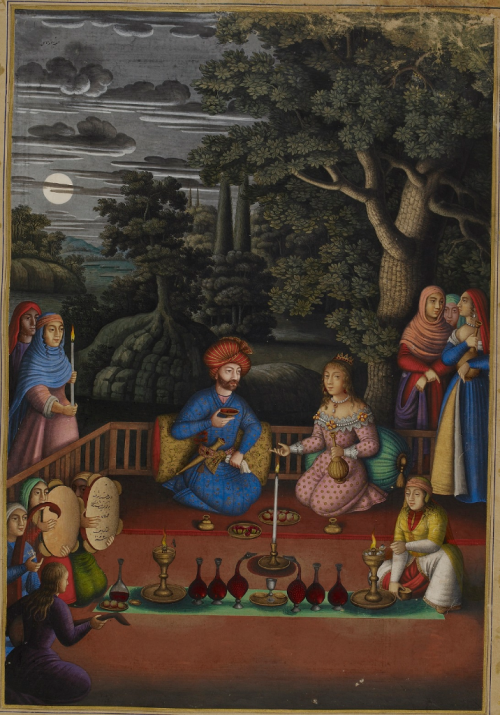 Scene from the tale of King Turktāzī and Turktāz, queen of the faeries, as told by the Princess of India in the Haft Paykar from Shāh Ṭahmāsp Ṣafavī’s Khamsah of Niẓāmī. Signed by Muḥammad Zamān, dated 1086/1675-76. For more on this painting see Some paintings by the 17th century Safavid artist Muhammad Zaman (BL Or 2265, f. 221v)

* * * We see in the exquisitely detailed painting by Farrukh Chelah (ascribed in the lower border) that Laylá and Majnūn are being revived by Zayd with a bottle of perfume, just as the text specifies. However, Farrukh Chelah has used this illustration as an opportunity to fill his composition with an array of vegetal, animal, and topographical features that go beyond the text, to make a visually stimulating whole.
Returning to the ghazal genre, a perennial concern to literary critics is the degree to which poets and their audiences, including later illustrators of their works, interpret meaning. Insofar as the Persian language is essentially gender neutral, that is, you cannot automatically infer from a text whether the subject is male or female in the absence of a gendered attribute, poets have in the past been able to encode into their compositions both heterosexual and homosexual references. Such constructive ambiguity, to borrow a recent term, has in turn been exploited by illustrators to respond to the demands of their patrons, in determining the male or female gender of the beloved as described.
In a painting from a lavishly illustrated copy of the Kullīyāt or compendium of collected works by Saʿdī (d. 690/1291), dated 1624 and made in Safavid Shīrāz, the poet’s place of birth (IO Islamic 843, f. 322r), we witness the interplay between words and the painted image. The scene shows men seated around a pool, several of them with books in hand, indicating a genial poetic gathering. The bearded man seated in a recess clasps the hand of an adolescent boy about to depart. The relevant couplet illustrated here does not, however, mention either the gathering of men, the reading of poetry, or the detention of a boy specifically, except for the daring khvājah, who is in this context a mature man. It is evident from the range of certain visual interpretations of gender in illustrated manuscripts of poetry that patrons and readers generally approached such nuanced subjects with latitude. An older man clasps the hand of a departing adolescent boy, based on a ghazal from the Kullīyāt of Saʿdī, dated 1624 (BL IO Islamic 843, f. 322r)

---Be it platonic adoration, romantic affection or star-crossed disappointment, Persian poetry has something to say about it all. ---
... 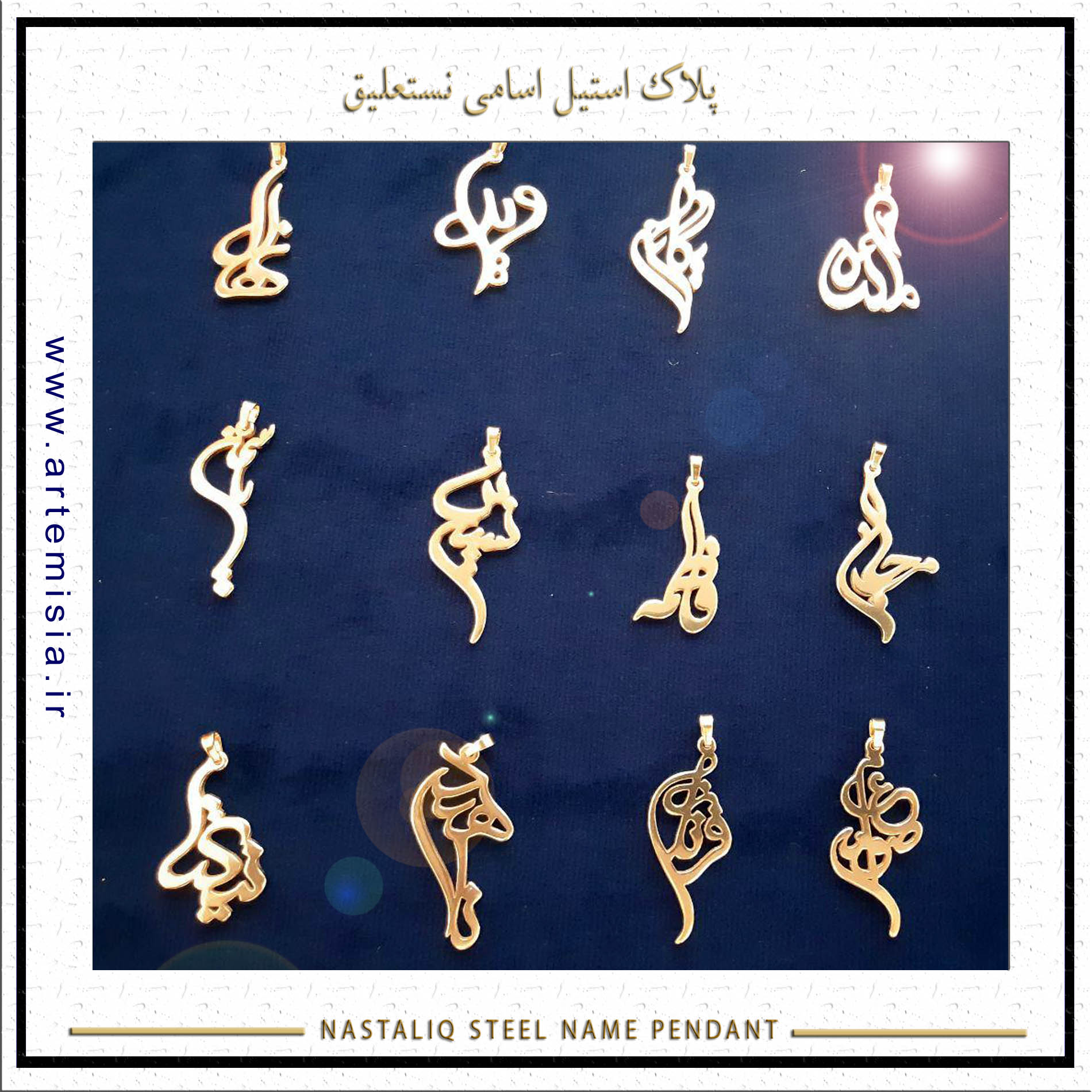 How the ‘Panchatantra’ travelled the world thanks to Persian and Arabi...

scroll.in 27/09/2015 Arts
Few books have been narrated, written, re-written, translated and adapted as much as this collection of tales of wisdom. Anu Kumar In the year 570 CE...View Details»