Incarceration of of Japanese Americans 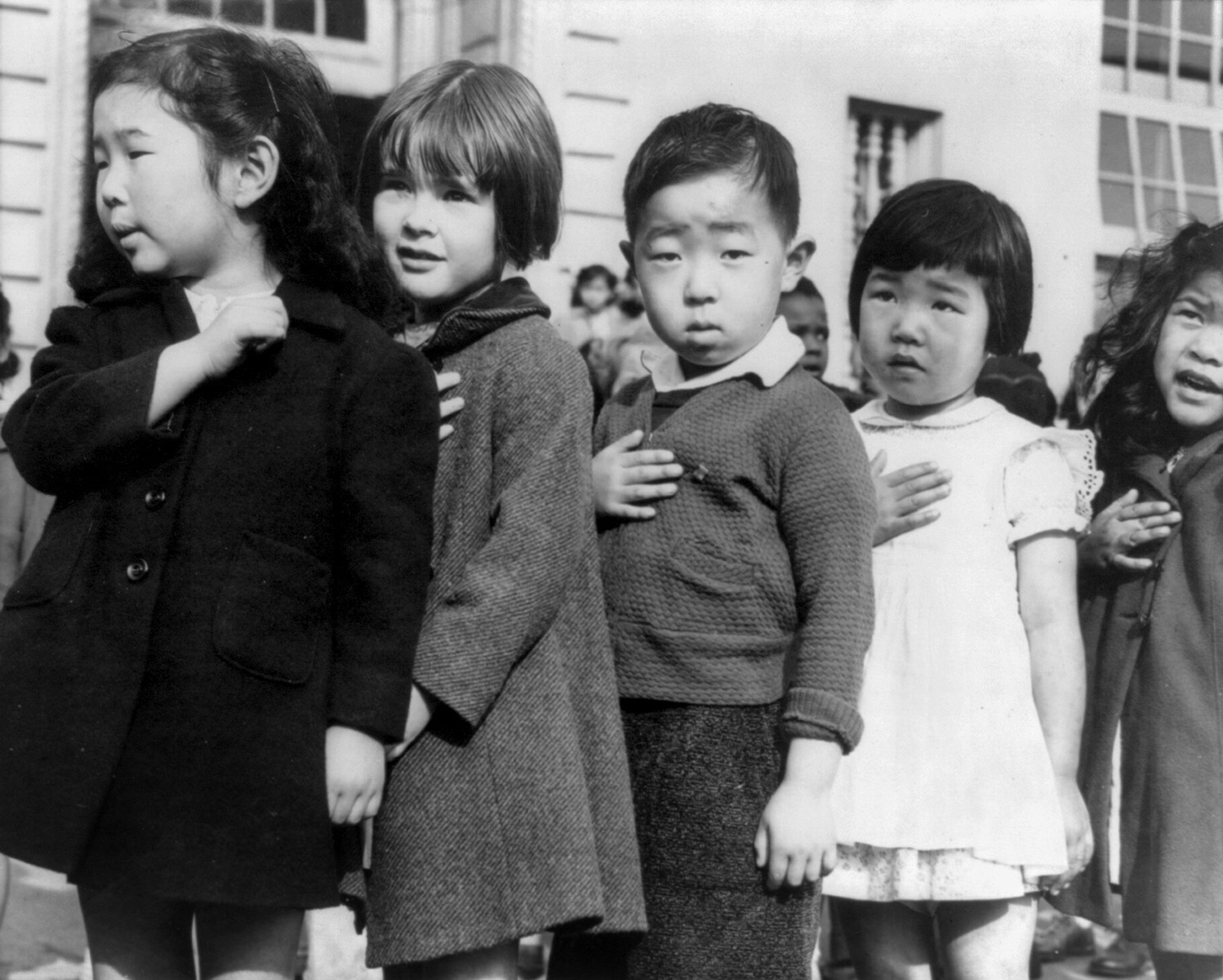 The internment of Japanese Americans in the United States during World War II was the forced relocation and incarceration in camps in the interior of the country of between 110,000 and 120,000 people of Japanese ancestry, most of whom lived on the Pacific coast. Sixty-two percent of the internees were United States citizens. These actions were ordered by President Franklin D. Roosevelt shortly after Imperial Japan's attack on Pearl Harbor.
Japanese Americans were incarcerated based on local population concentrations and regional politics. More than 110,000 Japanese Americans in the mainland US, who mostly lived on the West Coast, were forced into interior camps. However, in Hawaii, where 150,000-plus Japanese Americans composed over one-third of the population, only 1,200 to 1,800 were interned. The internment is considered to have resulted more from racism than from any security risk posed by Japanese Americans. Those who were as little as 1/16 Japanese and orphaned infants with "one drop of Japanese blood" were placed in internment camps.
Roosevelt authorized the deportation and incarceration with Executive Order 9066, issued on February 19, 1942, which allowed regional military commanders to designate "military areas" from which "any or all persons may be excluded". This authority was used to declare that all people of Japanese ancestry were excluded from the West Coast, including all of California and much of Oregon, Washington and Arizona, except for those in government camps. Approximately 5,000 Japanese Americans voluntarily relocated outside the exclusion zone before March 1942, while some 5,500 community leaders arrested immediately after the Pearl Harbor attack were already in custody. The majority of nearly 130,000 Japanese Americans on the U.S. mainland were forcibly relocated from their West Coast homes during the spring of 1942.
The United States Census Bureau assisted the internment efforts by providing confidential neighborhood information on Japanese Americans. The Bureau denied its role for decades, but it became public in 2007. In 1944, the U.S. Supreme Court upheld the constitutionality of the removal by ruling against Fred Korematsu's appeal for violating an exclusion order. The Court limited its decision to the validity of the exclusion orders, avoiding the issue of the incarceration of U.S. citizens without due process.
In 1980, under mounting pressure from the Japanese American Citizens League and redress organizations, President Jimmy Carter opened an investigation to determine whether the decision to put Japanese Americans into internment camps had been justified by the government. He appointed the Commission on Wartime Relocation and Internment of Civilians (CWRIC) to investigate the camps. The Commission's report, titled Personal Justice Denied, found little evidence of Japanese disloyalty at the time and concluded that the incarceration had been the product of racism. It recommended that the government pay reparations to the survivors. In 1988, President Ronald Reagan signed into law the Civil Liberties Act of 1988, which apologized for the internment on behalf of the U.S. government and authorized a payment of $20,000 (equivalent to $41,000 in 2016) to each camp survivor. The legislation admitted that government actions were based on "race prejudice, war hysteria, and a failure of political leadership". The U.S. government eventually disbursed more than $1.6 billion (equivalent to $3,240,000,000 in 2016) in reparations to 82,219 Japanese Americans who had been interned and their heirs.
Of 127,000 Japanese Americans living in the continental United States at the time of the Pearl Harbor attack, 112,000 resided on the West Coast. About 80,000 were nisei (literal translation: "second generation"; American-born Japanese with U.S. citizenship) and sansei ("third generation"; the children of Nisei). The rest were issei ("first generation") immigrants born in Japan who were ineligible for U.S. citizenship under U.S. law.
The internment of Japanese Americans has sometimes been compared to the persecutions, expulsions, and dislocations of other ethnic minorities in the context of World War II, in Europe and Asia. An estimated 500,000 Volga Germans were rounded up and deported to Siberia and Kazakhstan when Germany invaded the Soviet Union, with many of them dying en route. In 1942, nearly all the able-bodied German population was conscripted to the NKVD labor columns. About one-third did not survive the camps. The Volga Germans were deported prior to the Battle of Stalingrad, as they were regarded, in the "war hysteria of the moment", as a potential "Fifth Column".
In 1944, the Red Army rounded up about 500,000 Chechens and Ingushes for relocation; a third of this population perished in the first year, from starvation, cold, and disease. Other nationalities which faced ethnic cleansing for having been identified as potential collaborators with the Germans were the Balkars, Crimean Tatars, Karachi, Kalmyks, and Meskhetians.
--- ---
...

Three Good Reasons To Liquidate Our Empire (And Ten Steps to Take to D...