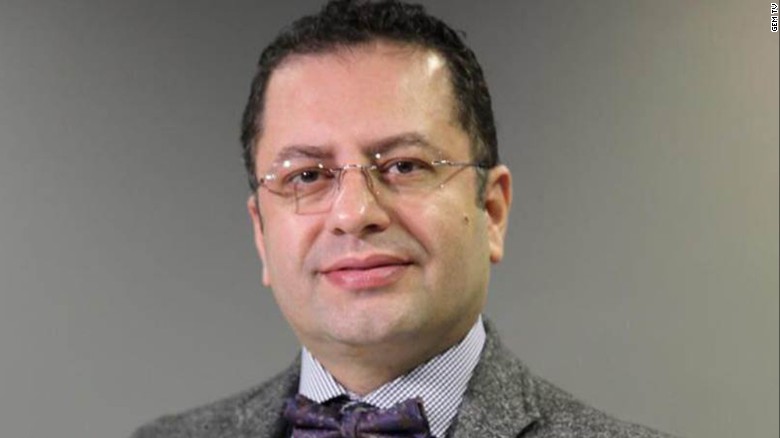 (CNN)A prominent Iranian TV executive and his Kuwaiti business partner were gunned down in the Turkish city of Istanbul late Saturday night.
The executive is Saeed Karimian, founder of GEM TV media group.
Karimian was recently sentenced in absentia to six years in jail in Iran for spreading anti-government propaganda against the Islamic Republic of Iran, according to a local publication linked to Iran's judicial system.
"He left work relatively early that night," Karimian's assistant, Lale Simsar told CNN. "He was taking his friend out for a night in the city."
Ambushed by masked gunmen
Karimian left his Istanbul office around 8p with his business partner.
Their car was cut off by a SUV and two masked gunmen opened fire on their vehicle, according to Dogan, a Turkish news agency. Karimian was found dead when emergency services arrived on the scene.
The incident took place in Istanbul's Maslak district.
The Kuwaiti -- whose name has not yet been released by authorities -- was transported to a hospital where he was later pronounced dead, according to Hurriyet, a Turkish newspaper. The SUV was found abandoned and burned out.
Police determined that the attacker had been following Karimian's daily routine coming and going to work before organizing Saturday night's attack, Hurriyet reports.
Initial reports suggest the murder was related to a money matter, Sukru Genc, mayor of Sariyer district where Karimian was killed, told Hurriyet.
Police in Turkey are investigating the killing, trying to determine a motive and hunting for the assailants.
'Great media man of Iran'
GEM TV announced Karimian's death on Sunday in a news broadcast and posted condolences on its Facebook page, calling Karimian, "the great media man of Iran."
"It is my dream to one day be alive and to witness a prosperous Iran," Karimian can be heard saying in an interview shared on a post on GEM TV's Facebook page.
GEM TV is a group of Persian-language entertainment satellite channels that Karimian founded in 2006.
Its offerings are popular among Iranians inside the country and around the world. It has TV channels in Farsi and other languages and produces movies and TV series. It dubs popular Turkish TV shows into Farsi.
GEM has come under scrutiny by the Iranian regime for airing programs considered inappropriate for Iranian audience and promoting Western ideals.
--- ---...