5 Things You Need To Know About E-Bikes| Information Revealed

A revolutionary design and concept in the bicycle market, the e-bike is a new development to bring bikes into this modern age with additional benefits that old fashion bikes simply could not offer. With so many different electronic bicycles available on the market, it’s not surprising to have some questions about what to expect. Here are the five things you need to know about e-bikes:
​Yes, the bikes may be electrical, but that doesn’t mean it fails to provide health benefits. E-bikes do not pedal themselves. Instead, they provide pedal-assist. Pedal assist is also known as pedelec, essentially, the E-bike will only provide power when you pedal - therefore improving overall fitness and aerobic capacity as it requires you to ‘work for it.' (Please note that pedal-assist comes in varying levels, low, medium, and high. For those who are more health conscious, low pedal assist provides little electrical power allowing a better workout. On the other hand, for those days when you’re feeling a little lack-luster, high pedal assist requires very minimal effort, and it’s likely you won’t even break a sweat).
Evidently, cars are much faster than bikes. With the average car speed easing in at 18 mph, e- bicycles are not far behind as they reach an average of 15 mph - of course, cars can reach much higher speeds than a mere 18 mph. However, electric bikes uphold one major advantage over cars; they can avoid congestion completely by traveling off-road; changing a potential 40-minute ride into a 15-minute cycle.
​Unlike electric cars, which can only be charged at certain power stations, E-bikes can be plugged into any outlet, from any power source. Additionally, some E-bikes provide batteries which can be removed and recharged indoors, much more convenient than having to drive 20 minutes to reach the local power station. (It’s recommended to charge the battery for around 4 hours to reach maximum charge.)
​It seems that most people remain in a ‘gray area’ as to whether these bikes are road legal or not. With electronic bikes still being relatively new, the confusion is understandable. Within California state law, E-bikes are perfectly legal as they are pedal driven and under the max speed of 20 mph. Most areas within America accept CA law as standard in the absence of such laws. However, if you are unsure, there is no harm in checking with the local police officers.
​Finally, the initial investment of an electric folder may seem expensive (around $1,000). But, consider the long-term cost-saving potential; Electric bikes require less maintenance than cars, not to mention the money you will save in paying for gas. Alongside the environmental benefits E-bikes have over cars, producing no CO2 emissions, those who are eco-conscious can ride 100% guilt free. Arguably the best the money-related benefit of an E-bike for those who live in the city, parking is free! Put into context, spending roughly $3.75 a day on parking five days a week would be a saving of $968 per year.
--- ---...

In The Streets Of Iran, A Fashion Shoot Bursting With Color | KQED Pub... kqed.org 17/11/2013 Culture
Iran is a notoriously closed society, so this was an unusual milestone: It was recently the setting for a high-fashion magazine shoot, published in Ca...View Details» 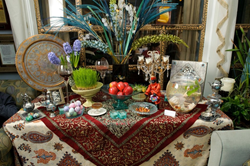