What Is a Persian Apple? 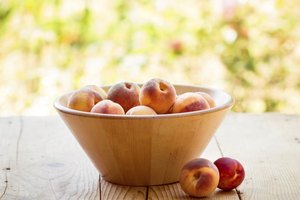 By Fred Decker
eHow Contributor
Foods are often known by multiple names, a reality that contributes much to both the fascination and frustration of cooking and baking. A few minutes' frantic searching on the Internet will readily tell you that the exotic "courgettes" in that British recipe are plain old zucchini, but some names are harder to track down or positively obscure. For example, you might occasionally find reference to a fruit called the "Persian apple." You can earn tremendous trivia-champ credibility by knowing that it's simply a peach.
What's in a Name?
The name is somewhat misleading, because peaches are not native to Iran. Rather, they're one of the many foods that were introduced to the Western world by traders from that country. At various times, the Persian Empire has spanned most of the distance between the Middle East at one end and India and China at the other, and its traders grew wealthy acting as middlemen between those cultures. When their merchants first brought peaches from their native China, around the year 300 BCE, the novel fruit was labeled "Persian apple" -- Prunus persicus -- which remains its botanical name to this day.