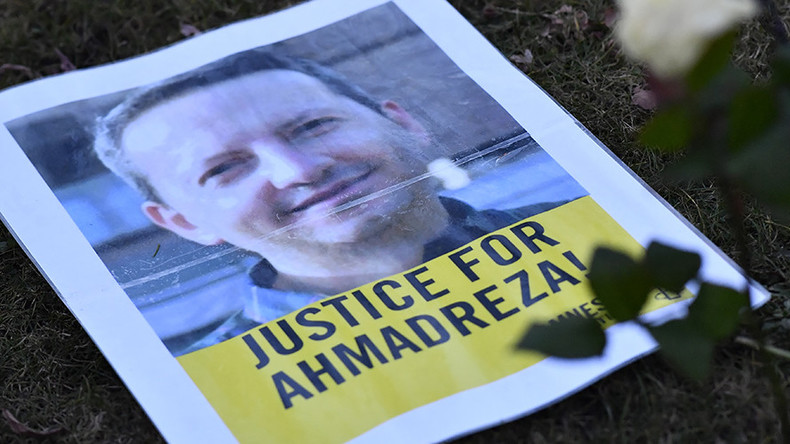 An alleged spy for Israel’s Mossad intelligence service has been sentenced to death in Iran after he was found guilty of being involved in a string of assassinations of Iran’s nuclear scientists, according to prosecutors in Tehran.
FILE PHOTO: A photo taken on February 13, 2017 shows a flyer during a protest outside the Iranian embassy in Brussels for Ahmadreza Djalali © Dirk Waem / Belga / AFP

* * * “One of the crimes of the convict has been disclosing the address and some details of 30 important figures involved in (the country's) research, military and nuclear projects, including (Iranian nuclear scientists) martyrs, Shahriari and Ali- Mohammadi, to Mossad intelligence officers which led to their assassination and martyrdom,” Tehran prosecutor Abbas Jafari Dolatabadi said, as cited by a judiciary news website Tuesday under the caption “An execution of Mossad agent.”
Over the last decade, at least four senior nuclear researchers had been killed in Iran, including Masoud Ali-Mohammadi, Majid Shahriari, Dariush Rezaei Nejad and Mostafa Ahmadi Roshan.
According to the prosecution, the suspect confessed that he had “several meetings” with a number of Mossad officers and passed on “sensitive information” about dozens of Iranian military and nuclear scientists and sites in return for money and help in securing a residency permit in Sweden, Reuters reports.
Although the name of the accused was not disclosed Monday, Amnesty International (AI) called on the Iranian authorities to release and abrogate the penalty for an Iranian-born Stockholm resident, Ahmadreza Djalali.
The specialist in emergency medicine was sentenced after “a grossly unfair trial that once again exposes not only the Iranian authorities’ steadfast commitment to use of the death penalty but their utter contempt for the rule of law,” said Philip Luther, AI’s Research and Advocacy Director for the Middle East and North Africa.
The rights group insists “no evidence has ever been presented to show that he is anything other than an academic peacefully pursuing his profession.”
The Iranian-born man was captured in the spring of 2016 during an academic visit to the Iranian capital. He was arrested on suspicion of collaborating with a “hostile” government.
The judicial process, led by a judge Abolqasem Salavati in a revolutionary court, delivered the sentence on October 21 and gave the alleged Mossad agent 20 days to appeal, The Nature journal reports citing Djalali’s wife Vida Mehrannia.
Djalali worked on improving hospital’s emergency responses to armed terrorism and radiological, chemical and biological threats in the world’s largest medical universities, the Karolinska Institute in Stockholm, as well as in the University of Eastern Piedmont in Italy, according to the publication.
Djalali has denied guilt, claiming he was forced to read out pre-written confessions in front of a camera following psychological pressure and threats, as well as physical torture. He added that the intelligence ministry fabricated the accusations against him, AI reports citing a voice recording of Djalali published on YouTube.
According to another statement, said to be a literal transcription of the academic’s handwritten text shared by a close contact in 2014, Djalali was allegedly courted to spy on European countries for Iran, but refused.
“I have never acted against my country, I have never spied for Israel or any other country. My only fault is that I did not accept to use the trust of my colleagues and universities in EU to spy for Iran's intelligence services,” the researcher allegedly wrote.
--- ---
...