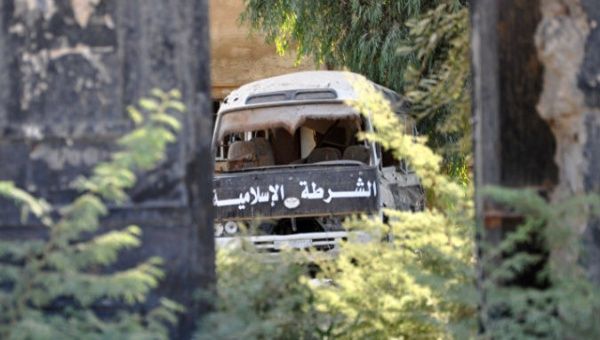 
“We have encountered a huge arsenal of advanced U.S., British and Belgian weaponry,” said Syrian General Hasan Suhel.
The Syrian Armed Forces have discovered a large cache of military arsenal from Western countries, particularly from the United States, left behind by the Islamic State group as its forces fled the city of al-Mayadin in the east of the country, according to Sputnik.
“We have encountered a huge arsenal of advanced U.S., British and Belgian weaponry,” said Hasan Suhel, the Syrian general who led the military operation to liberate al-Mayadin.
The arsenal included rifles, anti-tank weaponry, projectiles, artillery, armored vehicles, tanks, satellite communication systems, radars, medical equipment and a garage with several functional drones. Syrian forces also found a 115 mm howitzer manufactured in the U.K., according to Sexenio, with a large portion of the armament constituting weapons and weapon systems used by NATO.
“We'll need at least six days to remove all of these trophies (the Islamic State group) left here while fleeing,” Suhel indicated.
Syrian forces, coupled with Russian air support, were able to regain control of al-Mayadin from the Islamic State group on Oct. 14. Until then, it had been used as an organizational and logistic center, complete with an arms depot, for the terrorist group. The town is located 40 kilometers southeast of the capital Deir Ezzor.
According to Syrian and Russian officials, Syria has been able to reclaim 95 percent of its national territory. Speaking at a conference in the Philippines, Russian Defense Minister Sergey Shoigu stated that terrorist groups used to occupy over 70 percent of Syria prior to the Russian military launching an aerial campaign in support of Damascus in 2015, according to PressTV.
Meanwhile, one of several Syrian news sources has reported that 14 civilians were killed and over 30 injured during air strikes conducted by U.S.-led coalition warplanes flying above the Al-Qusor neighborhood in Dayr Zawr city.
--- ---
...