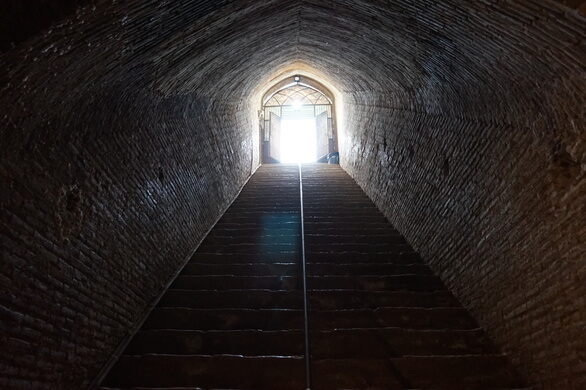 A 1,500-year-old, 3-story subterranean city where ancient Persians took refuge in times of war.
Just north of Kashan, in the small town of Nushabad, Iran (also spelled Noosh Abad), lies a sprawling underground city. Despite its impressive scale, the ancient buried shelter was completely unknown until a decade ago, when an oblivious resident stumbled upon a tunnel while digging a sewage ditch in his home.
What was discovered was an extensive, 1,500-year-old underground city, set between 3 to 18 meters (10 to 60 feet) deep. The labyrinthian network was comprised of three stories of tunnels, chambers, air ducts, staircases, canals, and booby traps. It’s considered a marvel of ancient architecture and engineering.
Construction of this man-made subterranean city, called Ouee (or Ouyi), dates back to the Sasanian (or Neo-Persian) Empire that ruled from 224 to 651. Inhabitants would dig underground chambers as hideout spots for women, children, and the elderly in the event of an attack by foreign invaders.
Over the years, the individual chambers were amalgamated, and air ducts, water pipes, storage spaces, and toilets were all built—creating a sustainable underground city that was used as a refuge during times of war. Each family had their own room of sorts, with a tunnel running down the length of these rooms, similar to a hotel hallway.
Know Before You Go
Parts of the underground city are open to tourists year round. From Kashan, you will need to take a cab and simply ask the driver to take you to the underground city.

Iran’s tourism booming despite US sanctions...