Iranians Are Outraged Over Shoddy Construction in Earthquake Zone 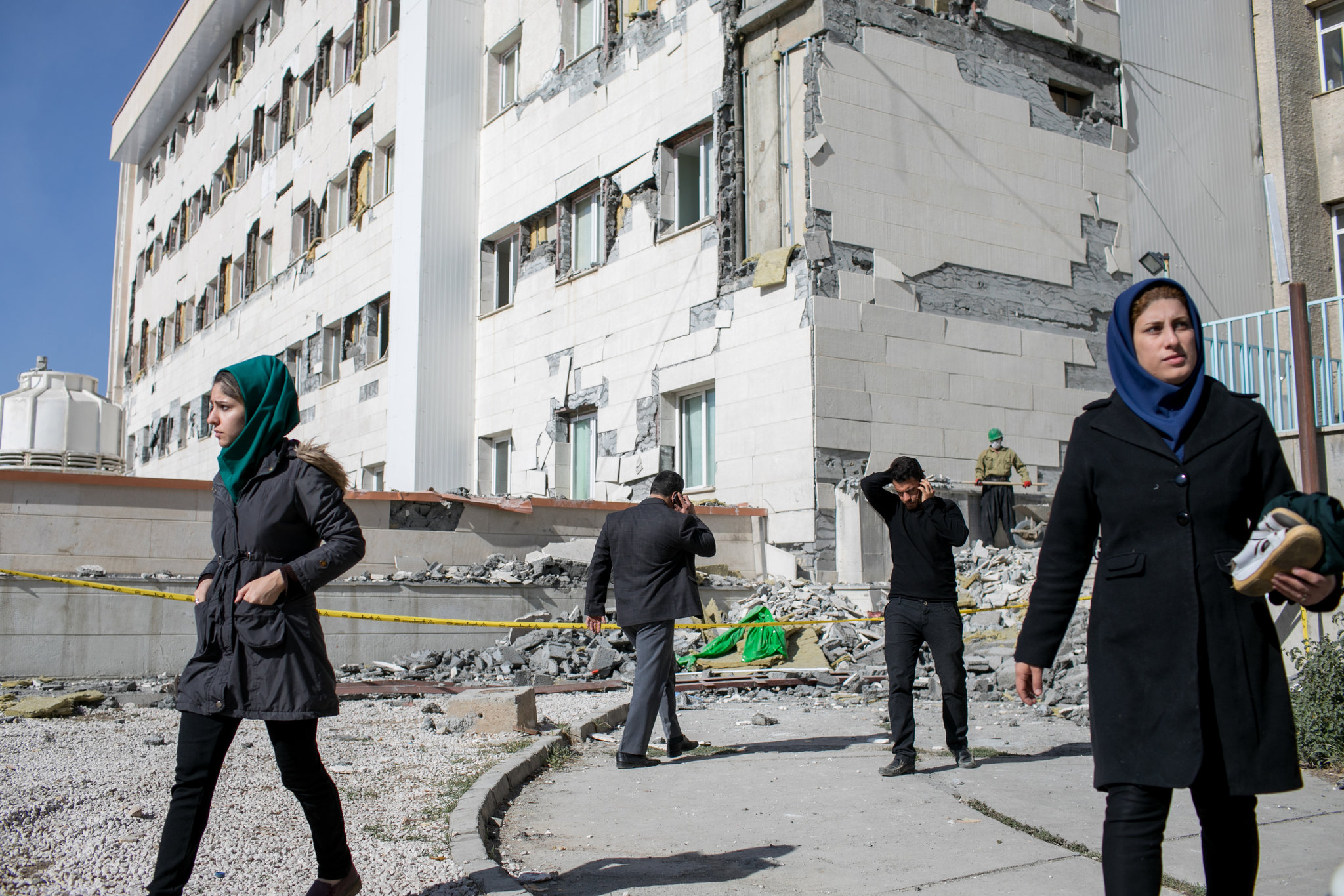 By THOMAS ERDBRINKNOV. 15, 2017
ESLAMABAD, Iran — The opening of the new wing of the Imam Khomeini hospital last year was a big deal in this provincial Iranian town. The health minister cut a red ribbon, and V.I.P. guests smiled as state television recorded the entire event.
The newly constructed wing of the Imam Khomeini hospital in Eslamabad, Iran, partly crumpled during Sunday’s earthquake. The original building, 40 years old, was relatively unscathed. Credit Arash Khamooshi for The New York Times

* * * More than 100 beds were added in a $15 million construction project that had taken more than eight years to complete and had made the hospital the largest in the region. “We were so proud,” said Reza Naderi, one of the managers.
But during the 30-second earthquake on Sunday, the new wing partly crumpled like an empty soft-drink can in the hands of a child. The original hospital building, 40 years old, stood beside the wreckage, barely damaged.
The magnitude 7.3 earthquake killed more than 500 people in Iran and eight in neighboring Iraq. More than 40,000 properties became uninhabitable, officials say, including many newly built state hospitals, schools, apartment complexes and even army barracks. It is unclear how many people died in collapsed government buildings.
The earthquake has laid bare what many Iranians have been saying for a long time: Corruption inside state organizations has led to shoddy construction work and undermined Iran’s infrastructure.
Continue reading the main story
Building permits can be bought, developers are allowed to economize on safety regulations and some quality-control inspectors make more of their living from bribes than salaries, insiders say. 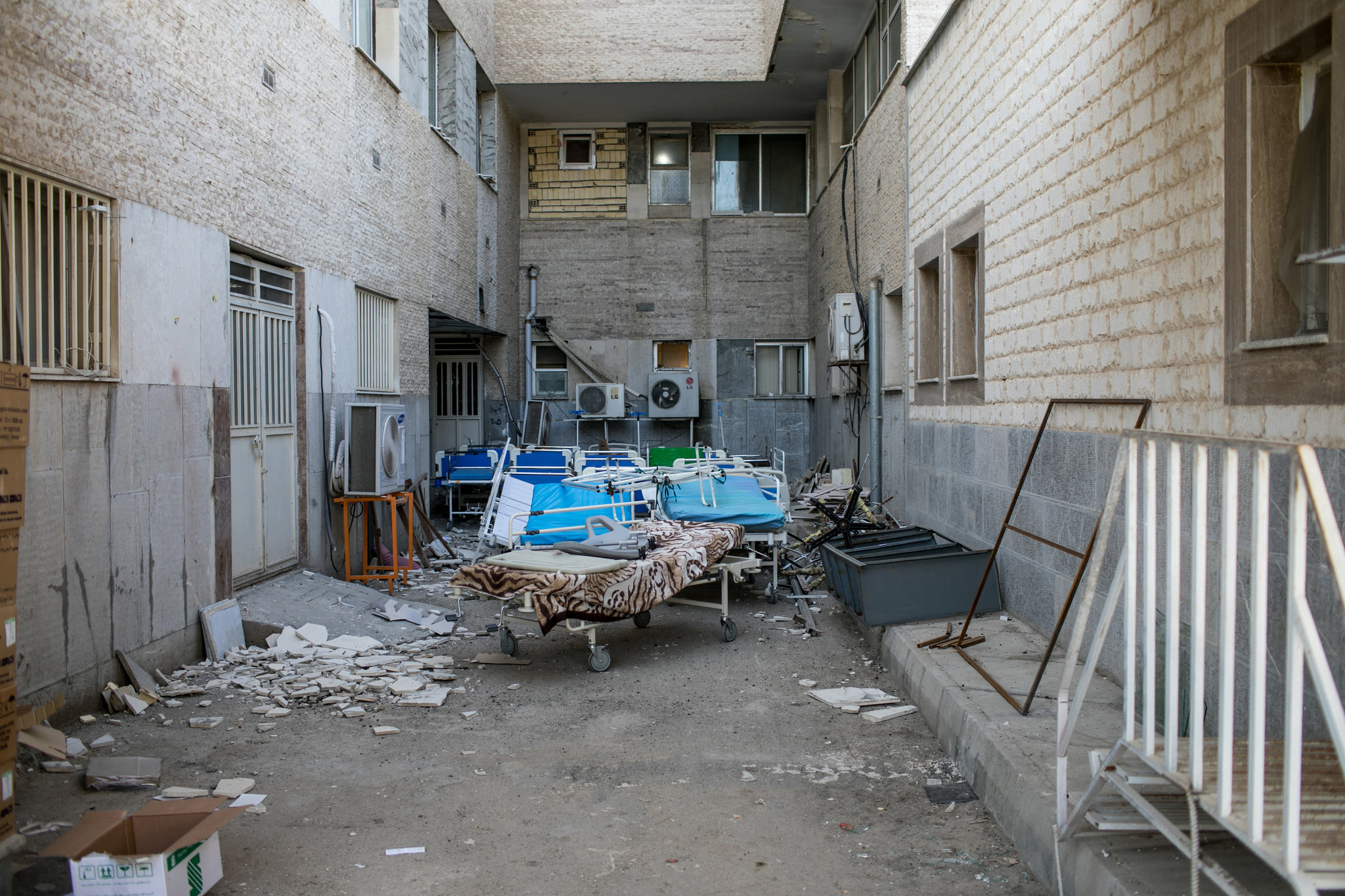 The earthquake has laid bare what many in Iran have been saying for a long time: growing corruption inside state organizations is undermining the country’s infrastructure. Credit Arash Khamooshi for The New York Times

* * * One outcome has been a sharp increase in industrial accidents in recent years. Dozens of gas transportation pipes have exploded and several refineries have caught fire.
This year, a poorly maintained high-rise building in the center of Tehran burned and collapsed, leaving 20 firefighters dead. Home to dozens of textile shops and storage spaces, the building did not have a sprinkler system. A government report concluded that the religious foundation that owned the building had not done proper upkeep and that government agencies had failed to enforce 22 national building regulations. No one was punished.
President Hassan Rouhani on Tuesday visited Sarpol-e Zahab, one of the cities hit worst by the earthquake. In front of rows of partly collapsed apartment buildings for the poor, built under his predecessor and political rival, Mahmoud Ahmadinejad, Mr. Rouhani called for an investigation into the quality of government construction projects.
Standing through the sunroof of his car, surrounded by angry local residents, Mr. Rouhani also talked about the Imam Khomeini hospital, where the old and the new had stood side by side before the tremor struck.
“Look, there are two buildings: One of the buildings, which was constructed by government contractors, and you can see the other building built by people, by individuals, and they still stand,” he said. “We should find the culprits and people are waiting for us to introduce the culprits. We will do that, we will do that.”
Housing and other projects for the disadvantaged have been built nationwide and represent just a fraction of construction involving the state. Outside Tehran, in the city of Boomehen, around 40 high rises have been erected on the flanks of a mountain, vexed by all sorts of construction issues. Analysts say the root problem is widespread corruption. 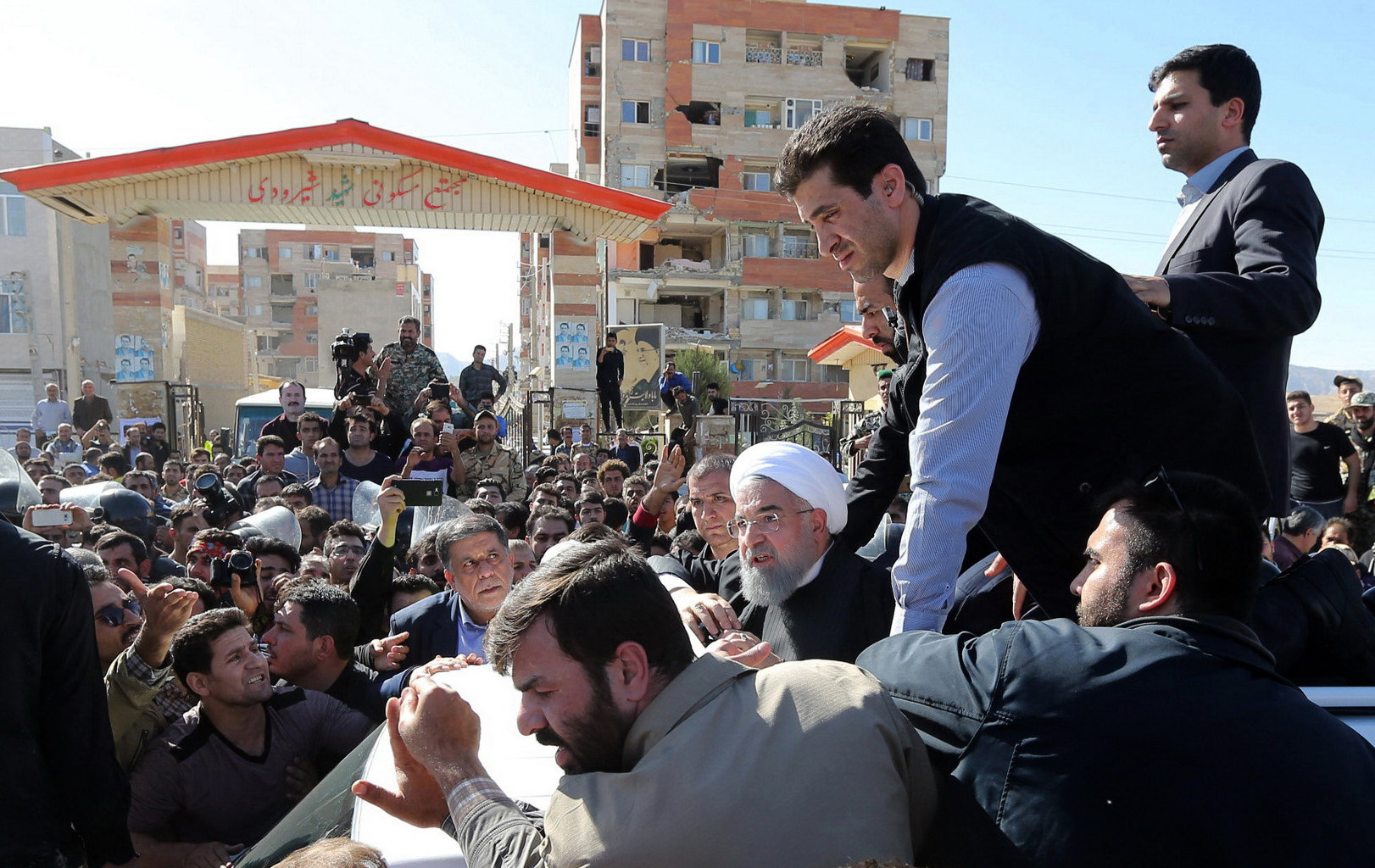 Visiting Sarpol-e Zahab, one of the cities worst hit by the earthquake, President Hassan Rouhani of Iran called for an investigation into the quality of government construction projects. Credit Iranian Presidency, via Agence France-Presse — Getty Images

* * * “State institutions tasked with fighting corruption are themselves corrupted,” said Saeed Laylaz, an economist who supports Mr. Rouhani’s government. “There is no short-term remedy.”
Advertisement
Continue reading the main story
He also pointed out how the government had systematically not paid contractors for their jobs, instead giving them i.o.u.’s that quickly lost half their worth. “Naturally next time they get a job they try to cheat wherever they can,” Mr. Laylaz said.
Twenty-three people died on Sunday in Eslamabad, a tree-lined town on the road to the border with Iraq, but perhaps by miracle none of the victims had been inside the ruined wing of the hospital. Elevators stuck, ceilings collapsed, floors jumped like springboards. The 126 patients, some in intensive care, howled and screamed, said Mohammad Fardin Ghanbari, a hospital clerk. “It was hell.”
The hospital’s director, Ahmadreza Biglari, was home when his ceiling swayed and his cupboards started dancing. When the earthquake ended he called the hospital and learned the disastrous news: “The new wing was severely damaged.”
There was nothing the staff could do but to evacuate bedridden patients. “Just as we were done, hundreds of wounded from nearby towns affected by the quake arrived,” he said.
Mr. Biglari stood outside the five floors of the new wing, now partly crumpled and riddled with cracks and holes. Construction workers were cleaning up what was left of the fragmented tile facade. The Islamic Revolutionary Guards Corps had set up a huge field hospital on the grounds. Mr. Biglari was upset. 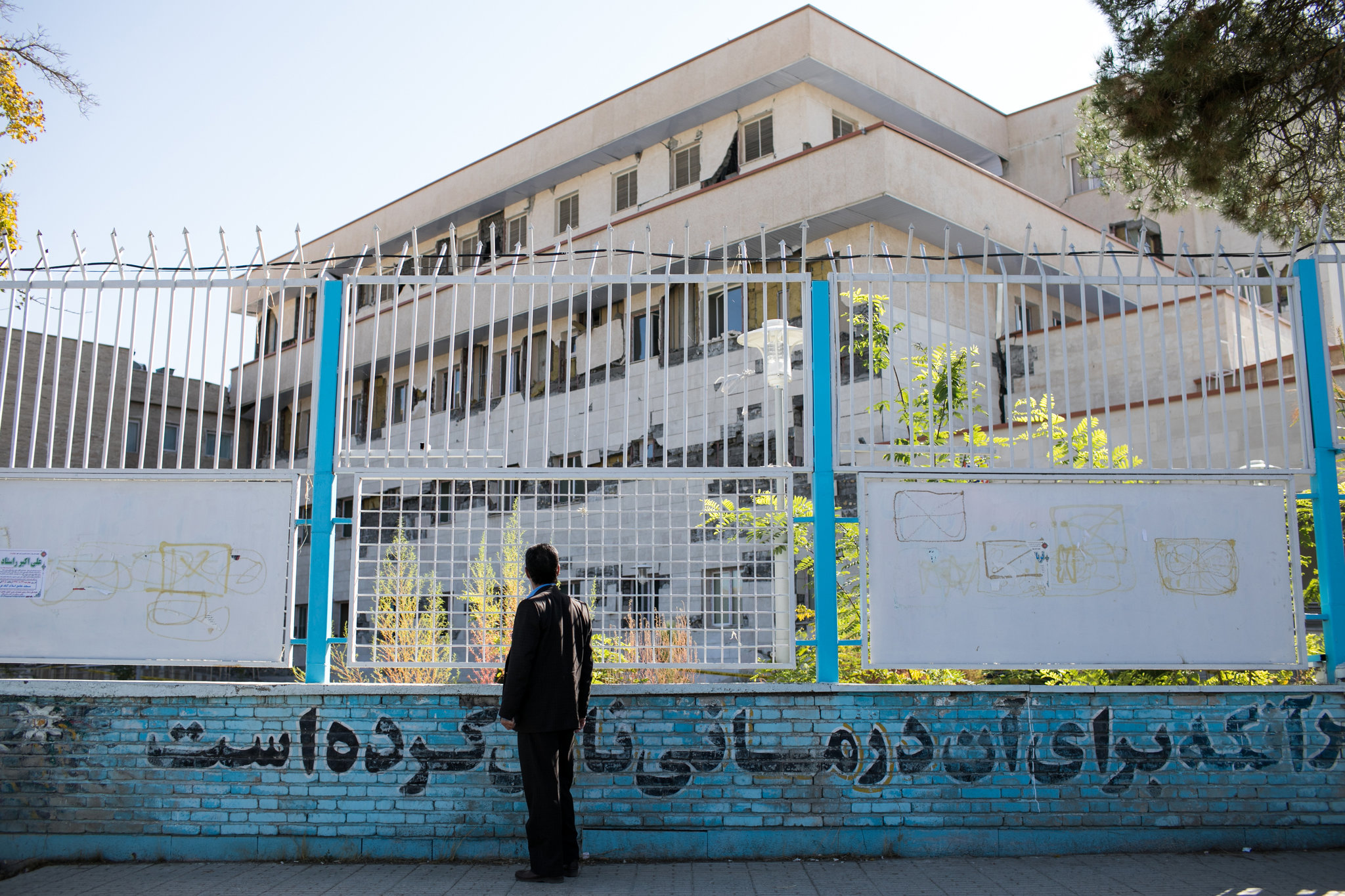 Twenty-three people died in Eslamabad in Sunday’s earthquake, but to the relief of health officials, no one died when a new wing of the Imam Khomeini hospital collapsed. Credit Arash Khamooshi for The New York Times

* * * “The experts came yesterday and did an assessment,” he said, pointing at the wreckage. “If the old building hadn’t stood next to it, supporting the structure, the new wing would have collapsed. It needs to be demolished.”
Some hospital employees said the engineer responsible for the construction had been arrested, but Mr. Biglari did not want to confirm that. “There will be a court case for sure,” he said.
The building had been constructed by a unit of the Housing Ministry, said Mr. Ghanbari, the clerk. He shook his head.
Advertisement
Continue reading the main story
“It’s unimaginable,” he said. “There is a massive earthquake, and this the one place that should be safe. How can they let this happen?”
In signs of growing criticism against not only the shoddy building but also the speed of aid efforts, a local member of Parliament spoke out in an angry interview with the semiofficial news agency ILNA.
The parliament member, Ahmad Safari, from Kermanshah Province in western Iran, said he believed the number of dead may be roughly double the the official toll.
“In my opinion, more than 1,000 people lost their lives,” Mr. Safari was quoted by ILNA as saying. “Seventy people were killed only in one street in Sarpol-e-Zahab. More than 250 people were killed in the Mehr apartments,” he said, referring to badly built housing complexes for the poor.
Mr. Safari also criticized what he called the lack of relief supplies for the victims. “Unfortunately, aid has not yet been distributed to all villages, perhaps only 10 percent of the villages have tents,” he was quoted as saying.
Follow Thomas Erdbrink on Twitter: @ThomasErdbrink.

Iran Must Celebrate Its Heritage ...

nytimes.com 10/02/2014 Culture
By CAMELIA ENTEKHABIFARDFEB. 10, 2014 Last March, I sublet my Manhattan apartment. A woman called Shireen answered my ad, and when she came to visit I...View Details»