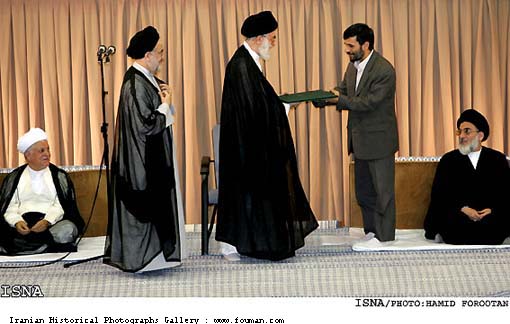 Relatives of former president say his body had high radiation levels and they doubt the official finding of cardiac arrest
Saeed Kamali Dehghan Iran correspondent
Tue 9 Jan ‘18 17.03 GMT
Iran has reopened an investigation into the death of its former president Ali Akbar Hashemi Rafsanjani, according to members of his family who say his body had unusually high radiation levels.
Ali Akbar Hashemi Rafsanjani served as president of Iran for two terms until 1997.

* * * Tuesday marked one year in the Persian calendar since the sudden death of the pragmatist ayatollah, who served as president for two consecutive terms until 1997.
Rafsanjani’s daughter Faezeh Hashemi revealed last month that an examination led by the country’s supreme national security council had determined that the level of radioactivity in her father’s body was 10 times what is considered permissible.
The cleric’s son Yaser Hashemi said this week that the current president, Hassan Rouhani, a close ally of Rafsanjani, had ordered the council to reopen the investigation.
A family member who wished to remain anonymous told the Guardian: “The consensus within the family is that the he was killed, or at least did not die of natural causes.”
Newspapers in Tehran commemorated the anniversary on Tuesday by publishing tributes alongside large images of Rafsanjani on front pages. “He was our voice,” said the headline of Etemaad, a reformist daily. “One year without the ayatollah,” said the Ebtekar daily.
The official account of Rafsanjani’s death blamed cardiac arrest. The Guardian understands that the family was not put under pressure to forego a postmortem before his burial, but decided not to opt for one as they did not want to desecrate the body and wanted bury him as soon as possible, in accordance with Islamic tradition.
But the family has since cast doubts over the cardiac arrest finding. “There was a meeting between all the family members and some members of the supreme national security council and it was announced to us that our father’s body had 10 times the permissible radioactivity,” Faezeh Hashemi told Etemaad in December.
The Guardian understands that a blood sample was taken from Rafsanjani’s body in hospital after his death, at the request of his nephew. That sample is missing under mysterious circumstances. The radioactivity level was determined after examining a catheter tube that was connected to the body. It is not clear whether the blood sample would have given a different result.
“He [Rafsanjani] had a meeting scheduled for 8pm that evening with a senior Revolutionary Guard. There are signs prior to his death that people had warned him about his safety,” the family source said.
Rafsanjani’s body was found by one of his bodyguards in a swimming pool in Koushk Garden, a complex used by senior officials. The ayatollah used the facilities for swimming once or twice a week. He swam alone that day while guards stayed outside, the source said. One guard found the body after Rafsanjani failed to come out at the usual time. The family member said the guards had provided conflicting accounts.
Samples have been taken from all family members including grandchildren to compare Rafsanjani’s radioactivity levels with theirs. Rafsanjani’s other daughter, Fatemeh, and his wife also had higher radioactivity levels than usual.
It is not clear whether the level found in Rafanjani’s catheter was enough to kill him, as little is known about the type of the radioisotope, its lifetime and other heath factors.
Rafsanjani’s death deprived moderates of a key powerbroker who retained significant influence in Iran’s political system despite his views becoming steadily less hardline in recent years. The ayatollah was one of Iran’s great political survivors, and could have played a key role in the appointment of the next supreme leader in the event of a vacancy.
Rafsanjani’s family have faced restrictions on their movements since his death. Some, including Faezeh Hashemi, who has been jailed in the past, have been barred from leaving the country. The family has complained that some of Rafsanjani’s documents were taken from his office.
--- ---...

Iranian women and sport: every obstacle an opportunity | World news | ... theguardian.com 20/04/2015 Sports
Women have not been sitting idle while waiting to be allowed into the stadium. Athletics no longer just a form of leisure, but increasingly competitiv...View Details»