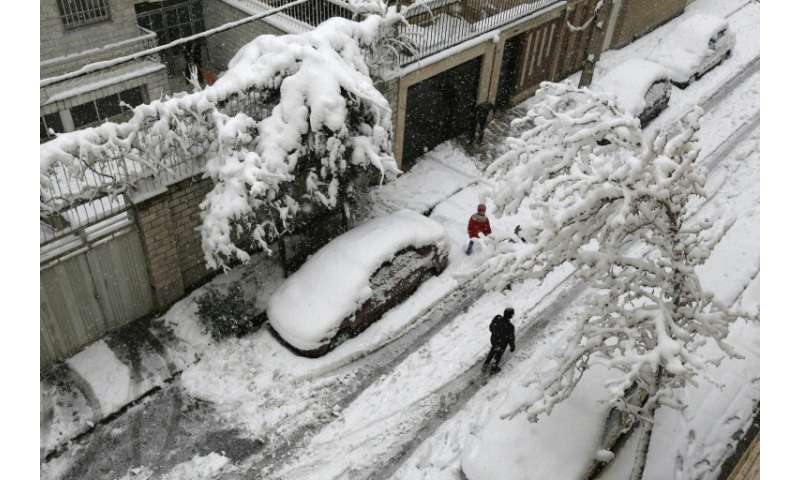 
After months of waiting for the snow to arrive, Tehranis were hit by massive snowfall overnight on Sunday that shut airports and schools but delighted the ski community.
Iranians walk in the snow in the capital Tehran on January 28, 2018

* * * The capital's Imam Khomeini International and Mehrabad airports were shut due to poor visibility "until further notice", state television said.
Some 20 provinces in the west and north of Iran were affected by the snowfall that began on Thursday and peaked on Saturday night, with some mountainous areas receiving as much 1.3 metres (more than four feet) of snow according to official news agency IRNA.
With many schools closed and offices delaying their opening times, Tehrani families made the most of the blizzard.
"This past year we have had very bad news and this is the first good news we have had, and we are happy," Hadi, a transportation worker who had taken the day off to make snowmen with his children, told AFP.
Iran's skiiers, who have been denied much action in recent months due to an uncommonly warm winter, were also pleased.
"It's incredible. There's been a metre of powder today, and it's still snowing. My car is buried up to its side mirror," said a Western diplomat, waiting for the lifts to open at Dizin ski resort, an hour north of the capital. 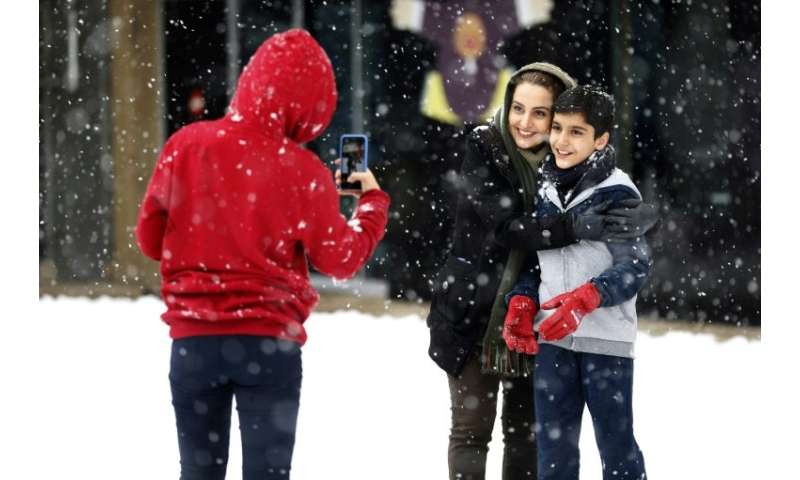 An Iranian woman and a child pose for a photograph during a snowstorm in the capital Tehran on January 28, 2018

* * * Iran's drivers were having less fun, with thousands blocked on motorways out of the capital.
Mohammad Ali Abtahi, who served as cabinet chief under ex-president Mohammad Khatami, posted a message on social media showing his car stuck on the motorway to the religious centre of Qom, around 150 kilometres south of the capital.
"It's been nine hours that we are stuck out here with hundreds of other cars. We haven't budged one metre," he wrote.
Hundreds of Red Crescent teams were mobilised to bring help to the stranded motorists, with many having run out of petrol after hours of keeping their cars heated.
A Red Crescent spokesman told the official IRNA news agency that 6,600 people had been put up in emergency accommodation.
The state gas company said it was bracing for a major surge in demand as temperatures were set to drop to minus-20 Celsius (minus-4 Fahrenheit) in certain northern regions.
In Tehran, local media said several cars and electricity cables had been damaged when trees collapsed on to cars under the weight of the snow.
Mayor Mohammad Ali Najafi asked young Tehranis to help municipality workers to shake trees and dislodge the snow in order to avoid further accidents.
---After months of waiting for the snow to arrive, Tehranis were hit by massive snowfall overnight on Sunday that shut airports and schools but delighted the ski community. ---
...