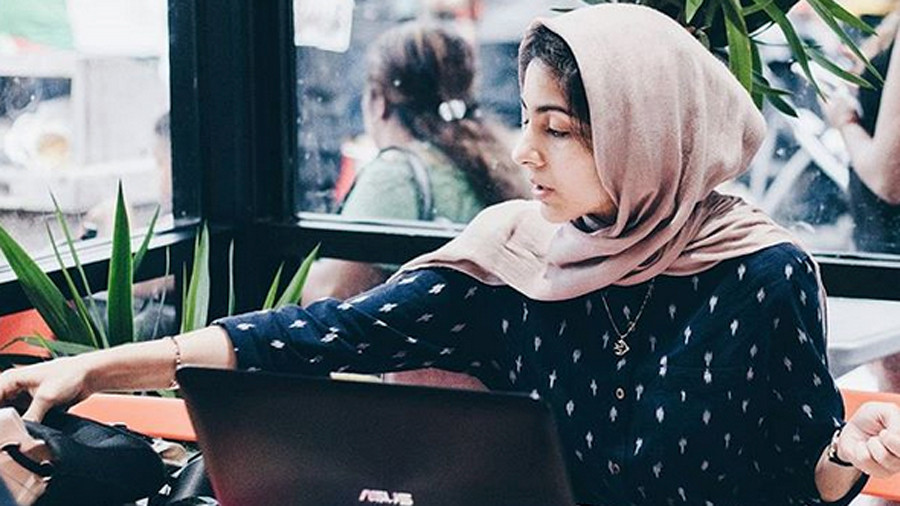 An Iranian-American fashion blogger was told on US television that she didn’t “sound like an American” after slamming Washington’s Middle East policy when the morning show hosts decided to grill her on Iran’s nuclear weapons.
Hoda Katebi, a popular 23-year-old Muslim fashion blogger, was invited onto Chicago’s WGN News live morning show to speak about her book, ‘Tehran Streetstyle.’ But after a brief discussion on Katebi’s childhood in Oklahoma and her traumatic experience of wearing the hijab to school in a predominantly white US state, one of the presenters, Larry Potash, suddenly dropped a bombshell: “Let’s talk about nuclear weapons. Some of our viewers may say we cannot trust Iran. What are your thoughts?”
Katebi, who seemed to be taken aback by the sharp transition from fashion to geopolitics, calmly responded: “I don’t think we can trust this country [the US]. I mean, what has this country done to the majority of countries in the Middle East?” she asked rhetorically.
“When we look at the legacy of imperialism and colonization in the Middle East and we see the legacy of this country and all of the violence that it has not only created but also created the capacity for, a lot of these weapons in the Middle East are completely brought in by the Unites States.”
Katebi’s response prompted the other presenter, three-time Emmy Award winner Robin Baumgarten, to tell the well-informed Muslim woman: “A lot of Americans might take offence to that. You’re an American, you don’t sound like an American when you say [this]… you know what I mean.”
“That’s because I’ve read!” Katebi, who studied international relations and Middle Eastern politics at University of Chicago, replied, laughing out loud.
“And I think it's really important that we look beyond these simple narratives that we’re told, whether it’s about Muslim women or about the legacy of this country, knowing that this country literally was built on the backs of black slaves and after the genocide of indigenous people. And I think that there’s a lot we can be proud about, but we can’t let that blindside us to the reality of these situations.”
She later published a short analysis of the interview on her JooJoo Azad blog. “Clearly, this is not the interview they expected,” she wrote. “Identifying me as an Iranian-American, just moments before they wanted me to swiftly and unquestionably denounce Iran and then am immediately called out for not blindly pledging to the USA.
“Of course, both countries deserve their questioning, but the double standards is mind-blowing. Not to mention that what, then, must an American ‘sound like?’ Are they saying that Americans must not question their government, must see the world in black & white, and chose simplicity over nuanced understandings? In that case, you all are doing it right,” Katebi added.
2/ WGN just called and Robin, the female anchor, sincerely apologized. (I also didn't realize so many of you called in! Like I said, ya'll on top of this -- thank *you* for making this happen and refusing to normalize this)! I accepted, and proposed a few ways to fix this --
— Hoda Katebi (@hodakatebi) 14 февраля 2018 г.
“But furthermore, what an incredibly loaded statement to say to a visibly Muslim woman on live TV, pushing every stereotype of "other," "foreign," and "incompatible with America" that Muslims are so systematically characterized as - and therefore used as justification to commit violence against, both here and abroad. If a white person said the same things as I did I guarantee you their ‘American-ness’ would not have been questioned,” she concluded.
She said that one of the anchors, the award-winning Baumgarten, later called her and apologized.
“The apology was important, but it's also important to be able to use this moment as a teaching tool, and prevent it from happening again. Let's raise the bar,” added Katebi.
--- ---
...

US airstrikes to support Iranian Revolutionary Guard's offensive in Ir...

rt.com 12/06/2014 Military
Iran deployed its Revolutionary Guard to help Iraq battle insurgents from a group inspired by Al-Qaeda, according to a recent report. In the meantime,...View Details»