The former Manchester United coach eased the Iranians through qualification but they now want tangible finals success, something that has always eluded Team Melli
John Duerden
Wed 21 Mar 2018 12.01 GMT
Last modified on Wed 21 Mar 2018 12.49 GMT
The only one of the dozen names on Fifa’s shortlist for 2017 men’s coach of the year not working in Europe was Tite, who ensured Brazil were the first qualifier for the 2018 World Cup. Iran were second but that was not enough for Carlos Queiroz, who has now led three different national teams to four World Cups. He may have to wait for success at the World Cup to turn eurocentric heads.
That means finishing above two of Portugal, Spain and Morocco in Russia to progress to the knockout stage at the fifth time of asking. If there is any Asian team that can manage that then it is Iran. For four years Team Melli have been the highest-ranked national side on the continent, for just a little less time they have been the best on the pitch, too.
In Brazil four years ago Queiroz, whose six years as number two at Manchester United in the previous decade was split by a season in charge of Real Madrid, had the team well-organised in a tough group containing Nigeria, Bosnia-Herzegovina and Argentina. A last-minute piece of Messi magic ended Iranian dreams of a first second-round appearance at the fourth attempt but Team Melli picked themselves off the floor. Now they are just as tight at the back but have more options going forward, younger overall but with more international experience.
Nine of the 23 who went to Brazil were based overseas but mainly spread around the Middle East and the second tiers of the big European leagues. The figure will be higher this time around, the leagues and performances are better and the players more active.
The winger Alireza Jahanbakhsh could mount a case – when he is not busy scoring and creating for AZ Alkmaar – to be the best player in the Netherlands this season. The £9m quoted a year ago in response to reported interest from Burnley, Watford and Bournemouth would be considerably higher now, especially with Napoli also monitoring him. The fleetfooted forward Reza Ghoochannejhad managed 19 goals for Heerenveen last season while the striker Karim Ansarifard has almost a goal a game for Olympiakos.
Sardar Azmoun is one of Asia’s biggest stars at 23, has already scored in the Champions League for Rubin Kazan and has been linked with Liverpool. Young midfielders Saeid Ezatolahi in Russia and Saman Ghoddos of Östersund are looking forward to making the next step up the European ladder and a successful World Cup can’t do any harm.
The improvement was there for all to see in qualification for this summer’s finals. Qualification for Brazil was in doubt until the final whistle of the final game which blew to bring relief, Iranian gestures and swear words at the rival bench and South Korean bottles flying down from the terraces. There was no such drama this time. The road to Russia was pleasantly boring – words that do not usually go together in this football crazy country. Qualification quickly became a foregone conclusion and was made official with two games to spare.
Iran did not lose and did not even concede until the 10th and final game. It was vindication for Queiroz who took the reins in 2011, months after guiding Portugal to the last 16 in South Africa. The 65-year-old not only has everything running exactly how he wants on the pitch, he can be busy off it too.
Whether due to his nature, Sir Alex Ferguson’s nurture or cold calculation – or a combination of all three – he likes to keep everyone on their toes by creating tension. In qualification for 2014 he quarrelled with rival coaches, but these days his ire is focused closer to home. There was a big fallout with Iran’s coach from the 2006 World Cup, Branko Ivankovic, now in charge of champions Persepolis, which led to Queiroz resigning amid accusations that the Iranian Football Federation (IFF) was not giving the support he needed.
Officials in Tehran can find it all a little bewildering but know that Queiroz brings success. At least two of the other four Asian qualifiers were curious as to whether last January’s resignation was genuine. It wasn’t.
He is also vocal when it comes to preparations, warning the federation to ensure that all that can be done is being done. Before Brazil four years ago international isolation made it difficult at times to arrange decent games. Sanctions also made it tough for the IFF to receive monies owed from abroad and so afford the overseas training camps that Queiroz wanted. Preparation for Russia has improved but there is still some way to go. Togo, Panama, Venezuela, Syria, Turkey, Tunisia and Sierra Leone present decent opposition but do not really compare to Brazil, Belgium, Italy, Germany and Colombia, who have been lined up by fellow Asian qualifiers Japan, South Korea, Saudi Arabia and Australia. No wonder Queiroz talks of these Asian powerhouses enjoying “World Cup credit cards” that provide automatic access.
Despite the tough draw, Iran are looking forward to this June and showing the world what they are made of. If all goes well, a host of talented players may get the chance to move to bigger clubs in bigger leagues, a ready-to-take-off domestic market with a large, young and passionate population may just get the spark and investment it needs, and Queiroz may just get the recognition he deserves.
--- ---
... 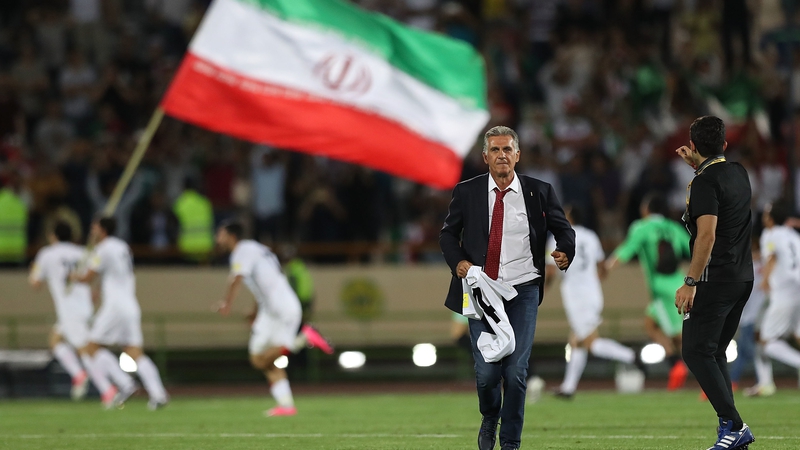