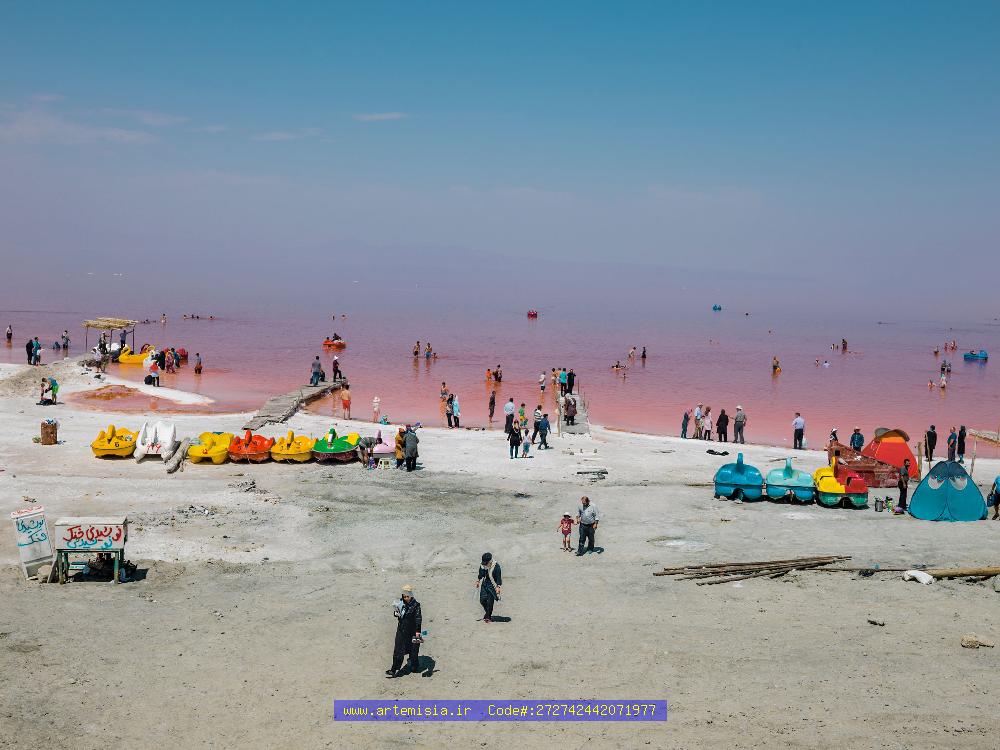 
By Kenneth R. Weiss
Photographs by Newsha Tavakolian
PUBLISHED April 3, 2018
Revered by ethnic Azeris as “the turquoise solitaire of Azerbaijan,” Lake Urmia was second only to the Caspian Sea as the largest saltwater lake in the Middle East, a haven for birds and bathers. Since the early 1970s nature and humanity have chipped away at this gem tucked in northwestern Iran, reducing its size by about 80 percent over the past 30 years. The flamingos that feasted on brine shrimp in this UNESCO biosphere reserve are mostly gone. So are the pelicans, the egrets, and the ducks. Even the tourists who flocked to Lake Urmia for therapeutic baths in its warm, hypersaline waters are staying away.
What remain are piers that lead nowhere, the rusting carcasses of ships half-buried in the silt, and white, barren landscapes of exposed salt flats. Winds that whip across the lake bed blow salt dust to farm fields, slowly rendering the soil infertile. Noxious, salt-tinged dust storms inflame the eyes, skin, and lungs of people as far away as Tabriz, a city of more than 1.5 million about 60 miles away. And in recent years Urmia’s alluring turquoise waters were stained blood-red from algae and bacteria that flourish in these waters, which are eight times as salty as the ocean, and then turn color when sunlight penetrates the shallows.
Summertime bathers wade into waters colored red by salt-loving bacteria and algae. Tourists from across Iran have come here for generations, but the number of visitors has fallen as the lake has shrunk some 80 percent since the 1980s, raising fears that this will be the last generation to play in its waters.

Women play in the red waters of what remains of Lake Urmia.

A group of retirees from the city of Tabriz wades in Lake Urmia’s salty water. As the lake dries, vacationers find fewer places to congregate.

Empty buildings and abandoned boats are all that remain at Rahmanlu Port. When the lake was full, cars queued up on the pier to load onto a ferry that cut hours off the drive time around the lake from the city of Tabriz to Urmia on the other side.

This cruise-boat wreck is a testament to the great days of the Bari tourist resort that was at the shores of Lake Urmia, near the city of Qushchi. After a few years of inactivity, the luxurious Bari tourist resort opened for business again, but despite providing new facilities that could compensate for the disappearance of Lake Urmia, such as a swimming pool, a billiard table, and a mini-zoo, tourists failed to materialize.

A family walks as the sun sets at Lake Urmia.

* * * What’s happened to this cherished lake? Climate change has intensified droughts and elevated hot summer temperatures that speed up evaporation, scientists say. Yet that’s only part of the story: Engineers and water experts point out that the lake in this semiarid region is suffering from thousands of illegal wells and a proliferation of dams and irrigation projects that are diverting water from tributary rivers to grow apples, wheat, and sunflowers. The experts have called on Iran’s government to change course before Urmia “falls victim to the Aral Sea syndrome,” the overexploitation of water that doomed its sister inland sea in Central Asia.
The voice of science seems to have reached Tehran. Iranian President Hassan Rouhani has pledged to spend five billion dollars to revive Urmia by releasing more water from dams, improving the efficiency of irrigation systems, and switching to less thirsty crops. Yet some promised funding appears to have dried up too, thwarting progress and bringing petitions to Iran's supreme leader, Ayatollah Ali Khamenei, to renew efforts or to seek international assistance. The United Nations Development Programme is working with farmers on more sustainable practices to save water. Although U.S.-Iran relations have been strained for decades, the countries have permitted scientific exchanges to brainstorm on how to replenish the diminishing waters of Lake Urmia and Utah’s Great Salt Lake—which are close in size and configuration.

Reza Manafzadeh works on a fruit-tree farm at the edge of the salt lake, where crops are irrigated by a new method—recycled factory water brought by tanker truck. “I’m so worried about my son’s future,” he says. “If there will be no water in Iran, our children will lose interest in their country.”

* * * At a meeting in 2016 sponsored by the National Academies of Sciences, Engineering, and Medicine in Irvine, California, U.S. and Iranian scientists shared strikingly similar stories about how Iran and the western United States have struggled with multiyear droughts and the demands of their growing populations and agriculture. It’s easy for public officials to shy away from responsibility by blaming a changing climate or the whims of weather. University of California, Irvine, engineering professor Amir AghaKouchak, who was born and educated in Iran before immigrating to California, said both regions have suffered extensive droughts in the past. The difference comes when human demands exceed available, renewable water. “If the same drought occurs in the future,” he said, “it will have even more severe impacts.”
---Lake Urmia was once a haven for birds and bathers. Now, its piers lead nowhere. What happened? ---
...