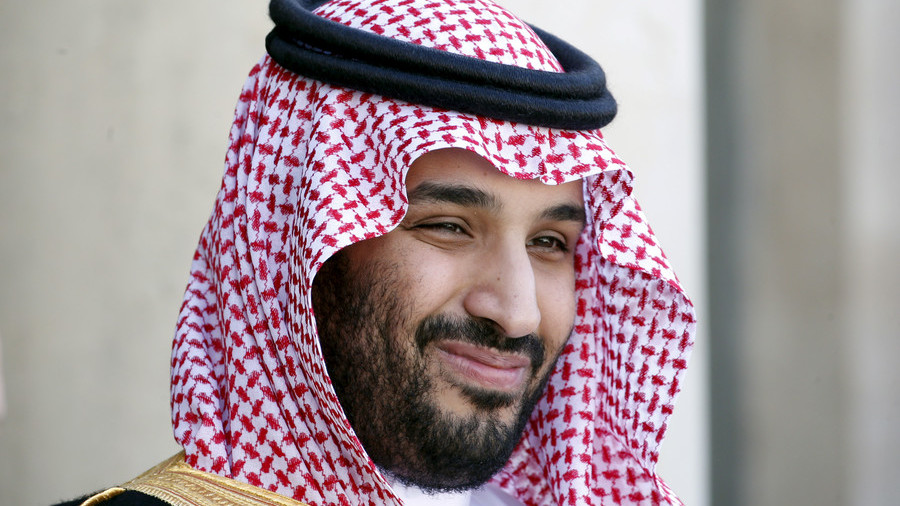 Seemingly discontent with just being the darling of the British establishment, Saudi Crown Prince Mohammed bin Salman (MbS) is on a charm offensive to win over the American public as well.
The crown prince must have figured the surefire way to impress the US political establishment was by glorifying Israel and demonizing Iran, judging by his wide-ranging puff interview with The Atlantic’s editor in chief, Jeffrey Goldberg, on Monday.
Channelling former President George W. Bush’s speechwriter, David Frum, MbS described his kingdom’s enemies as the “triangle of evil,” talking about Iran, the Muslim Brotherhood and Sunni terror groups like Al-Qaeda and Islamic State (IS, formerly ISIS/ISIL).
“I believe the Iranian supreme leader makes Hitler look good,” bin Salman told Goldberg, without any trace of irony ‒ or evidence. “Hitler didn’t do what the supreme leader is trying to do. Hitler tried to conquer Europe. … The supreme leader is trying to conquer the world.”
It was when speaking about Israel, however, that MbS brought out the big guns (though not the ones he bought from the US) in his charm offensive. According to Goldberg, MbS “did not have a bad word to say” about Israel.
To Goldberg’s question whether the Jewish people had the right to a nation-state in at least a part of present-day Israel, the crown prince replied: “I believe that each people, anywhere, has a right to live in their peaceful nation. I believe the Palestinians and the Israelis have the right to have their own land.”
Though the interview took place before the recent killing of 18 Palestinians by Israeli authorities, Goldberg speculated that the incident would not have changed the crown prince’s mind.
“My meeting with Prince Mohammed took place before the recent fatal violence on the Gaza-Israel border, but I do not believe that the crown prince would have moderated his views in light of these events,” Goldberg wrote. “The Saudis, like many Arab leaders, have tired of the Palestinians.”
Mind you, that is the assessment of the Atlantic editor, who is known as an outspoken Zionist and served in the Israeli military, rather than the Saudi crown prince. Filtering the subject through his personal prism is not a bug, but a feature of Goldberg interviews - such as the one with former President Barack Obama, published in March 2016.
“If Prince Mohammed actually achieves what he says he wants to achieve, the Middle East will be a changed place,” Goldberg tells the readers, describing how the crown prince was “jovial to the point of ebullience” when they met at a Saudi-owned compound outside Washington.
The crown prince’s handlers “frowned with concern when it seemed as if the prince was veering toward bluntness,” such as when the conversations turned to Saudi Arabia’s laws restricting the behavior of women.
“Before 1979 there were societal guardianship customs, but no guardianship laws in Saudi Arabia,” MbS said. “It doesn’t go back to the time of the Prophet Muhammad. In the 1960s women didn’t travel with male guardians. But it happens now, and we want to move on it and figure out a way to treat this that doesn’t harm families and doesn’t harm the culture.”
In Goldberg’s interpretation, 1979 was a “hinge year in Saudi history,” when the Iranian revolution and the Sunni extremists’ siege of the Grand Mosque in Mecca “caused a conservative backlash in the kingdom.” So you see, it’s the “triangle of evil” that’s really to blame for the position of Saudi women, not the progressive MbS!
Asked if he intends to do something about it, however, the crown prince replied: “There are a lot of conservative families in Saudi Arabia. There are a lot of families divided inside.”
What about the Saudi-led military intervention in Yemen that’s been going on since March 2015, at the cost of thousands of civilian lives?
“Saudi Arabia is trying to help the people of Yemen,” bin Salman said.
Freedom of speech? There are three lines one must not cross in Saudi Arabia. “You cannot defame Islam,” MbS said. The second is, one may criticize an institution but not the person, as a matter of Saudi culture. Thirdly, “anything that touches the national security, we cannot risk.”
“But other than that, people have the freedom to do whatever they want to do,” he added.
Goldberg explained that he won’t be asking the crown prince about corruption, “in part because it is a difficult-to-define concept in a country named for its ruling family, the expropriation of national wealth being a defining feature of absolute monarchies.”
For all of his professed admiration of modernity and globalization, bin Salman is a big fan of autocracy.
“If it were not for absolute monarchy, you wouldn’t have the United States,” he explained, pointing out the support for the American founders from the French King Louis XVI.
--- ---
...