As Oscars Pile Up, Iranian Film Grows Up 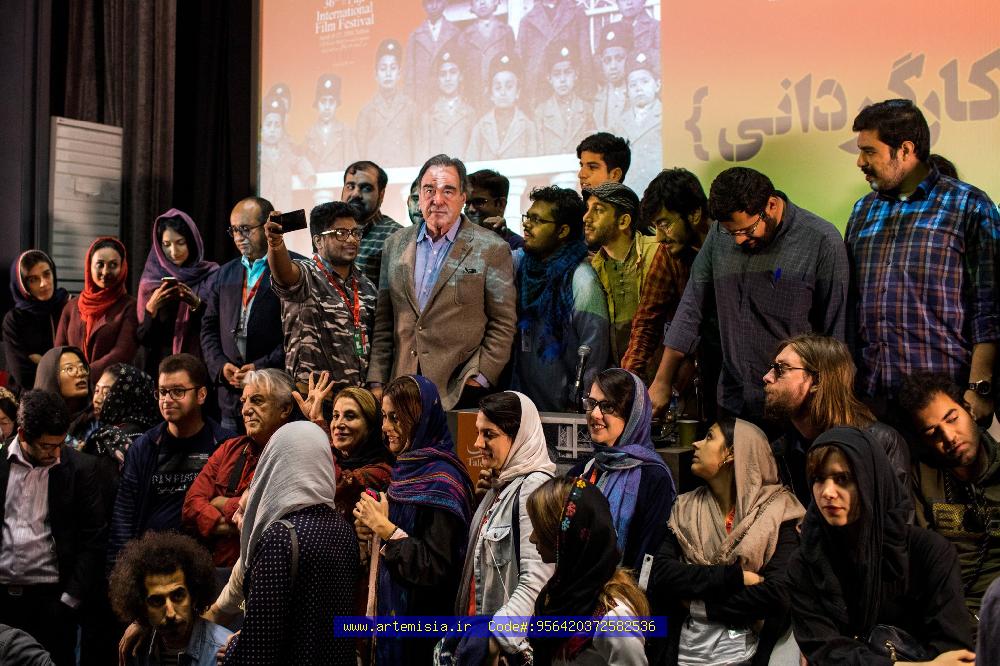 By THOMAS ERDBRINK APRIL 30, 2018
TEHRAN — As the veteran American director took the stage at Iran’s Fajr International Film Festival, the audience stood up, clapping and cheering.
Participants at Oliver Stone’s master class in film-making take a selfie with him at Iran’s 2018 Fajr International Film Festival. Credit Arash Khamooshi for The New York Times

* * * Young men wearing round sunglasses and women with purple dyed hair peeking out from under their compulsory headscarves watched as scenes from “Platoon,” “Midnight Express,” “JFK” and “Any Given Sunday” appeared on the screen. The clip ended with the introduction of the guest of honor: ‘‘American writer and director, Oliver Stone.’’
“You make it seem as if I’m dead already,” Mr. Stone, 71, joked. Typically, Iranian hard-liners try to prevent prominent Americans, even harsh critics of United States policies like Mr. Stone, from obtaining visas. But in his case other forces had prevailed. Iranian politics are divided by those opposing any approach to America and those who feel there should be an outreach.
Now, the American was the guest of honor at an event that, like Iranian society, has undergone major changes in recent years. Established to celebrate the anniversary of the Islamic revolution, the festival has grown more independent, riding a wave of international prizes for Iranian films, including two recent Oscars. 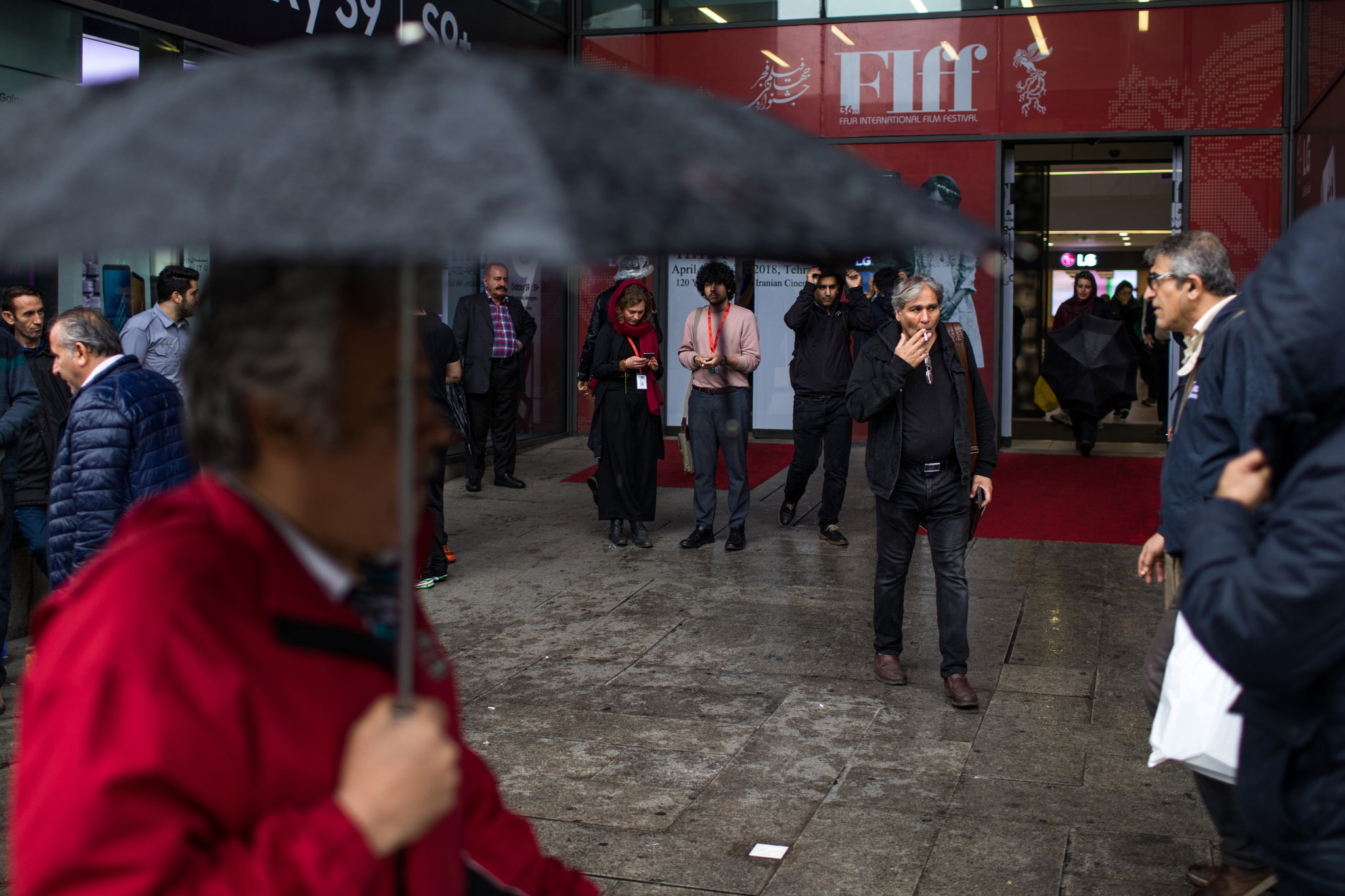 * * * More than 350 foreign guests, selected from hundreds of applicants, traveled to the Iranian capital to see 35 films have premieres at the festival, held in a modern shopping center in downtown Tehran. There were Russians, Indians, Georgians, Europeans, Iraqis, Syrians and others. Concerts of film music were held at some locations. Some people visited Tehran’s Cinema Museum or an exhibition of French art by the Louvre, while others made a pilgrimage to the city’s sprawling cemetery, where they paid respects to the martyrs of the Iran-Iraq war.
“We want to show people that we are not North Korea,” said Reza Kianian, a prominent Iranian actor who is a festival ambassador. “When our guests walk on the streets they see a church, a mosque and a synagogue all in the same block,” he said. “This is not the country you think it is.”
Iran’s award-winning cinema is another example, Mr. Kianian said. Two of the director Asghar Farhadi’s films have won Academy Awards for best foreign language film — “A Separation” in 2012 and “The Salesman” in 2017. “With the festival and inviting so many foreign guests we also want to show that while we have hard-liners, most of our artists are not like this,” he added.
Iranians often suffer from the image presented by “death-to-America” shouting hard-liners, an extremist view not shared by the majority of Iranians. 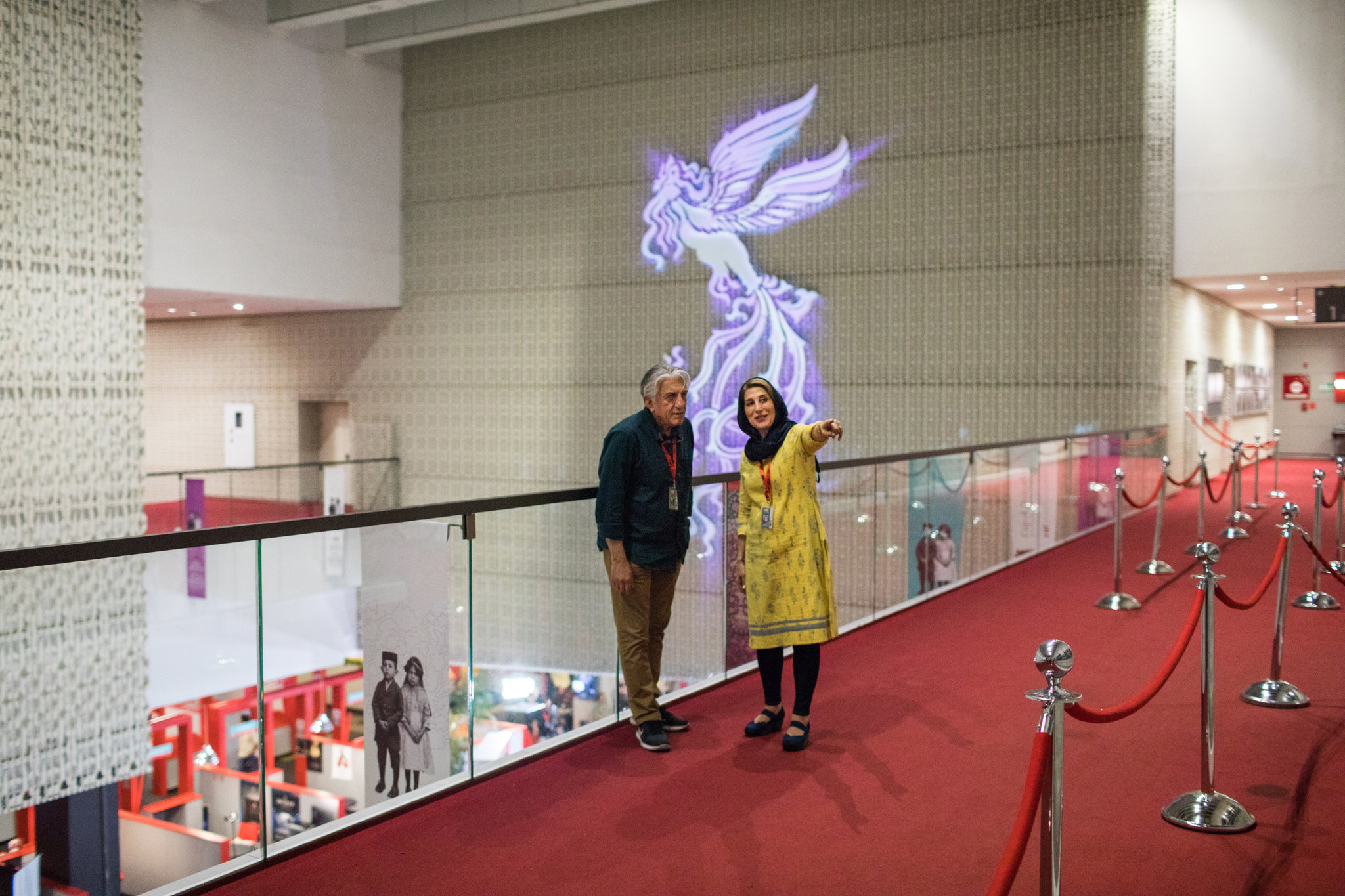 * * * Unlike Hollywood, where movie stars walk the red carpet and wave to their fans from behind velvet ropes, the stars of Iranian cinema mingled freely with ordinary people at the festival.
Fatemeh Motamed Arya, one of the grande dames of Iranian cinema, mingled widely, chatting, taking selfies and directing visitors to cinema halls. “Cinema is a place of dreams,” she said. “I want to show that I’m not from another planet, and make them believe in themselves.”
Mrs. Motamed Arya said that because Iranian censors banned sex, violence and alcohol, the country’s film industry had developed differently from most. “Many of our films,” she said, “are about kindness and humanity.”
Censorship was also a topic during a class in directing with Mr. Stone. 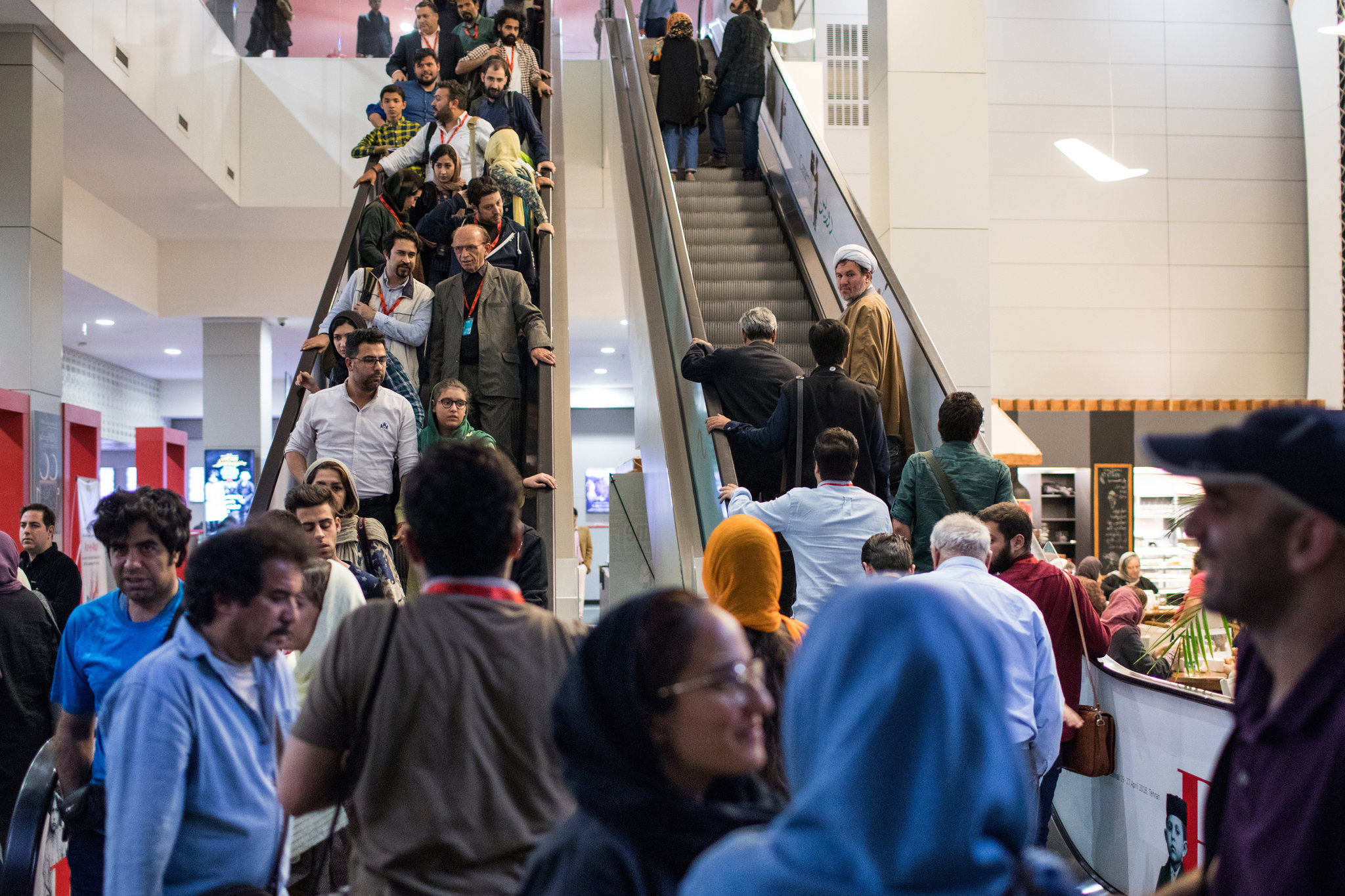 * * * “If you face red lines and censorship, find another way,” Mr. Stone told his audience on Monday, all members of the festival’s Talent Campus, a group of 60 young international filmmakers. They had been flown in to participate in a week of workshops and classes by Iranian and foreign filmmakers. “Hollywood is finished,” Mr. Stone said. “The future is for international cinema.”
He added, “Nowadays, everything is shot with cellphones, and this is radically changing the industry worldwide.”
Film-goers visit the festival. Credit Arash Khamooshi for The New York Times

* * * “If you face red lines and censorship, find another way,” Mr. Stone told his audience on Monday, all members of the festival’s Talent Campus, a group of 60 young international filmmakers. They had been flown in to participate in a week of workshops and classes by Iranian and foreign filmmakers. “Hollywood is finished,” Mr. Stone said. “The future is for international cinema.”
He added, “Nowadays, everything is shot with cellphones, and this is radically changing the industry worldwide.”
For many years, foreign guests were shunned. When the revolutionary ideology was at its stifling height, even the smallest criticism could offend one or another of Iran’s leaders.
With Mr. Stone, even the most conservative cleric would have been hard-pressed to find something objectionable. He called President Trump “Beelzebub,” and the United States “an international outlaw.” He dismissed Emmanuel Macron, the French president, as “a young man without much sense of history.” 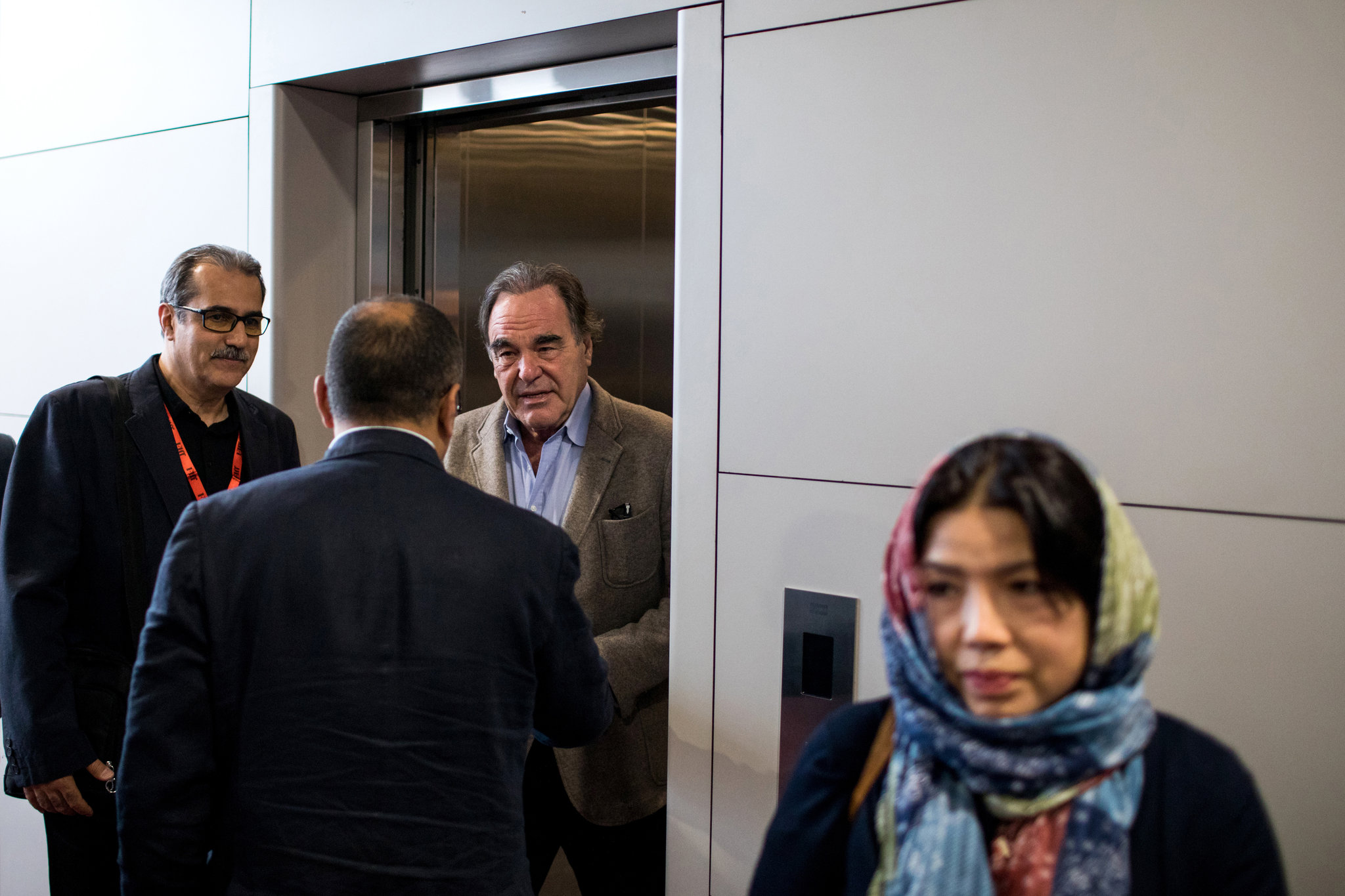 People greet Oliver Stone and his wife, Sun-jung Jung, at the festival. Credit Arash Khamooshi for The New York Times

* * * But, he also cursed a lot, not something that would endear him to the clerics; he did so at least 17 times during the hourlong class, by my count. In Iran, where language in official meetings is poetic, flowery and indirect, the Iranian members of the Talent Campus, even the hipster ones, could not stop giggling when Mr. Stone used an expletive.
How can all his movies be so critical of the United States, Nour Bahri, a 26-year-old filmmaker from Syria, wondered. “Are you perhaps secretly a part of their system?” she asked.
“You think I am an agent for the Central Intelligence Agency,” Mr. Stone replied. “I could never be that, but the top of Hollywood and the C.I.A. are definitely in bed with each other.”
Mrs. Motamed Arya was thrilled to have Mr. Stone as a guest of the festival. “Here it is all about cinema, just like at other festivals in the world.” 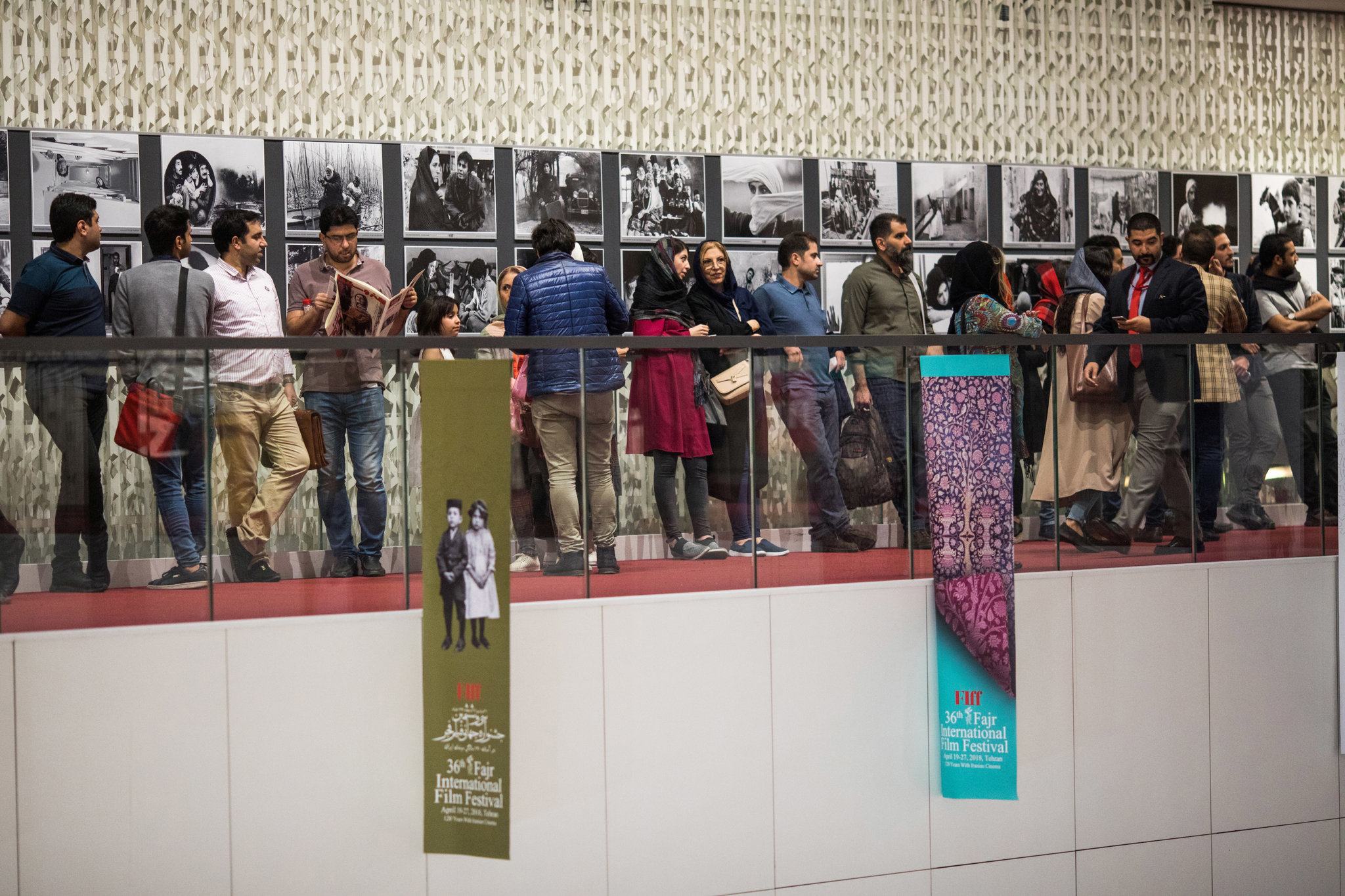