Supreme leader: Europe must follow demands or deal's off 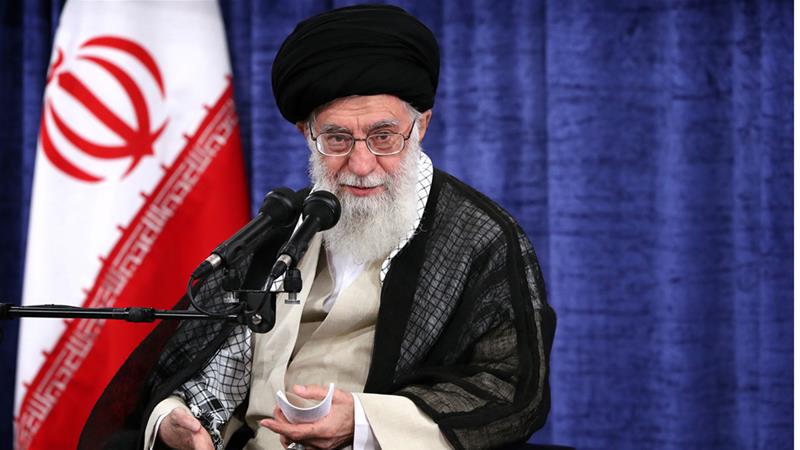 * * * Iran's supreme leader set out conditions for Tehran to stay in its nuclear deal with world powers, including steps by European banks to safeguard trade with Tehran after the US withdrawal.
European powers must continue buying crude and protect Iranian oil sales from US pressure, and promise they won't seek new negotiations on Iran's ballistic missile programme and Middle East activities, Ayatollah Ali Khamenei's official website said on Wednesday.
"European banks should safeguard trade with the Islamic Republic. We do not want to start a fight with these three countries [France, Germany and Britain], but we don't trust them either," Khamenei said.
"Europe should fully guarantee Iran's oil sales. In case Americans can damage our oil sales … Europeans should make up for that and buy Iranian oil."
He warned if the Europeans did not meet these demands, Iran would resume its enrichment of uranium, halted under the deal to minimise the risk of Tehran developing the means to build nuclear weapons.
European powers see the accord as the best chance of stopping Tehran acquiring a nuclear weapon.
Khamenei said over the past two years the United States "has repeatedly violated" the nuclear deal but the Europeans remained silent. He asked Europe to "make up for that silence" and to "stand up against the US sanctions".
'Theatrical show'
Khamenei also fired a new broadside at Washington's rejection of the landmark 2015 nuclear agreement, saying the Islamic Republic could not deal with a country that failed to keep its commitments.
In his first public remarks since US Secretary of State Mike Pompeo demanded Iran make sweeping policy changes, Khamenei expressed revulsion at what he suggested was the casual and boastful way the Trump administration abandoned the accord.
"The Islamic Republic cannot deal with a government that easily violates an international treaty, withdraws its signature, and in a theatrical show brags about its withdrawal on television," he said.
"The current US president will meet the same fate as his predecessors, Bush and the neoconservatives and Reagan, and will vanish from history."
Khamenei did not directly address remarks made by Pompeo on Monday that threatened Iran with "the strongest sanctions in history" if it did not curb its regional influence, accusing Tehran of supporting armed groups in countries such as Syria, Lebanon and Yemen.
Pompeo on Wednesday told a House Foreign Affairs Committee hearing the administration intended to work with "as many partners, friends and allies as possible" to stop what he described as all of Tehran's nuclear and non-nuclear threats.
War drums beating?
Fears have been raised by pundits in recent days that a military confrontation could play out after the US abandonment of the nuclear deal and its imposition of new sanctions.
A senior Iranian military official, Major-General Mohammad Bagheri, said Iran would not bow to Washington's pressure to limit its military activities. The United States "does not have the courage for military confrontation and face-to-face war with Iran", he said.
On Tuesday, the United States has imposed new sanctions against officials of Iran's Revolutionary Guard for allegedly providing ballistic missile-related expertise to Houthi rebels in Yemen.
The elite Guard said in a Wednesday statement: "The American leaders ... have got this message that if they attack Iran, they will encounter a fate similar to that of Saddam Hussein."
Saddam was ousted in a US-led invasion of neighbouring Iraq in 2003, however, the US failed to rebuild the country as promised and thousands of American soldiers were killed in years of rebellion.