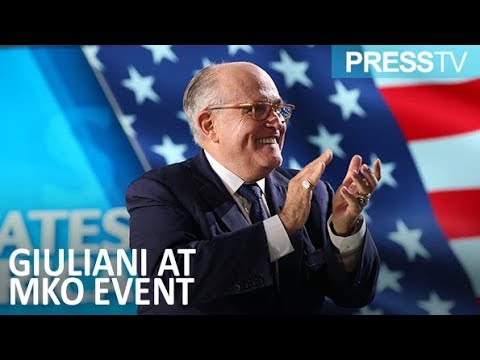 Juan Cole 07/02/2018
Many Trump stalwarts have a peculiar, paid position as lobbyists for the People’s Jihadi Organization (Mojahedin-e Khalq), the Iranian expatriate group aiming to overthrow the government of the Islamic Republic of Iran.
Hence we find Rudy Giuliani addressing their annual convention and pledging regime change in Iran.
Giuliani only has experience of two kinds of regime change. Disastrous and more catastrophic. He thought invading and ocoupying Iraq would be a swell idea.
Personally, I never liked the Islamic Republic of Iran. But I try to be objective. Its government is less Draconian than Saudi Arabia’s, a close American ally, and certainly than North Korea’s, with which Washington is now making nice. Regime change as a project has a long record of failure and blowback. George Kennan’s essay on containing the Soviet Union is worth revisiting here. He pointed out that the social and economic conditions in mid-20th century Russia and China were not at all similar to those in the US, so why should we assume they would have the same form of government? Where they threatened US interests, he said, they should be contained. Otherwise, he implied, there was nothing to do but leave them alone internally. In contrast to all the coup-plotters that followed him (e.g. Iran 1953), and in contrast to the architects of the Vietnam War, Kennan’s vision actually succeeded as policy.
The other thing to say is how ridiculous it is that Trump and Giuliani have conspired to keep out of the US ordinary Iranians who want to pursue an education or business here, but are openly consorting with an organization that has been on the US terrorist watch list!
Although the People’s Jihadis were inexplicably removed from the State Department list of terrorist organizations a few years ago, they have a sordid and violent past of shootings, assassinations and bombings. They were even given bases in Iraq by dictator Saddam Hussein, from which they launched terrorist operations (blowing up children on schoolbuses e.g.) against Iran.
It isn’t just a matter of politics making for strange bedfellows. The tens of thousands of dollars in fees that Rudy Giuliani, John Bolton and other Trump intimates have taken from the People’s Jihadis makes them more or less employees of this terrorist organization.
Even Nancy Pelosi has come out for the People’s Jihadis.
It is the damnedest thing.
When I visited Iran in summer of 1976, the newspapers were full of dire warnings about “Islamic Marxists.” They meant the People’s Jihadis, who were then blowing things up and sniping and committing terrorism to overthrow Mohammad Reza Pahlevi, Iran’s CIA-stalled puppet king. After the 1979 Revolution and through the 1980s, the People’s Jihadis or MEK or MKO went into opposition and the ayatollahs attempted to crush it. Thousands were killed or jailed, and the jihadis took to the streets, sometimes spraying machine gun fire on foot or on the backs of motorcycles. In 1981, they set off an enormous explosion that killed At one point in 1988 the regime committed a prison massacre of them. Saddam Hussein gave them a base from which to commit terrorism inside Iran.
That the chief high Poobahs of the US government on both sides of the aisle have now rehabilitated this political cult with its violent past tells you all you need to know about the poisonous atmosphere in Washington. My suspicion is that if you dig a little you will find the Israel lobbies complicit in all this, as well.
But as politics it is not only evil but stupid. The Iranian public long ago decided against the People’s Jihadis, whom they view as glassy-eyed terrorists. The young people in Iran may want a different society, but it certainly is not Maryam Rajavi’s cult.
Although the official Press TV is an Iranian propaganda organ, in this particular case it is not clear to me that its point of view is very far from that of the Iranian public. It is worth seeing the other side here:
Iran’s Press TV: “Trump lawyer Giuliani steals show at anti-Iran event”
https://youtu.be/HYjKHhbJRnw