US Refuses European Requests for Exemptions From New Iran Sanctions 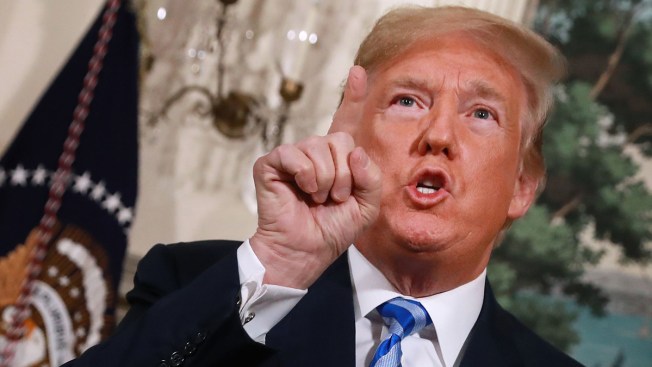 “We will seek to provide unprecedented financial pressure on the Iranian regime," the U.S. said, rebuffing Britain, France, and Germany.
Published at 8:41 AM CDT on Jul 14, 2018
U.S. President Donald Trump announces his decision to withdraw the United States from the 2015 Iran nuclear deal in the Diplomatic Room at the White House May 8, 2018, in Washington, DC. After two and a half years of negotiations, Iran agreed in 2015 to end its nuclear program in exchange for Western countries, including the United States, lifting decades of economic sanctions. Since then international inspectors have not found any violations of the terms by Iran.

* * * The United States has rejected an appeal from Britain, France and Germany to grant broad exemptions to European firms doing business in Iran, saying it would press ahead with sanctions intended to exert “unprecedented” economic pressure on the Tehran regime, U.S. and Western officials told NBC News.
Replying to a June 4 letter from the European powers, Secretary of State Mike Pompeo and Treasury Secretary Steven Mnuchin wrote that the Trump administration would not agree to wide-ranging protections for European companies operating in Iran and instead would grant only limited exceptions based on national security or humanitarian grounds, the officials said.
The stern message comes as the White House has ratcheted up its rhetoric toward Iran, accused Tehran of plotting terrorist attacks in Europe and vowed to hammer the country’s economy.
--- ---
...