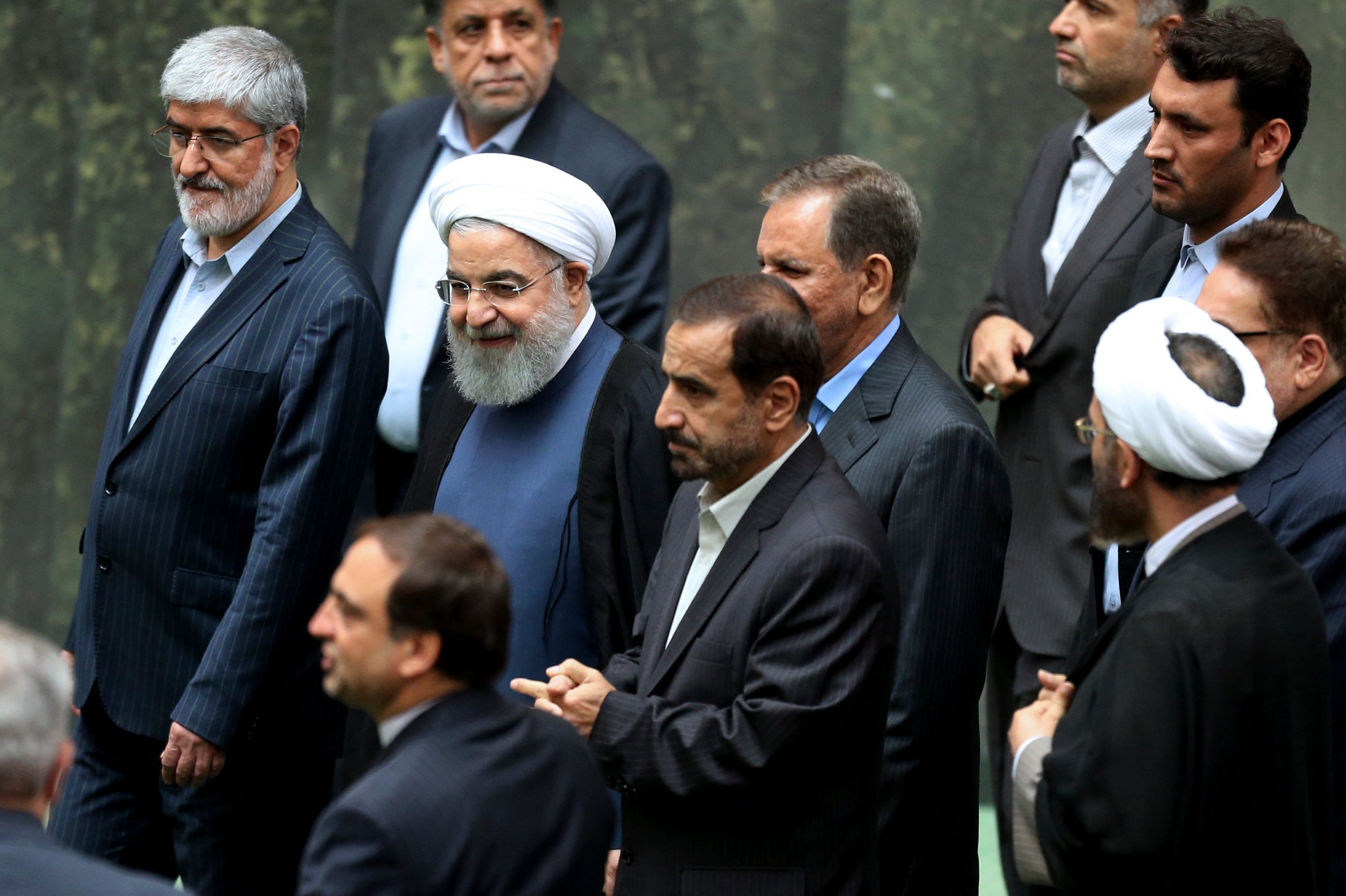 By Richard Pérez-Peña
Aug. 28, 2018
LONDON — Iran’s Parliament summoned President Hassan Rouhani to answer questions on Tuesday about the country’s economic crisis, and then voted to reject his explanation, in a remarkable rebuke of a sitting leader.
President Hassan Rouhani of Iran, second from left, arriving in Parliament in Tehran on Tuesday to answer lawmakers’ questions. He blamed United States sanctions for Iran’s troubles.CreditCreditVahid Salemi/Associated Press

* * * Mr. Rouhani blamed United States sanctions, not government management, for his country’s troubles. But after he answered five questions about economic challenges like high unemployment and the collapsing value of the national currency, the rial, a majority of lawmakers voted that they were “not convinced” by four of his answers.
Elected by wide margins in 2013 and 2017, Mr. Rouhani is seen as a moderate in Iranian politics, and he campaigned on easing hostilities between his country and the West, and increasing economic opportunity. In 2015, his government struck a deal with the United States and other powers to give up elements of its nuclear program in return for the lifting of some sanctions.
But this year, President Trump withdrew the United States from that agreement and reimposed sanctions not only on Iran but also on companies doing business with the country. That has persuaded many European businesses to stay away from the Islamic republic, though their country’s governments still support the deal.
Iran experts say that unwinding the agreement could strengthen the hand of hard-liners who oppose both the deal and Mr. Rouhani’s reformist agenda. His government runs many of the country’s daily affairs, but the ultimate power rests with the supreme religious leader, Ayatollah Ali Khamenei, and the unelected Guardian Council.
The lawmakers’ vote came two days after Parliament dismissed the finance minister. In the last few weeks, the country’s central banker and its labor minister have also been fired.
It was not clear what impact the rebuke of Mr. Rouhani would have. Officials said the matter could be referred to the judiciary, which could, in theory, find grounds for impeachment proceedings against the president.
But Mr. Rouhani’s allies remain the largest faction in Parliament. And in a country where tensions are high and protests have cropped up in many places, the potential for civil unrest could tamp down any party’s appetite for trying to remove a president and call new elections.
In an arresting aside during the proceedings, Mr. Rouhani blamed much of the economic troubles on street protests that began on Dec. 26, “when people saw suddenly that some people were chanting on the streets, and the slogans little by little went out of bounds.”
The protests, he said, encouraged President Trump to declare his intention to withdraw from the nuclear agreement. “His threat of withdrawal and the domestic turbulence and international threats frightened the people,” undercutting the economy, Mr. Rouhani added.
Lawmakers said that a decision on referral to the judiciary would not be made before next week, the Iranian news agency ISNA reported.
The agency quoted Mr. Rouhani as telling the Parliament: “Nobody, including the noble people of Iran, our friends and enemies around the world, must think that today is the start of a rift between the government and the Parliament.”
--- ---
...