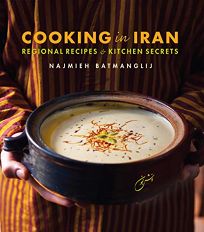 Najmieh Batmanglij. Mage, $65 (728p) ISBN 978-1-933823-95-9
Batmanglij (Joon: Persian Cooking Made Simple), who grew up in Iran and has written extensively of the country’s cuisine, offers a massive and thorough guide to Persian cuisine. Batmanglij spent three years traversing the country, stopping in all of its regions, and in this collection of more than 250 recipes she shares an assortment of kebabs was well as osh, a traditional porridge-like soup made with butternut squash or carrot and bulgar. Highlights abound: Azerbaijani dumpling soup, featuring dumplings stuffed with ground meat in a spicy tomato broth; saffroned almond and pistachio baklava; walnut and sumac meatballs (made with lamb or turkey thigh); a savory mushroom pie, similar to the Russian pirozhki; and pistachio cake. Batmanglij fills the book with photos of vendors, farmers, and ancient ruins, and offers history lessons and bits of trivia (“The oldest archeological evidence of pistachios was found in Jarmo”). Stories of intimate family dinners shared on her journey and recipes she discovered talking with the locals—such as sweet and sour patties with chicken, mint, and turmeric, and almond paste with saffron (a friend’s mother would “spread the almonds on a clean sheet and cover them with pussy willow flowers”)—lend the feel of flipping through a scrapbook with a friend. This is a terrific, reverential, and accessible cookbook. (Nov.)
--- ---
...