Faima BakarMonday 5 Nov 2018 12:07 pm
Sainsbury’s has received backlash for putting a ‘Persian curry’ recipe in their food magazine which some believe isn’t true to an authentic Iranian meal.
The magazine cover showed a ‘golden Persian curry’ but Iranian people, among others, complained that the supermarket version was getting confused with Indian cuisine, accusing the supermarket of casual racism.
According to the publication, the dish took inspiration from the traditional Persian food fesenjan, ‘fused with an Indian-style curry’ but people pointed out that a spice mix, as used in a curry, would not be used in a fesenjan.
Some felt that using ingredients found in Persian food, such as pomegranates, does not make the meal Persian.
Fesenjan is more of a stew flavoured with pomegranate paste and ground walnuts. Often with duck or chicken, many recipes include no spices, unlike in Indian food.
‘To treat Iranian and Indian cuisines as virtually indistinguishable, despite knowing in reality they are very different, in order to save their readers the effort to learn about a new Iranian cuisine which the magazine wants to promote on its front cover smacks of lazy, casual racism and is abhorrent,’ British Iranian Banafsheh Hay, who wrote to complain to Sainsbury’s, told the Observer.
British Iranian comedian Shappy Khorsandi was also outraged by Sainsbury’s choice. She wrote: ‘It’s an insult to my motherland and forefathers and heritage.
‘No one in their right mind calls Persian food ‘curry’. We are a herby people, not a spicy people. If you want proper fesenjan, get the recipe from my mum.’
I’m guilty of “fusion cooking” myself but always put “Persian-style” or “Persian-inspired” in the title of the recipes that aren’t authentic or strictly persian. This dish doesn’t sound like it would taste Persian at all. Persian ingredients in a dish don’t make it Persian.
— Persiancooking (@sinaiee_maryam) November 4, 2018
Not everyone thinks it’s a big deal though as it could be described as fusion cooking. Hasmik Nazary, who is Persian Armenian, born and brought up in Iran, told Metro.co.uk: ‘There’s no such thing as a Persian curry, it doesn’t exist.
‘There are seven different spices that go into a curry, and these aren’t traditionally Persian flavours. However, the countries (Iran and India) are very close in terms of food tastes. Personally I don’t think it’s rude to mix the two and call it a Persian curry, because there are often influences from other cultures in food – it’s just part of cooking.’
We contacted Sainsbury’s for comment and a spokesperson said: ‘We love developing exciting recipes for Sainsbury’s customers and our inspiration comes from different cuisines around the world. We wanted to introduce Persian flavours to readers who may not have enjoyed them before, and so we created a recipe which is inspired by the traditional Persian dish fesenjan, fused with an Indian-style curry.
‘We’re sorry for any offence this may have caused, as this was most certainly not our intention.’
--- ---
...

'A Thousand Years of the Persian Book' - WSJ... 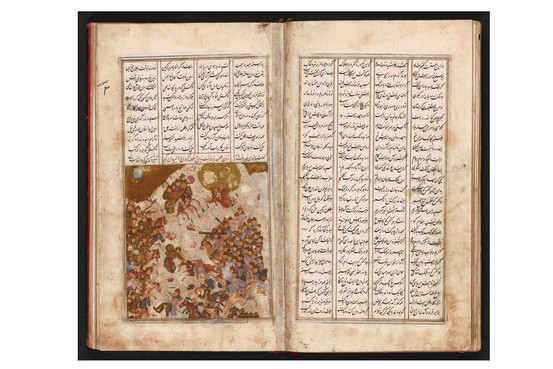