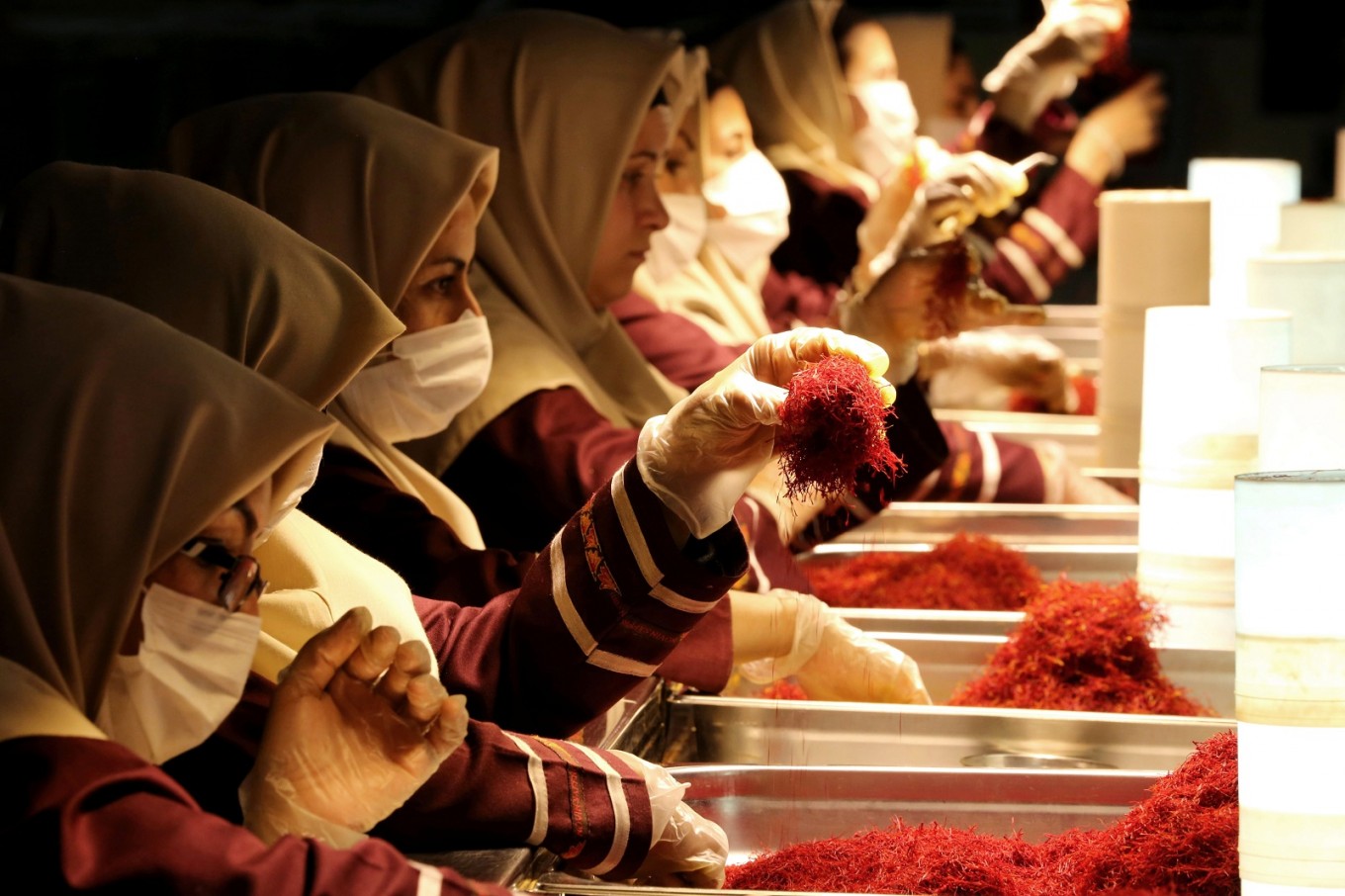 * * * The laborers edge their way across a field of bright purple flowers gathering up the world's most expensive spice, a bounty that makes this dusty corner of Iran a crucial part of global cuisine.
The delicate purple leaves of the Crocus sativus plant hold just three or four of the even more delicate red stamen, better known as saffron, that sprouts for just 10 days a year.
These tiny filaments are currently selling in local markets for 90 million rials per kilo -- about $700 on Iran's volatile exchanges -- and perhaps four times higher abroad.
The government says more than 90 percent of the world's saffron grows from the hard soil in Khorasan province of northeastern Iran -- a figure corroborated by France's specialist institute of agriculture and fishing FranceAgriMer -- eventually finding its way into Spanish paellas, Indian curries, Swedish saffron buns and much more.
India is a distant second, followed by Greece, Morocco, Azerbaijan, Afghanistan and Spain, according to a FranceAgriMer report in 2013.
The star producer in Iran is the small town of of Torbat-e Heydariyeh, about 700 kilometres (435 miles) east of Teheran -- which accounts for a third of global production, according to FranceAgriMer.
But poor marketing means Iran has not always won the credit it deserves as the home of saffron, having mostly exported it wholesale to other countries who label it as their own.
"All the cultivation is done here, but the marketing and sales is done elsewhere," local parliament member Saeid Bastani told AFP.
"The people of the world should know that all saffron -- of any brand in any market in the world -- is Iranian whether it says Spain, Italy or Switzerland," he added with just a sprinkle of patriotic exaggeration.
The government is working with local businesses and farmers to fix the problem.
From his swish new factory on the outskirts of Mashhad, Ali Shariati, CEO of Novin Saffron, sends out around 15 tonnes of high-grade saffron to world markets each year and is spearheading "Made in Iran" efforts.
It's tricky because the major markets each have their own saffron needs that require specific packaging and branding -- Spain wants powder for paella, Britain likes entire threads for Indian cuisine, Sweden likes tiny capsules for seasonal saffron treats.
"We have to keep innovating and adapting so we can compete with the marketing in other countries," said Shariati.
Drought migration
Other issues are forcing innovation on the industry -- most pressingly, the devastating drought that has hit Iran's dry regions for the past two decades.
Saffron plants require much less water than many other crops, but the drought is still causing a migration northwards.
"The land being cultivated is gradually moving north, but that means they're moving into wetter regions and that's no good because the quality is better in dry areas," said Amin Rezaee, a farmer in the heart of saffron country -- around two hours' drive south of Mashhad.
Like most farmers, he has been sucking water out of the ground to water his land, but now realises he must invest in more sophisticated irrigation systems if he wants it to survive.
"It's a problem that people are irrigating in traditional ways. They must start to invest in modern methods," he said.
At his factory, Shariati said the problem is easily solvable with better education and support for villagers, which could boost Iran's production from 400 to 1,000 tonnes per year.
The biggest issue for farmers, he recognised, was navigating Iran's nightmarish banking sector, which is notoriously reluctant to lend to small businesses.
So under a new "fair trade" scheme his firm now organises loans on farmers' behalf, bulk-buys equipment at cheaper prices, and provides education on farming techniques.
"We're educating at least 20,000 farmers and we have guaranteed purchases contracts with 4,000," he said.
"We want them to deliver more organic saffron and improve their lives at the same time."
'Salt, pepper, saffron'
The other obstacle is Iran's struggling economy, which has lately seen wild fluctuations in the currency, in part due to US sanctions.
"The price of bulbs, fertiliser and labourers have all trebled this year, but the price of saffron has only doubled," said Mohamad Jafari, whose family has been selling saffron in the small town of Torbat-e Heydariyeh for half a century.
That is good for exports, but another blow for Iranians hit by soaring prices.
Still, most people in the saffron trade remain upbeat.
International sales have been boosted in the past five years by increasing interest from China, and foodstuffs are protected from US sanctions -- making it a priority export for the government.
"The biggest problem with saffron is that people don't know about saffron," said Shariati.
"We want them to think 'salt, pepper, saffron'."
--- ---
...