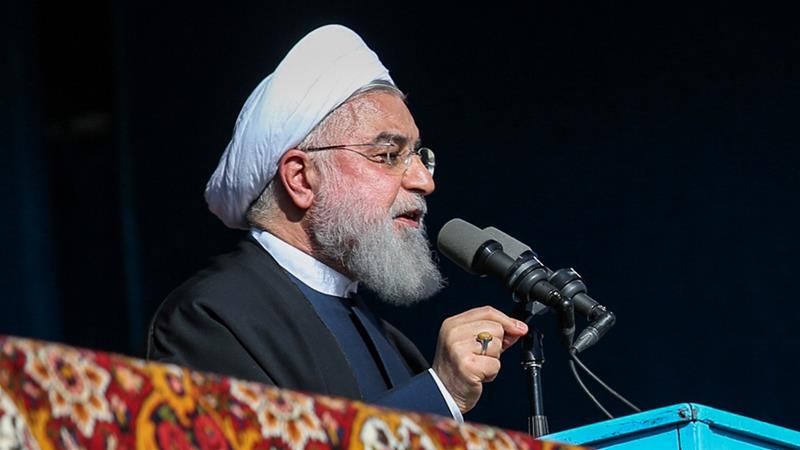 He also accused US of trying to 'foment fear' among other countries to prevent them from investing in Iran.
In October, Rouhani had accused the US of seeking regime change in Iran [File: AFP]

* * * Iranian President Hassan Rouhani has denounced US President Donald Trump's decision to reimpose economic sanctions against Tehran, calling it a form of "economic terrorism".
Speaking at a regional security conference in Tehran on Saturday, Rouhani said the United States' intensions against Iran were "evident" when Trump withdrew from the 2015 nuclear deal, also known as the Joint Comprehensive Plan of Action (JCPOA).
"The unjust and illegal American sanctions against the Iranian nation is a clear example of terrorism," he told the gathering, which was attended by top legislative officials from Iran, China, Russia, Turkey, Afghanistan and Pakistan.
He also accused the Trump administration of trying to "foment fear" among other countries to prevent them from investing in Iran.
In May, Trump announced his decision to withdraw from the nuclear deal. That paved the way for the return of US sanctions, which came in two phases in August and November.
The first round of sanctions targeted Iran's aviation as well as trading of gold and currency. The second round in November was directed at its oil export and banking industry.
Countries and non-American companies face stiff penalties by the US if they continue to do business with Iran. However, the US also issued waivers to several countries, allowing them to continue buying Iranian oil.
The US sanctions have led to diminished foreign investments in Iran in the last few months, forcing many companies to shut down their operation, while also causing the Iranian currency to plummet and triggering inflation.
The US sanctions, as well as calls by several Trump advisors for the toppling of the Iranian regime, have triggered more tensions and sharp rhetoric between the two countries.
In October, Rouhani had accused the US of seeking regime change in his country.
Iran continues to be a signatory to the nuclear deal, and the United Nations inspectors have repeatedly said that Tehran continues to abide by its obligations in the multilateral agreement.
But Tehran has also hinted at abandoning the deal if the country does not get economic benefits from it.
Meanwhile, Iranian Foreign Minister Mohammad Javad Zarif warned that the US sale of arms in the Middle East is turning the region into a "tinderbox".
"The level of arms sales by the Americans is unbelievable and much beyond regional needs and this points to the very dangerous policies followed by the Americans," Zarif said, according to the ILNA news agency earlier on Saturday.
SOURCE: Al Jazeera News