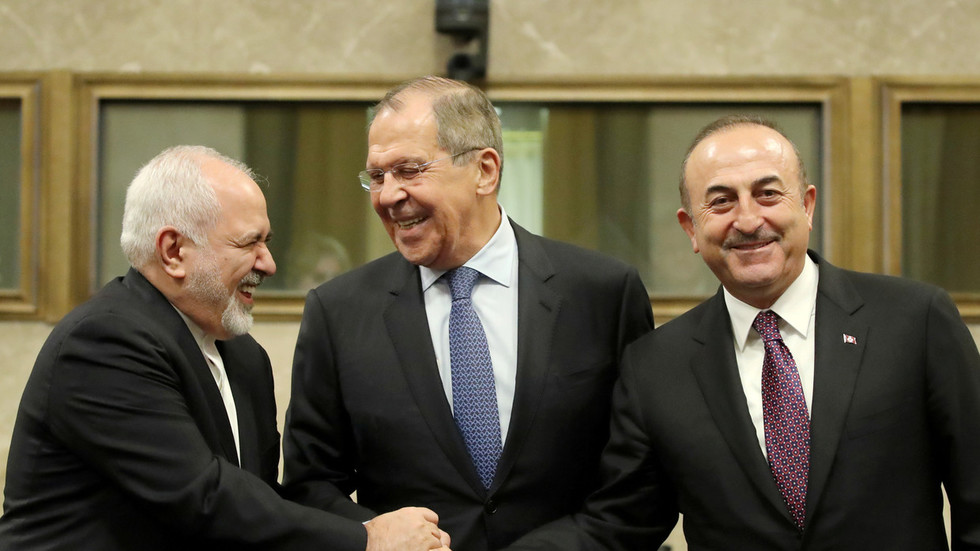 Top diplomats from Russia, Turkey and Iran have agreed to ensure that a 150-strong committee to draft a new Syrian constitution will convene for the first time early next year as they wrapped up a meeting in Geneva on Tuesday.
Russian Foreign Minister Sergei Lavrov, Turkish Foreign Minister Mevlut Cavusoglu and Iranian Foreign Minister Mohammad Javad Zarif agree on forming a constitutional committee in Syria, at the United Nations in Geneva, Switzerland, December 18, 2018. © REUTERS/Denis Balibouse

* * * “We have agreed to take efforts aimed at convening the first session of the Syrian constitution committee early next year. These steps will lead to the launch of a viable and lasting Syrian-owned, Syrian-led, UN-facilitated political process,” Russian Foreign Minister Sergey Lavrov said in a statement following the meeting hosted by UN Special Envoy for Syria Staffan de Mistura.
The agreement, which could pave the way for political reconciliation in the war-ravaged country, was struck between Lavrov, Turkish Foreign Minister Mevlut Cavusoglu, and Iranian Foreign Minister Javad Zarif.
The creation of the 150-member body was first envisaged during a UN-backed summit in Sochi last January, which reinvigorated the stale Geneva peace process. However, efforts had been without a major breakthrough due the parties’ inability to agree on the composition of the committee.
The body will consist of 50 representatives from the Syrian government, 50 representatives from the opposition, and the remaining 50 are intended to be “independent” delegates of civil society chosen by the UN.
The latter has become a bone of contention, with Damascus reportedly opposing some of the candidates.
The list has not been finalized as of yet, but the trio of Russia, Turkey and Iran is nearing a mutually acceptable solution, Cavusoglu said after the meeting.
“As guarantor states, we are working together with the UN on this issue. We are gradually moving towards the finish line,” he said.
Cavusoglu stated earlier that Turkey will work with Syrian President Bashar Assad if he remains in power after “very credible, transparent, democratic and fair” elections are carried out, which is the ultimate goal of the constitutional committee.
It was hoped that the committee would convene before Mistura, who is stepping down in December, leaves his post. Speaking after the meeting, the outgoing special envoy wasn’t overly optimistic, however, saying that “there is an extra mile to go” before having a balanced and credible body tasked with drafting a constitution.
Meanwhile, the US – which has so far been wary of the possibility of intra-Syrian reconciliation – seems to be taking a less hawkish approach, with its special representative in Syria, James Jeffrey, recently saying that it doesn’t want to topple Assad anymore.
“We want to see a regime that is fundamentally different. It’s not regime change – we’re not trying to get rid of Assad,” Jeffrey said at the Atlantic Council meeting on Monday.
This doesn’t mean that the US has actually abandoned its plans to dislodge the Syrian president, however, according to Joshua Landis, director of the Center for Middle East Studies at the University of Oklahoma. Instead, it would merely prefer to do so without spilling blood.
“The Americans are counting on this committee’s constitution change and [the] election overseen by the UN, which will change the regime peacefully and bring about a peaceful settlement in America’s favor,” he argued.
Landis predicted that since this is “unlikely to happen,” the US will maintain a presence in Syria until it occurs.
“That could mean that America is an open-ended force in Syria,” he said.
--- ---
...

rt.com 08/01/2014 Politics
Iran emphasized on Monday its support for a political solution in ending the Syrian civil war while denouncing the US suggestion of a minor role in th...View Details»

Lavrov Sure Iran Part of Efforts to Settle Syria Crisis ...

voiceofrussia.com 17/01/2014 Politics
The upcoming Geneva-2 international conference on Syria will last more than one day and will include several rounds of direct negotiations between the...View Details»