Iran says US presence in Syria 'wrong' from the start 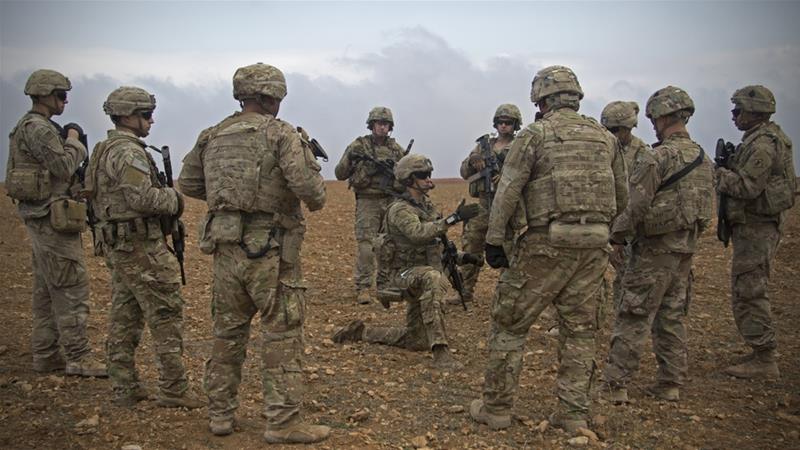 In first Iranian comments on Trump's pull-out plan, Tehran says US caused 'instability and insecurity' in the region.
The US currently has around 2,000 forces deployed in Syria [File: US Army/ AP Photo]

* * * Iran's Foreign Ministry has said the US military presence in Syria damaged the region, in the government's first comments on President Donald Trump's plan to pull US troops from the war-torn country.
Trump vowed on Thursday that the United States would no longer be the "policeman of the Middle East" as he ordered troops back from Syria.
"The presence of American forces was from the very start, in principle, a wrong and illogical move and a primary cause of instability and insecurity in the region," Iran's foreign ministry spokesperson Bahram Ghasemi said on his Telegram channel on Saturday.
Tehran has been a key supporter of the Syrian government.
Iran's Revolutionary Guards have a contingent of commanders and advisers deployed in Syria in support of President Bashar al-Assad, and have ferried weapons and thousands of fighters to the front line from various countries.
The US currently has around 2,000 forces deployed in Syria in two areas along the Iraqi border that was partly aimed at keeping Iranian forces in check.
Filling the void
Turkish President Recep Tayyip Erdogan on Friday "cautiously" welcomed the planned US withdrawal from Syria, announcing that it would delay a military operation against Syrian Kurdish fighters, who have been supported by the US in Syria since 2014.
The Turkish government views the US-backed YPG (Kurdish People's Protection Units) as an extension of an armed group fighting inside Turkey.
According to reports in Turkish media, Trump made the decision to pull US troops out of Syria in recent a phone call with Erdogan, but the White House has denied the claims.
Reporting from the Turkey-Syria border, Al Jazeera's Zeina Khodr, said that it appeared that the US had chosen to strengthen its alliance with Turkey at the expense of its Kurdish allies in Syria.
"A recent phone call between the Turkish and American presidents seems to have ironed out a lot of differences between these two NATO allies, which have had disputes over the Syria strategy in recent years," she said. "President Erdogan on Friday, in his speech, outlined how this relationship has improved and how he sees eye to eye with President Trump on issues regarding Syria."
"It seems that Turkey wants an orderly pull-out; they don't want the American troops to rapidly pull out, because northeast Syria would be up for grabs. They don't want to see, for example, the Syrian government taking control of the area without firm guarantees that the YPG presence, or the threat according to Turkey, will be neutralised. What Turkey would like to see, is the United States hand over this area to its local allies in Syria."
A senior Kurdish politician on Friday called on France to play a larger role in Syria following the US withdrawal.
Ilham Ahmed of the Kurdish-led Syrian Democratic Forces (SDF) warned on Friday that the decision to withdraw would have dangerous repercussions and a destabilising effect on the entire region.
Sami Nader, Director of the Levant Institute for Strategic Affairs, told Al Jazeera that the US decision to withdraw risks leaving a power vacuum.
"It seems that the decision is not based on a strategic vision, or strategic plan, because it is in contradiction with the main strategy of Washington," he said. "The number one objective of the United States in the region is to face Iran."
"There is a big question mark about who is going to fill this void. Maybe the Turks, maybe the French, but this is not clear.