Is this a good time to pile your money into a Persian Carpet? 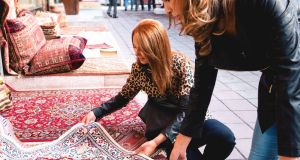 These unique artworks transform a living space. But do your homework before investing
Elizabeth Birdthistle
Buying carpets in Istanbul. Photograph: Getty

In 2013, a collective sigh from the attendees of a Sotheby’s auction in New York echoed throughout the room. A 17th-century Kerman carpet achieved $33.8 million – more than double its pre-sale estimate.
Persian rugs, handwoven from silks, cotton and wool for centuries – the Pazyryk rug, discovered at a burial tomb in Siberia in 1949, is over 2,400 years old – have captivated collectors due to their antiquity and exoticism. These unique works of art were the preserve of kings, religious orders and rulers throughout history.
The most famous is the Ardabil carpet – on display London’s Victoria and Albert Museum. Endless replicas of this rug dating from 1539 exist, most notably at 10 Downing Street, and even Adolf Hitler had a copy at his Berlin office.
Sigmund Freud, the father of psychoanalysis, had a Persian rug covering his famous couch, which is on display at the Freud Museum in London, as he believed that these treasures held the secrets to mysteries and hidden thoughts.
Created with natural dyes from berries, insects, minerals and seeds, the weaving techniques and dye recipes were guarded as precious secrets by tribal weavers. The word “heirloom” is said to have evolved from the looms left to family members, and historically the carpet was the most valuable dowry currency in the East.
Symbolism
Every Persian carpet tells a story, unique to the weaver who created it, and the symbolism associated with the colours and motifs is a subject of anthropology in itself. For centuries painters have featured these items in their works, and indeed many musicians – including Leonard Cohen – crooned away on stage standing on these antiquities.
Edgar Allen Poe, writer of mystery and the macabre, said that “the carpet is the soul of an apartment”, and the complexity of its design meant that “while a judge on common law may be an ordinary man, a judge of a carpet may be a genius”. 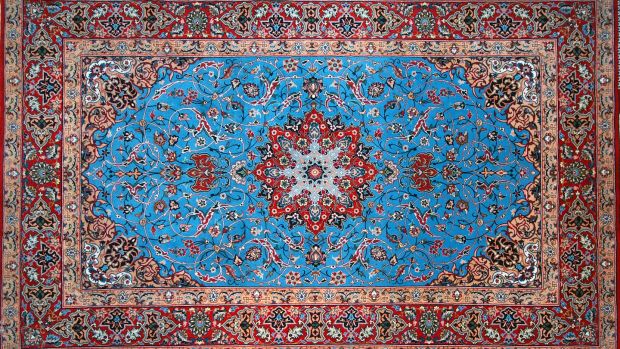 Persian wool and silk carpet from a famous weaver in Isfahan city, Iran. The carpet is very fine and the design, typical of Isfahan, is well drawn. Photograph: Getty

* * * Peter Linden, one of Ireland’s experts and a regular lecturer on Persian carpets, began his carpet education at the age of 12 while living in Sweden – through his father, who was an avid collector. “He showed me the secrets to the knots and dyes, and I ended up as childhood friends with the sons of Scandinavia’s expert on Persian rugs. I supposed it was the best free education on the subject,” he says.
Having traded in rugs and carpets from his gallery in Blackrock since 1979, he closed the gallery in 2006; its contents were auctioned by Adam’s that year. “Good standard pieces are very good value at the moment,” says James O’Halloran of Adam’s. “They are as individual as a painting, and, being organic with a life of their own, add a unique element to interior design.”
Private consultant
Linden now works as a private consultant to a worldwide list of clients, advising on technical information, weavers’ history and location where the work was created.
“What makes these valuable are their numbers are decreasing – hence values are rising, and designers, artists and collectors really covet these pieces – the past two years have been incredibly busy,” says Linden.
In countries such as Turkey, dealers will tell you what you want to hear
In terms of age, carpets over 100 years old are considered antiques. The youngest Linden will deal with are from 1935 to 1940, as mass production began after the second World War.
When searching for a carpet, Linden suggests to find a neutral expert to purchase from. “In countries such as Turkey, dealers will tell you what you want to hear. There is severe shortage of good pieces, in a sense their stocks have sold out, having been long since exported to the West. A good dealer will let you try out the carpet at home, and will offer to exchange or trade in your rug at purchase price levels.”
Dyes are another indicator. “If you separate the pile and look at the dye – if there is a darker colour at the root, the dye is either of inferior quality or more than likely – as is the case with 99 per cent of carpets in Turkey – it has been given what is termed an antique wash.” This is where carpets have been given a chemical bath and are left to age artificially in the sun to make them look 200 years old. Also, if patterns have an identical sequence, this has been done by machine and not by hand.
Overall value
Knots per square inch (KPI) plays a tremendous role in their overall value. By examining the back of a piece you can work out the KPI, by selecting a square inch, then by counting the number of knots going upwards, then sideways, and multiplying the two numbers. The more valuable items have a KPI closer to 1,000, lesser-grade rugs will be closer to 100.
After energy products, handmade rugs are Iran’s most important export, accounting for €412 million in exports in 2017. The US is by far the largest importer of modern and antique Persian rugs in the world, importing about $97 million worth of rugs in 2017, but president Donald Trump re-imposed sanctions on the importation of these items to the United States in May 2018. The online vintage website Etsy wrote to all its US-based suppliers announcing that trade in antique and modern rugs would cease, regardless if the rugs were based in the US.
This has had a devastating impact on tribal nomadic weavers, as their historic trade has dwindled almost overnight. This only adds to their rarity as collectible items.
Sheppard’s of Durrow in Co Laois has a large selection of Persian rugs and carpets for sale in its Décor Decoded auction which will take place on January 29th.
--- ---
...