Crisis in Venezuela 'fueled' from outside, those responsible not interested in talks – Turkish FM

Crisis in Venezuela 'fueled' from outside, those responsible not interested in talks – Turkish FM ...
rt.com 05/02/2019 Politics 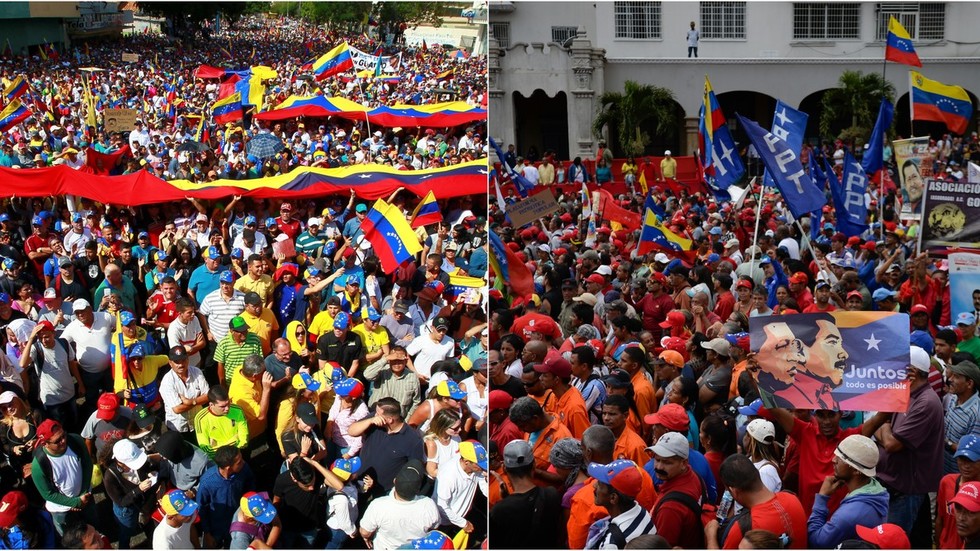 Ankara has warned that the states refusing meaningful dialogue with the legitimate authorities of Venezuela only ‘help’ to plunge the country into more chaos and uncertainty, rather than contribute to resolving the problem.
(L) Opposition supporters protest in Maracaibo, Venezuela, on February 2, 2019. / Reuters / Isaac Urrutia; (R) Supporters of President Nicolas Maduro demonstrate in Caracas, on January 23, 2019. / AFP / Luis Robayo

* * * Turkish Foreign Minister Mevlut Cavusoglu cautioned that “there is a spark that can turn into a fire at any moment.” A crisis like that should be defused “through dialogue,” and Venezuelan authorities have expressed readiness for it – yet foreign states are apparently not interested.
Is that how it happened? No. On the contrary, [the crisis] was fueled from the outside. The people of Venezuela were punished. Millions of people were forced to leave Venezuela.
Turkey’s top diplomat was speaking on Sunday before the election ultimatum, given to the government of Nicolas Maduro by several European countries, expires. Twelve days ago, Juan Guaido declared himself “interim president” of Venezuela, claiming current President Nicolas Maduro is no longer fit to lead and that he essentially usurped power.
Following the announcement, Venezuela saw thousands-strong rallies, both for and against Maduro. Some of the country’s high-ranking officials, including a defense attaché in the US, also announced their support for Guaido, while the majority remained loyal to Maduro, including the army.
Almost immediately after what has been labeled “a coup” by officials in Caracas, the US announced that it is backing the new interim leader and pledged their full support. A number of Washington’s Western allies and Latin American countries also recognized Guaido. Turkey, Russia, Mexico, and a number of other countries say they still consider Maduro the legitimate president and will continue to back his government.
In a bid to put more pressure on Nicholas Maduro, the UK, Spain, Germany, and France issued a blunt ultimatum, calling on him to announce new elections by the end of Sunday (February 3). If Maduro does not relent, they pledged to automatically recognize Guaido as the president of Venezuela. The ultimatum was slammed by Moscow, which pointed out the “identical” wording of the threat.
On Saturday, amid rallies both in support of and against his government, Maduro proposed snap elections to the national Assembly (a body dominated by opposition). Yet, he did not name any exact date, signaling he is unlikely to cave in to the ultimatum.
US Vice President Mike Pence said “this is no time for dialogue,” but rather the “time for action.”
Echoing the tough talk from Pence, National Security Advisor John Bolton doubled down, saying Washington will send “humanitarian aid” to the people of Venezuela, adding: “It’s time for Maduro to get out of the way.”
Firing back, Venezuelan Foreign Minister Jorge Arreaza accused the US of waging “unjust wars” and subjecting “economies to a blockade,” while causing “death, hunger, destruction and suffering.”
--- ---
...