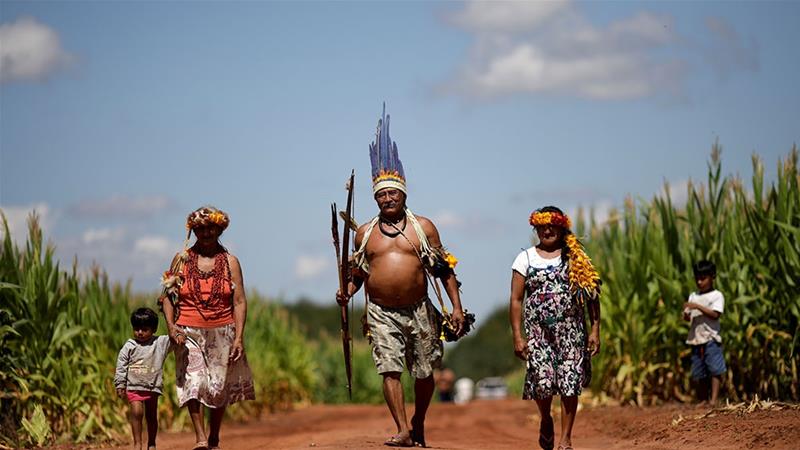 * * * On Wednesday, several indigenous organisations gave the Inter-American Commission on Human Rights, hosted in Bolivia a grim joint report.
The report, obtained by Al Jazeera, details a sharp uptick in attacks on indigenous people since Bolsonaro won the presidency in the October 2018 elections.
In less than three months, the report says, at least 16 attacks on indigenous communities in Brazil were documented. In addition to four homicides, the report recounts stonings, deforesting, threats and arson.
Cosigning the document presented to the commission were the Coordination of Indigenous Organizations of the Brazilian Amazon (COIAB); the Articulation of the Indigenous Peoples of Brazil (APIB)l; Articulation of the Indigenous Peoples of the North East, Minas Gerais and Espirito Santo (APOINME); and the Indian Law Resource Center (ILRC).
According to the report, indigenous communities have seen healthcare centres set ablaze, been firebombed by farmers, and shot at with rubber bullets. Many were injured, and some were killed.
"For 519 years indigenous people know what violence is," said Angela Amanakwa Kaxuyana, coordinator at COIAB.
"The difference is that now these attacks are institutionalised, as in the president himself incites hatred," she told Al Jazeera from Bolivia.
And as attacks ramp up, according to the indigenous groups, Bolsonaro has started dismantling many of the bodies responsible for protecting native land rights, paving the way for more land grabs.
Prior to Bolsonaro's ascent to the government, the National Indian Foundation (FUNAI), part of the Ministry of Justice, oversaw indigenous rights issues.
But after Bolsonaro took office, he divided FUNAI's responsibilities between the Ministry of Human Rights and the Ministry of Agriculture, which now controls land designations.
'Opening the door to enemies'
Bolsonaro's picks for both ministries' heads has sparked yet more controversy.
Bolsonaro chose Damares Alves to lead of the Human Rights Ministry. However, Epoca magazine has accused Alves of kidnapping her indigenous adopted child, an allegation which Alves denies.
Heading up the Ministry of Agriculture is Tereza Cristina, who has called for reappropriating indigenous lands for commercial farming.
Cristina also presides over the so-called rural bench, one of the most influential parliamentary groups, which the report says is aligned with the agriculture industry's interests.
"We considered the new minister might subordinate the rights to indigenous lands to the expansion necessities of the farming industry," reads Wednesday's report.
COAIB coordinator Kaxuyana added, "That's like opening the door of indigenous lands to our enemies."
Brazilian officials did not respond to Al Jazeera's interview requests to comment on the report's allegations.
The Ministry of Justice said the matter was now in the hands of the Ministry of Human Rights. However, the human rights ministry said the request should be addressed to FUNAI, which said that no one was available for comment.
Meanwhile, the Ministry of Agriculture said it only dealt "with new cases of land designation", without clarifying which ministry could comment on land grab allegations.
"Unfortunately we are not seeing any action from the responsible authorities [regarding the attacks]", said Cleber Buzzatto, executive secretary at CIMI (Indigenous Missionary Council).
"We consider this change by the Brazilian government very negative, since the agriculture ministry has a history of acting in favour of the agribusiness's interests," Buzzatto told Al Jazeera.
"These are organisations with intense anti-indigenous action. In our view, giving responsibility of land designations to this structure means the government will violate the constitution."
Brazil's Prosecutor General Raquel Dodge said in a conference in January "there can be no backsliding on public policies toward the indigenous people".
The United Nations Special Rapporteur on the rights of indigenous peoples, Victoria Tauli-Corpuz, also urged Bolsonaro to comply with international agreements signed by Brazil that guarantee protections for native groups.
'Now it's OK to kill'
Luiz Eloy Terena, a lawyer from APIB, said Bolsonaro's ideas were like "saying it is now ok to kill [the indigenous]".
Speaking to Al Jazeera by telephone from Bolivia, Terena insisted that the indigenous rights groups would "continue to bring the indigenous fight to the international stage".
While campaigning, Bolsonaro appealed to a large swath of farmers by promising "to not demarcate another centimetre of indigenous land" for protected status.
But rights groups insist policies like these threaten the safety of indigenous people and could harm the country's vast environmental wealth.
As of now, reservation lands untouched by farming constitute 12 percent of Brazilian territory.
But of the 700 indigenous territories nationwide, at least a third are still waiting for official recognition and protection. With Bolsonaro in office, indigenous people and rights groups fear these lands are at even greater risk.
The situation had worsened even before Bolsonaro took office. Between 2017 and 2018, deforestation increased by 124 percent and incursions by 62 percent, according to the CIMI group.
Meanwhile, indigenous communities endured a record-high 110 killings and 128 suicides.
SOURCE: Al Jazeera News