Iran-stranded Boeing airliner took off and expected in Sweden 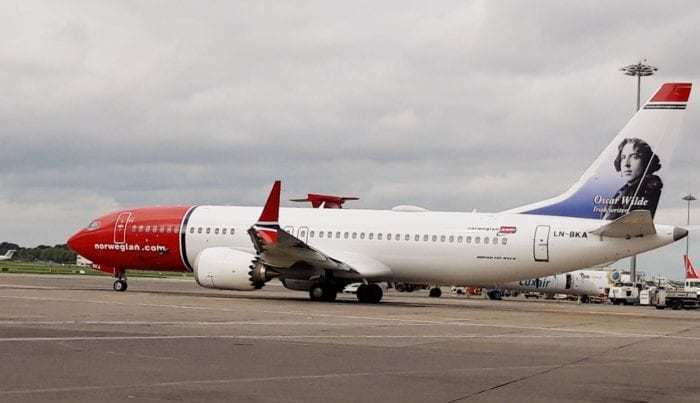 By Lefteris Karagiannopoulos
OSLO (Reuters) - A Boeing commercial airliner that belongs to budget carrier Norwegian Air and was stranded in Iran after an emergency landing in December, took off and will arrive in Sweden early on Saturday, a Norwegian Air spokeswoman said on Friday.
The plane, a 737 MAX model, took off from Dubai on Dec. 14 bound for Oslo but had to land in Shiraz in Iran because of problems with one of its engines. It had stayed there since, tied by delays over local regulations and waiting for a new engine.
Spare parts were needed by its manufacturer Boeing, but because of U.S. sanctions reinstated by the Trump administration, civilian aircraft sales, including servicing and parts, were forbidden in Iran.
"Norwegian's Boeing 737 MAX has taken off from Shiraz Airport in Iran and will land at Stockholm Arlanda Airport early Saturday morning. After two months in Iran, it’s a big relief to finally get the aircraft back home," airline spokeswoman Astrid Mannion-Gibson said in an email.
The U.S. Embassy in Oslo was not available for comment. Boeing was also not immediately available when contacted.
Norwegian had said on Wednesday that it was in the process of having a new engine flown to Iran but the spokeswoman did not elaborate further on Friday.
Any product that contains more than 10 percent of U.S.-origin goods or technology require a U.S. license in order to be sent to Iran.
Norwegian Air has previously said that the paperwork needed to service the plane had taken longer than usual, partly because the company had to familiarise itself with regulations in Iran, where the firm does not operate.
The 186 passengers and six crew that were onboard on Dec. 14 were able to fly out of Shiraz the next day.
(Reporting by Lefteris Karagiannopoulos; editing by Grant McCool)
--- ---
...

The strange case of a Norwegian plane stranded in Iran's 'Bermuda Tria...

thenational.ae 10/01/2019 Auto
Low-cost airline Norwegian Air has had a jet grounded in Shiraz for weeks *** A Norweigian Air Shuttle plane is stranded in Iran after an unscheduled ...View Details»