Darak, where the desert meets the sea 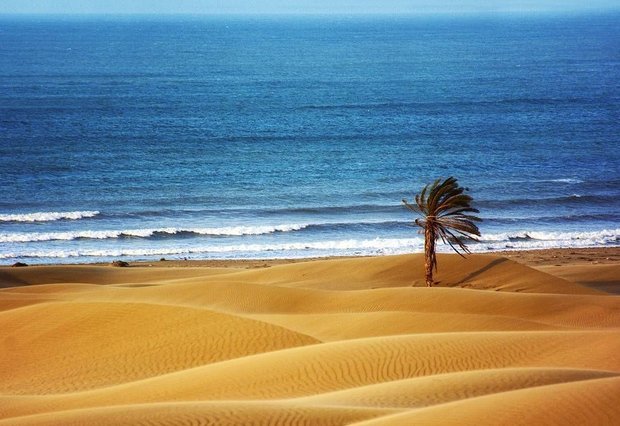 TEHRAN, Feb. 23 (MNA) – The coastal village of ‘Darak’ can be found in the southernmost tip of Iran, on Mokran's shores, stretching along the Sea of Oman. It is one of the most stunningly pristine beaches in the country.
The village is a potential touristic site, which enjoys all three types of the cliff, sandy and coral beaches in the vicinity.
Darak or ‘Darag’ in the local language means settling along the sea. It is where the burning sands nestle in the arms of the free waters.
In the coastline, the waters of the Gulf of Oman and the Indian Ocean collide. The perceived coastlines of the sands and palm trees create wonderful scenes. 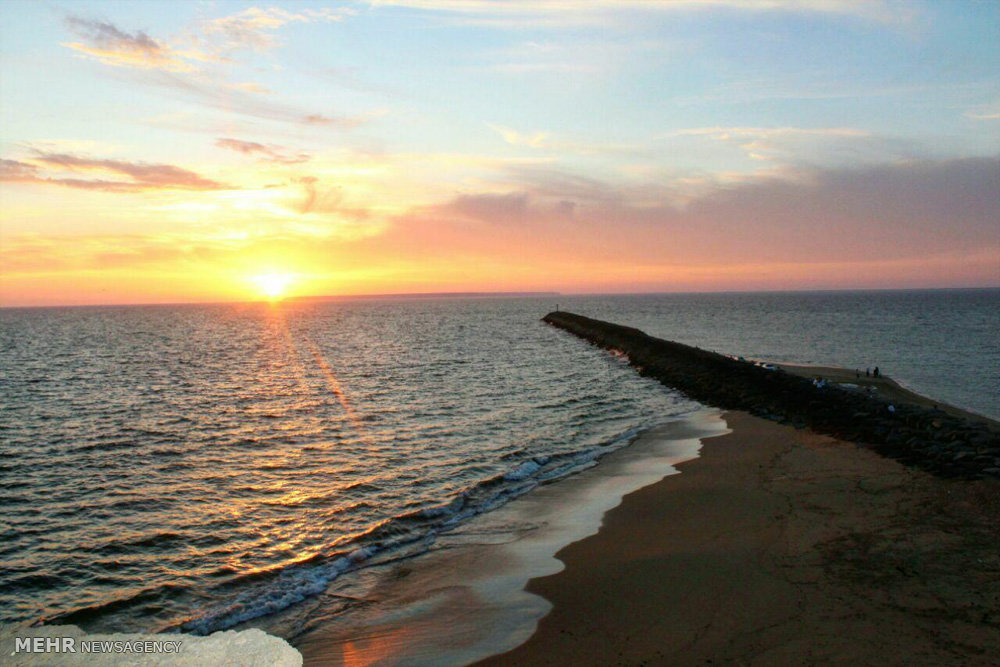 Location
The village forms a part of Zarabad County in the borders of Konarak. It is 19km from Johlou, the capital city of Zarabad. From the east, Darak is linked to the coastal village of Jod, and from the west it borders Poshti Village. Mountains embrace the village from the north and the sea from the south.
Abandoning the usual tourist routes, one could take an unknown route to venture into Sistan and Baluchestan. Trotting along the mild path, we will reach its sandy shore that offers a unique spectacle.
This village is located between two important southern port cities: Chabahar and Bandar Abbas. The sand hills, shores, corals, rocks, mountains and surrounding forests, and the unspoiled and domesticated nature can all be seen in the same place.
Thanks to the efforts of the indigenous people and officials, this village has kept its purity and beauty. Interestingly, it does not appear on Iranian maps and you have to look in English maps, or look for the term "Darak Coast" in English or Darak Beach to geolocate.
Tourist sites and entertainment
Darak has a pristine shoreline. It is known for its extraordinary beaches. However, fortunately or unfortunately, its tourist potential has never been exploited and no tourist development has been realized. It is a site for those who are looking for the authenticity and charm of this unspoiled coastline.
The sand dunes and the extended coast are a good combination for cycling enthusiasts. Roads in this region are also suitable for motorized leisure activities, including off-road.
Along the Chabahar road in the village of Darak are temporary signs indicating access to one of the most beautiful coasts of Iran. This road is itself a tourist attraction by the landscapes that it presents to the eyes, but also by the sporty driving that it requires - it is thus preferable to take this road with a car adapted to all types of ground.
The most obvious recreation at the seaside is swimming. The place is also very good for all kinds of water activities, from surfing to diving. But again, no development has been done and it must become equipped.
Picnics, photography and hiking
The village, in itself, is worth seeing. Do not hesitate on the way to stop for a picnic under the shade of a palm tree. Hiking trails abound and compete with the coastal path. The hikes are made in forests and palm groves up to the sky, always with a view of the coast of sand and coral. The sunsets are also of unique beauty. 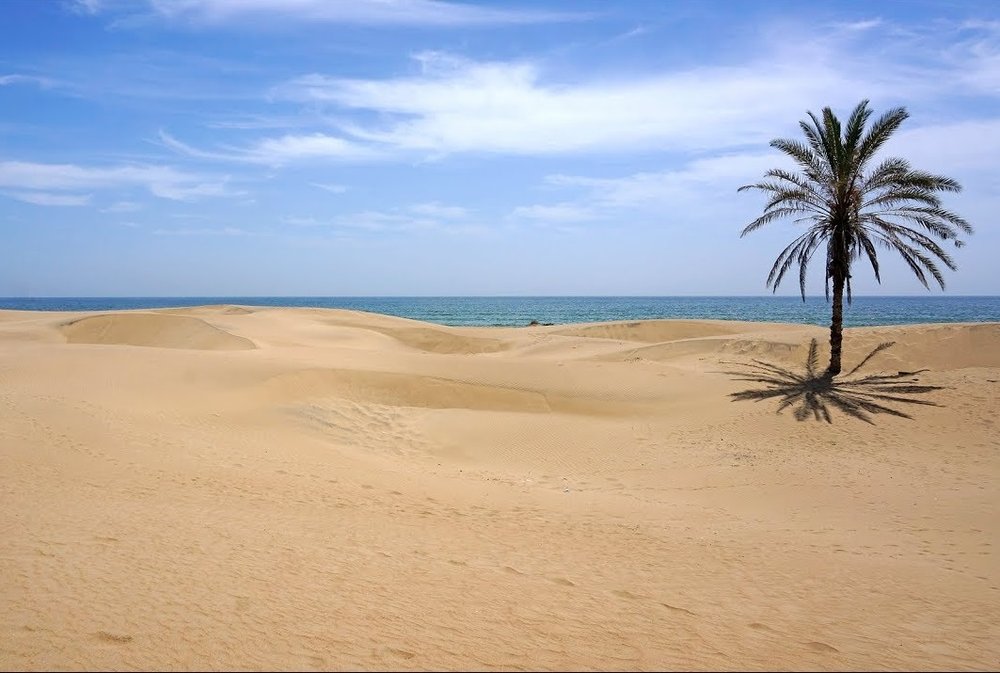 Best season to travel
The province of Sistan and Baluchestan is one of the hottest provinces of Iran. It rarely rains there, let alone in the years of drought. Nevertheless, the Darak village enjoys a spring climate most of the year. It is due to the refreshing winds that come from the Indian Ocean.
The best time to visit Darak is spring, from early to mid-season. After that, the heat of summer may reduce the pleasure of this trip. Summer remains a season to avoid due to high temperatures.
The beginning of autumn is still warm in the province, but the monsoon winds allow Chabahar and the littoral zones to benefit from a little more freshness. It is quite possible to go there in the fall, although it is better to wait until the second half of the season. Winter is also a good season to visit the village of Darak.
Inhabitants of Darak
The inhabitants of Darak belong to the Balouch ethnicity and speak Baluchi. Men's clothing consists of shalwar kameez. It consists of very baggy pants. The kameez is also loose, which traditionally is long with long sleeves. The Balochi shalwar kameez is similar to the styles worn in Afghanistan.
The female Balochi suit consists of the head scarf, long dress and a shalwar. Balochi women wear loose dresses which are embroidered in colorful designs that are particularly renowned for the finesse of their embroidery.
The inhabitants of Darak mainly do fishing, but they also practice agriculture as a secondary activity. The kindness of these people is proverbial. It is common that visitors and travelers are invited to enjoy delicious local dishes, seasoned with traditional spices, where the ancestral culinary know-how of the women of the village is tasted. According to the latest censuses, Darak is populated by less than 500 people, making up over a hundred households. 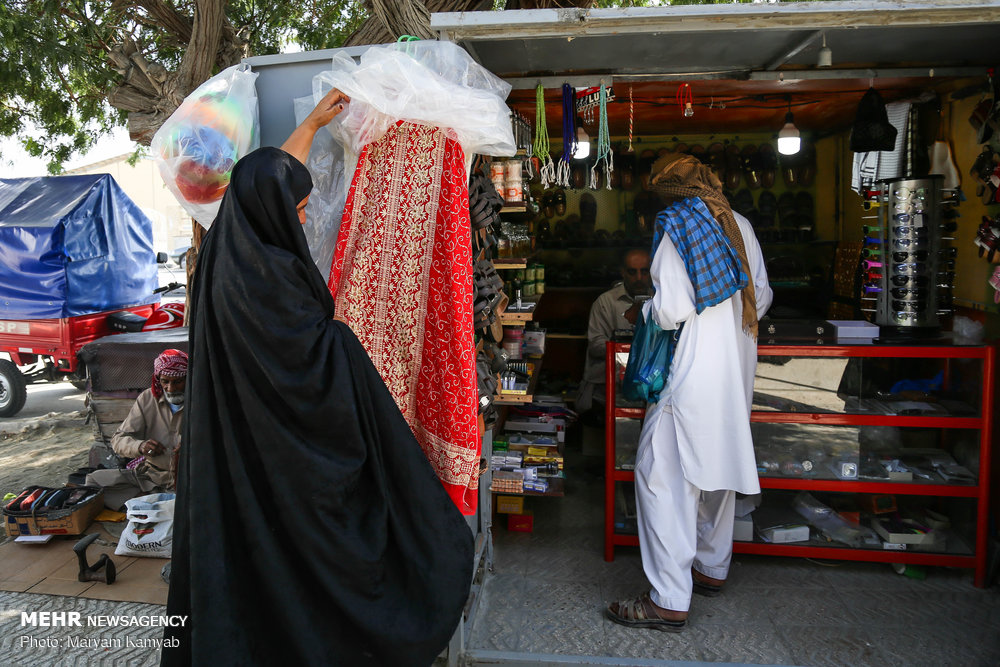 Therapeutic virtues of Darak coastal dunes
One of the interesting aspects of the coast of Darak village is the existence of white sand hills that, according to locals, have healing properties for muscular and bone pains. In order to cure these pains, they lie on the sand early in the morning, when the sun shines high in the sky.
Darak is a rather green place, and one wonders how the palms grew on this hot desert coast. This is another oddity of the village: this place nestled near the sea and located in a hot and dry area has fresh water, just a few tens of meters from the sea. fresh water exists less than two meters deep.
This water is the origin of the forest and the variety of tropical species existing there. The inhabitants use fresh water to cultivate and harvest watermelon, corn, palm trees, etc. Side by side with these fruits, you will also see different species of acacia nilotica and fig trees pagodas.
Acacia nilotica (the red gum) is a species native to East Africa and the Indian subcontinent of the family Fabaceae, which also grows in Tchabahar in southern Iran. This tree has therapeutic virtues.
The fig tree of the pagodas is a tree belonging to the genus Ficus religiosa of the Moraceae family. It is a sacred tree according to Hinduism and Buddhism.

Chabahar Port in Iran: Challenge for India to upgrade it on war F... newdelhitimes.com 06/06/2015 Economy
The Chabahar Port project is in the interest of everyone, especially Afghanistan, whose only access at the moment is through Karachi Port hence subjec...View Details» Why Iran's infra push is good news for India...

business-standard.com 30/08/2016 Economy
By Kunal Bose August 30, 2016 To the advantage of Indian steel and mineral industries, there is a fund of goodwill for this country in Iran, which ...View Details»