Trump pumps new poison into US confrontation with Iran 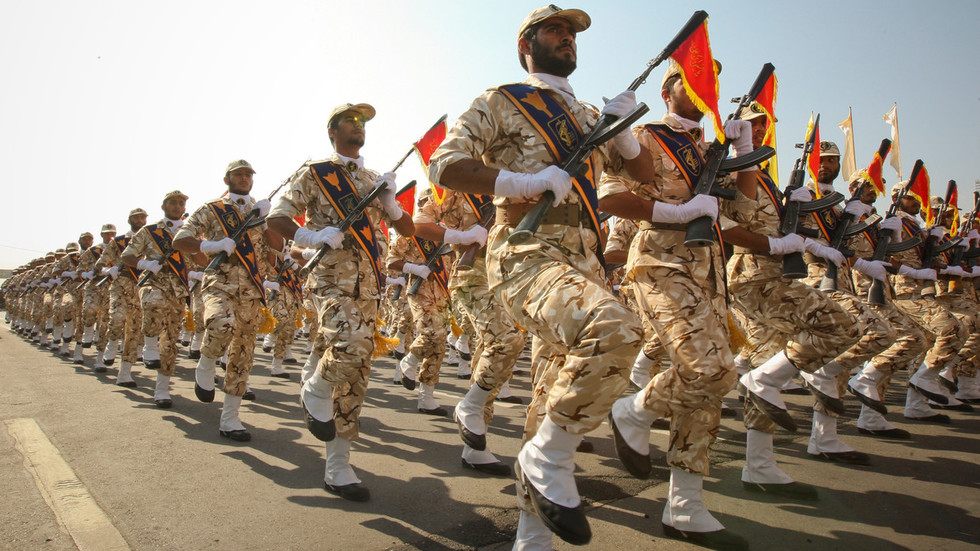 The US action against Iran’s Revolutionary Guard is a dangerous escalation which can only endanger a fragile world peace and widen the breach between the Trump administration and many of its closest allies, principally the EU.
FILE PHOTO: Members of the Iranian revolutionary guard, September 22, 2011 © Reuters / Stringer

* * * On Monday, the US designated Iran’s Revolutionary Guards (IRGC) as a “terrorist organization”.
It is the equivalent of declaring the US Marine Corps a terrorist organization, though with much less justification given that Iran hasn’t invaded another country for centuries. Washington’s description of Iran as “expansionist” is enough to make a horse laugh given the world-wide projection of US bases and military hardware around the world – and around Iran.
It is the first time ever that a US government has designated a part of a foreign government as a “terrorist organization”. Anyone doing business with Iran will have no way of knowing if they are “bankrolling terrorism” by doing so, and that of course is the point.
Taken in the context of the stand-off between the US and Venezuela, the disturbing nuclear cooperation between the US and Saudi Arabia, the ever-closer relationship between the Trumps and Israel, the ongoing crisis in US-Russia relations, and the escalation against Iran shows a mighty American over-stretch which can only lead to tears – and blood.
Any one of these dangerous confrontations would be risky, any two terrifyingly so. All of them taken together would tax the ability of any empire even in its pomp. For the American empire, well past its height, beset by looming economic problems and utterly riven by internal political division, it looks an impossibility, though many and much might be destroyed in the attempt.
The 2003 invasion of Iraq was for oil, to be sure, and for Israel also. But its principal goal was to demonstrate the hegemony of the American Empire. A declaration that this was a new American century. The result proved the exact opposite, and that before the renaissance of Russia under Putin and the long awaited arrival of China on the world stage packing a military and political punch commensurate with its economic importance.
The ill-clad, ill-equipped (and warring) militias in Iraq soon made the country ungovernable and US withdrawal from the streets inevitable.
The result – as anyone with knowledge could have predicted – has been the Finlandisation of Iraq, increasingly closely coordinating with Iran next door. Destroying the Arab Sunni power in Baghdad could only lead to the strengthening of Shia Iranian power there. And so it has.
Iran is now too big and powerful for the US to fight – short of using nuclear weapons. The Revolutionary Guard is as intrinsic to the Islamic Republic as any other organ of the state, bar none. In fact, without the IRGC, there is no Islamic Republic. The Guard is not just a fearsomely strong military force, its political and economic reach in the state also renders it internally untouchable. No Iranian government would, or could, move to trim its strength.
Thus, Washington actually declared war on Iran this week. A threat to the IRGC is an existential threat to the state and will be treated as such by the Iranians.
Iran has the ability to hurt US interests throughout the region – in Iraq, in Yemen, in Syria, in Lebanon and, please note Mr Trump, in Saudi Arabia itself. Not to mention that without the Straits of Hormuz, there is no Western economy. Its closure would bring most economic activity to a shuddering halt, moving the oil price into undreamt of heights.
The new sanctions, a prelude to a new phase for sure, will radicalize the politics of Iran, marginalize the moderates in its government, and unite the vast majority of Iranians behind their government and the IRGC. Europeans will refuse to go along with it. If the US seeks to punish them for doing so, it will further antagonize European allies, weakening NATO, and reduce support for other American foreign policies. It is all a far-cry from the America-First campaign cry of Trump’s election. Allowing a Bernie Sanders presidential run, a target-rich environment.
By George Galloway
George Galloway was a member of the British Parliament for nearly 30 years. He presents TV and radio shows (including on RT). He is a film-maker, writer and a renowned orator.
--- ---
... rt.com 28/08/2013 News
Eric Draitser is an independent geopolitical analyst based in New York City and the founder of StopImperialism.com. As the United States, along with ...View Details»